A third of smartphone users in seven nations will spend 20% less on next device: survey

One in three smartphone users will cut their spending on their next device by a fifth or more, the technology analyst firm Counterpoint Research says, adding that this was due to the reduction in economic activity across the globe due to the COVID-19 pandemic.

A total of 2200 consumers were surveyed in seven countries: the US, the UK, India, France, Germany, Spain and Italy. The smallest number surveyed in any country was 200; in most countries it was more, ensuring that the samples were always statistically significant.

In a statement, the company said it found that about half of the total number expected to delay the purchase of their next smartphone. Indian consumers (61%) were the ones who planned to wait the longest before getting a new smartphone.

Counterpoint senior analyst Pavel Naiya said: “The coronavirus outbreak and future income uncertainty has affected consumer behaviour with many strictly limiting purchasing to only the essentials.

"Smartphone consumers from Spain and Italy are the most affected. Consumers intending to cut their future smartphone purchase budget by 20% or more are highest in Spain (27%) and Italy (25%), followed by the US (24%). Looking at the current circumstances, we expect this trend will continue until mid-2021.” 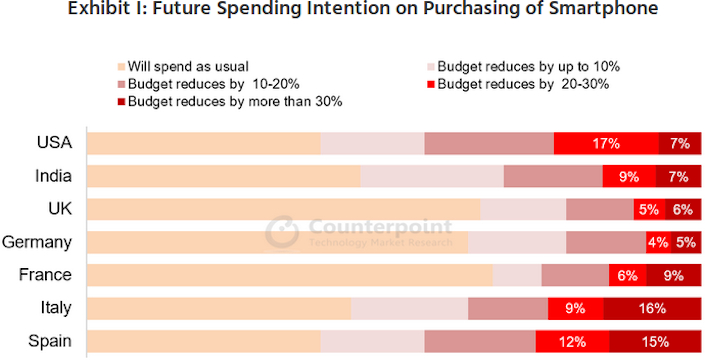 The Counterpoint survey also found that due to social distancing, two-thirds of those surveyed in India and more than half in both Italy and the US were looking for what was described as a "low touch" sales channel. This meant more online orders with home delivery and also online orders that were collected from a store, the latter known as online-to-offline or click-and-collect.

Counterpoint research associate Arushi Chawla said: “We have seen many initiatives taking place in developing countries like India in the early phase of the lockdown period. Xiaomi started the Mi Commerce Web app to connect consumers with the nearest retail store.

"Samsung has strategically partnered with Benow to help retailers register their inventory on its platform. vivo’s Smart Retail [enables] customers to send their product-related queries to retailers through SMS and reach out to the e-store or official Facebook page for order placing. And OPPO customers can order deliveries or raise service requests on WhatsApp or via SMS.”

Given that the first case of coronavirus was detected in Wuhan, China, Counterpoint also sought to find out consumer sentiment about smartphones made in China. The company found that anti-Chinese sentiment was highest among Indian consumers, with more than half having a negative attitude towards products made in China or Chinese smartphone brands.

Adding to this depth of feeling was the recent border clash between Indian and Chinese troops.

About a fifth of the US respondents said they preferred not to buy products made in China.

The country-level consumer highlights from the survey were:

More in this category: « Huawei delaying next Mate release until it sorts out chip issues: report 5G fixed wireless access opportunity for mobile operators, says Nokia »
Share News tips for the iTWire Journalists? Your tip will be anonymous