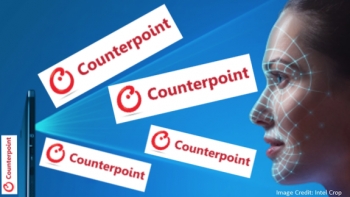 The latest research expects plenty more handsets featuring facial recognition in 2018 alone, with the figure to grow to over a billion by 2020.

With Apple's advanced Face ID technology, preceded by less powerful but still effective face and iris scanning unlock tech in Samsung's most recent flagship smartphones, the cloners and copiers have already begun. The research comes to light just as a facial recognition bill has been introduced into the Australian Parliament.

Oppo's latest R11s and R11s smartphones boast of having an AI-enhanced face detection camera, which in my tests works far better and faster than any of Samsung's equivalent technologies.

Clearly, plenty more facial ID equipped smartphones are on the way too, with those aforementioned billion-plus smartphones "to feature some form of face unlock solution in 2020".

The information comes courtesy of research firm Counterpoint, which notes that "when Apple announced Touch ID in 2013, it set a trend in consumer mobility".

This move led to "smartphone OEMs around the world" following Apple’s example and "integrating fingerprint sensors into their own devices".

As we've seen, OEMs did this "to such an extent that fingerprint-based security is now considered standard issue on even budget-priced smartphones".

As a result, Counterpoint estimates "more than a billion smartphones will be shipped in 2018 sporting fingerprint sensors" as previously forecast here.

But fingerprint readers are one thing, offering on iPhones a 1 in 50,000 chance of someone else having a fingerprint similar enough to unlock your phone.

Face ID has a 1 in 1,000,000 chance of being fooled, and thus, with Apple having launched Face ID, Counterpoint openly wonders whether if Apple is "permanently ditching Touch ID for contactless authentication".

"Either way," says Counterpoint, "Apple’s rivals will adopt similar technology during 2018, which could lead to facial recognition becoming the de-facto standard for unlocking phones and the gradual elimination of fingerprint sensors in smartphones.

"Apple’s Face ID generates a 3D depth map of the user’s face that is achieved by the multiple sensors in its iPhone X. On the contrary, other players like Samsung rely on 2D facial recognition coupled with an iris scanner.

Counterpoint then points to its "Component Tracker estimates" which is where the figure that "more than a billion smartphones will ship with facial recognition in 2020" is found.

No surprises for guessing that "Apple and Samsung are likely to lead the pack for this new technology adoption," with the usual set of Chinese players like "Oppo, vivo, Xiaomi, OnePlus, Huawei and others" no doubt trying to catch up as quickly as possible

Commenting on the research, senior analyst Pavel Naiya said: “The diffusion of facial recognition technology into lower tier price bands will be faster than any other flagship feature due to 2D facial recognition being native on the Android platform.

"However, according to our estimates, close to 60% of all smartphones with facial recognition, will use 3D technology in 2020. Data collected from multiple 3D sensors will assist emerging technologies like augmented reality, virtual reality and artificial intelligence to widen their use cases.”

Naiya added, “Sensor fusion will be more relevant than ever. It will likely open a new era of partnerships between OEMs (as data providers) and chipset manufacturers (as platform providers), to stay ahead of the race to democratise new technologies.

"We believe, new platform players will evolve in the smartphone component ecosystem by leveraging machine learning, data processing and sensor data to provide unique features in the latest smartphones.”

Counterpoint says that "a recurring theme when discussing biometrics is the balance between security and convenience, with the consensus being that convenience is generally more important than security to most consumers".

This leads organisations to ask: "But is facial recognition really a more convenient way to unlock a phone than fingerprint sensors?"

Peter Richardson, research director at Counterpoint Research, said: “There are certainly situations where looking directly at a smartphone will be inconvenient, such as when walking briskly along a crowded street.

“In such cases, a fingerprint sensor may well be more convenient and quicker as it does not require the user to look directly at the device and could even be unlocked as it is being removed from the user’s pocket or bag.

"Although Face ID may not be the most convenient way to unlock a phone under all situations, it is well-suited for applications that require higher security, such as mobile payments, and where speed is not necessarily of essence.

"In such cases, consumers may be happy to wait longer, say two to three seconds, in return for a much higher level of security, such as when purchasing an expensive item using their phone,” Richardson concluded.

While there has been an undeniable trend towards contactless authentication during the past few months, predominantly to accommodate larger screens, Counterpoint Research "believes that the fingerprint sensor is far from dead."

So, what of "hardware versus software-based authentication?"

Clearly, state Counterpoint, "Face ID will have a much wider application beyond authentication, including augmented reality and other applications which require accurate and sophisticated 3D sensing technology".

"However, cost issues will limit hardware-based 3D sensing to high-end phones, at least for the time being. This will create an opportunity for software-based facial recognition systems that can capitalise on the interest in facial recognition generated by Apple’s iPhone X and deploy these solutions in all but the premium flagship models."

Commenting on the technology potential, Counterpoint's Neil Shah said, “The use of AI-based machine learning algorithms coupled with ever faster processors, means that the latest software-only facial recognition technologies are able to overcome many of the traditional drawbacks of 2D face recognition and could become a real alternative to Face ID, at least for unlocking phones.

“Using technologies such as convolutional neural network-based algorithms and video-based ‘liveness detection’, companies such as FaceTec and Sensory claim that it is virtually impossible for a third-party to spoof their facial recognition with photos or video of the phone’s owner.” 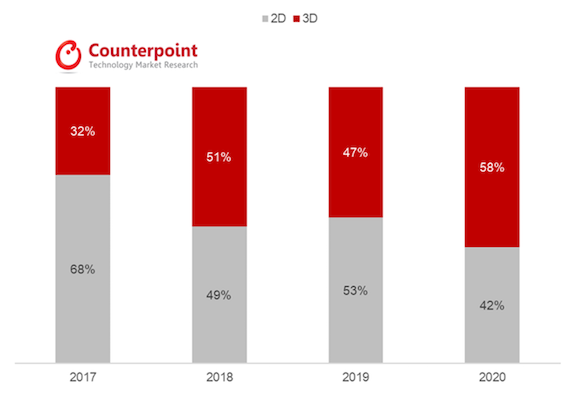 What does this mean for using a combination of biometric technologies?

In future, Counterpoint Research expects mobile devices "will combine biometric sensors for the face, iris, voice and fingerprints. Rather than competing against each other, each biometric technology will be layered on top of each other with the most convenient and least intrusive being selected on an application by application basis".

Shah adds, “In 2018 we expect all leading handset manufacturers to launch flagship handsets with facial recognition capability. Some will also be inspired by Apple’s ‘notch’ design, though this won’t be necessary in every case to deliver the face recognition technology – it will be more of a fashion statement.

“In addition to flagship products, we expect 2D face recognition will find its way into mid-range products from leading Chinese handset brands.”

"However, in this forecast, we only considered dedicated software/hardware functionalities provided by OEMs as facial recognition feature."

More in this category: « MNF recycles Pennytel brand, aims at over-50s CBA adds Samsung Pay to MasterCard options »
Share News tips for the iTWire Journalists? Your tip will be anonymous