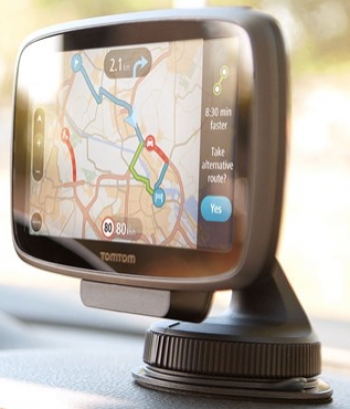 TomTom finally gets lifetime maps, speed camera and traffic updates**** – about time as this has been the only thing holding back this otherwise renowned brand!

iTWire colleague Stephen Withers reported last week on TomTom’s ‘change of heart’ and judging from reader feedback this is a long awaited move. The free updates only apply to the GO 510/610 and the premium GO 5100 (5”) and GO 6100 (6”) – they also include TomTom world maps (157 countries - Africa, Europe, Middle East, South America/Caribbean, Southeast Asia, and USA/Canada/Mexico) so you can use it overseas for no extra cost.

The screen is bright enough for in-car use. It is not entirely suitable for pedestrian use in bright daylight.

It has 8GB of ram and a microSD slot with 32GB support for additional maps.

I like to read a full manual first. It comes with brief multi-language guide that does not tell you a lot. TomTom’s user interface is intuitive so no big deal.

But the device is not listed on the on the Getstarted page, and when I enter the serial number, the web page freezes. You can find a generic, 111 page GO manual that covers the software interface.

As I have reviewed and owned TomTom devices before including smartphone software – but no longer do - it would not allow me to link this device to my existing ‘account’ nor would it allow me to delete devices or the account. I had to use another email address to link the device – later I found Multiple devices: If you have multiple TomTom navigation devices, you will need to create a MyTomTom account for each device. You need a separate email address for each MyTomTom account.

Sorry this is not good enough and TomTom needs to enable multiple devices to the one email address.

It has the usual TomTom curves – rounded edges and a black bezel. Pleasing enough and does not create too much reflection on the windscreen.

It has quick GPS – it estimates the position of GPS satellites and then hones in. At worst 15-20 seconds when you get on the road – a minute or so after a full power down and reboot.

The claim is 2 hours battery life – I got around 70 minutes. A full recharge from empty takes about 3 hours using a 2.1A USB charger (not supplied).

I like the new tap/hold function that allows you to tap on a road on the screen and drive to it. There is also a Drive Home and Drive to Work function.

Advance lane guidance is good – it is easy to see what lane to take although intersection coverage is not as widespread as I expected.

It has speed limits and displays current speed. If you exceed the limit by 5km/h, there is a visible warning.

It has quick search allowing you to enter the address in number, street, suburb format – or whatever and it will give back destinations in order of distance from you. You can also search for POIs, postcodes, or even GPS co-ordinates.

The screen is touch enabled for pinch zoom, and swipe.

The Route bar gives a visual indication – via a side bar – of the distance left, estimated time of arrival, any traffic issues, speed cameras and petrol stations on the route. You can also find parking stations.

TomTom uses its own maps – it has its roots in a Dutch map-making company Tele Atlas and perhaps that explains why it has sold map updates until now. It also supplies some maps to Apple but that company is steadily building its own mapping database. Globally it covers about 44 million kilometres and claims 99.9% coverage in Australia.

HERE (Nokia) has similar claims but the latter supplies about 80% of navigation system maps and has more local Australian resources. I could not spot any major differences between map systems in terms of accuracy.

It provides traffic updates via the SIM typically using government transport department feeds. It is different to SUNA used by Navman, Garmin, Navigon, and Magellan. I am not sure if it is any better or worse but its certainly quick to load and update.

TomTom now allows third party Points of Interest (POI) to be imported in .ov2 format into this model.

It does not have Bluetooth for smartphone hands-free use.

The ‘Click and Go’ mount supplied has a suction cup for windscreen mounting. The image shown in this review shows it dash mounted – this requires an A$12.95 dash mount disk to convert. It comes with a micro-USB right angle cable and a single port USB, 12V cigarette car charger.

It does not come with an AC charger and requires at least a 5V, 1.2A USB charger (not the typical USB 2.0, 500mW charger port found in many cars). There is an optional dual port car charger that apparently has 2 x 2A ports so it could be used for later smartphones and as a tablet charger as well. It does not use the older TomTom ‘O’ mount system.

It has voice command activated by Hello TomTom (changeable). I did not use this feature extensively but it was good to be able to cancel the current route and change views. It was not good at getting my Australian accent and even more hopeless at setting a destination. I think with time and perseverance I could make this a less frustrating experience – but for now TomTom is willing but dumb!!!

A new MyDrive cloud service lets drivers use their smartphone, tablet or PC to review real-time traffic information, plan routes, and send destinations to their TomTom Go before they get in the car. An app for iOS and Android is available as well as Windows and Mac. This feature is dependent on mobile data coverage.

No so you cannot use it for a reversing camera or video playback.

It feels well made, the screen is responsive, and it does all that is expected of a portable in-car navigation device. GPS units are not sexy or exciting but the inbuilt SIM has potential.

Analysts state that TomTom is struggling to keep dedicated PNDs relevant against massive inroads from HERE, Navteq, and Google on smartphones and phablets. I still think a good PND is far better for everyday use than a smartphone but real innovation in this area has been lacking for some time. If the SIM works as promised it is good innovation.

The MyDrive cloud feature is good but it does rely on the SIM and a data connection to be effective. I like to be able to pre-plan my route, especially on longer trips. The alternative route system – to avoid tolls or go another way – is adequate but a little slow and needs work. By comparison, Navman displays up to five routes you can select from – tolls, fastest, shortest, eco-friendly, etc.

Some time ago, I changed my recommendation from TomTom – mainly due to the absence of free lifetime maps and traffic - to Navman and the excellent HERE (Nokia) maps. I use the Navman My Escape III – a 7” GPS unit that is particularly good for long-sighted drivers – those who can read street signs hundreds of metres away but the dashboard is fuzzy.

I am not going change my recommendation for this premium A$399 model but am happy to add the TomTom GO 6100 also at $399 as a worthy contender – albeit with a 6” screen and no Bluetooth. I suspect TomTom will have a few firmware and software updates on this model – it does not seem quite as polished as I have come to expect from this brand.