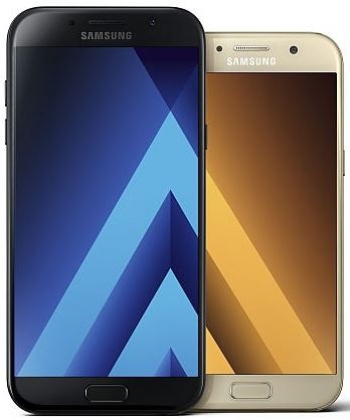 Samsung trickles down the features from its premium Galaxy S series to next year’s mid-range A series. There is a lot on offer in the 2017 Galaxy A5 and A7 – feature for feature it is not too far from the popular Galaxy S6.

I admit to being spoilt in the smartphone stakes – most of my reviews are premium flagships and sometimes it is hard to come back to earth. But less than 10% of Samsung’s sales are for the premium Galaxy S class series. A massive 84% of the population buy lower cost devices as proven by OPPO, ZTE, Huawei and the strong sales of last year’s flagship models at lower prices.

Not that $649 for the A5 or $799 for the A7 could be considered cheap but it does fit into iTWire’s test paradigms as a mid-range phone and should be rated accordingly.

You probably need to assign a “mental” premium on the Samsung brand over some others because of its amazing local Australian support, it’s ISO-certified manufacturing, extremely low fault rates, longevity, and frankly everything works well – it is a class act.

I was provided with the smaller, 5.2” A5 to test. As you will see from the specifications the only real difference between it and the 5.7” A7 is a larger battery.

Interestingly, Samsung Australia did not bring the previous Galaxy A 2016 model here because the Galaxy J series (lower specified) was doing so well and Australia has a larger middle class that can afford to buy the Galaxy S series.

The A5 comes in a typical Samsung cream box with a fast charger (5V/2A and 9V/1.67A), a USB-C to USB-A cable, a pair of Samsung standard buds/mic, and both USB-A female to USB-C and micro-USB to USB-C adaptors (to assist in data transfer). 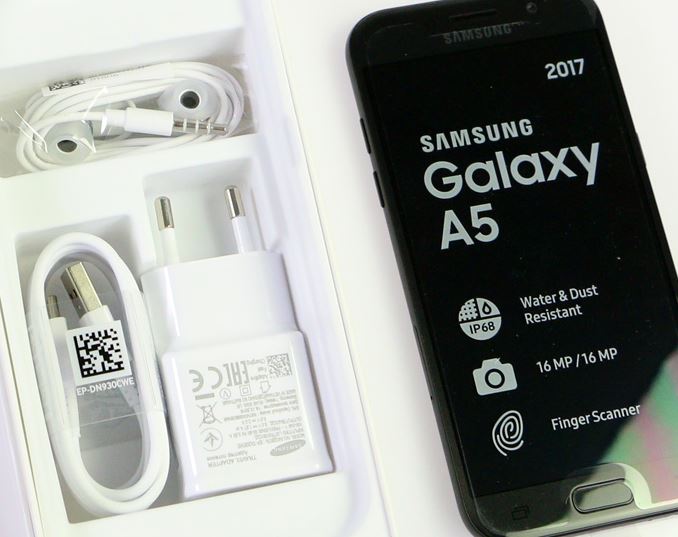 Set-up is easy. It can clone any Google accounts (or avoid them). It includes Samsung Smart Switch that will effortlessly copy almost everything from another Android, iOS, BlackBerry and Windows Mobile either by NFC Bluetooth, direct cable, or via Windows or Mac. In my experience, this is an amazing app – even transferring iTunes over.

The A5 has separate slots for the single SIM and microSD card – that scores heavily over typical multi-use dual SIM slots.

Looks-wise, it is a typical black (or gold) glass slab with rounded edges and a fingerprint magnet gloss back. The back has no camera protrusion and sits flat on the desk. Capacitive back/home keys don’t eat into the screen – they are in the bottom bezel, so top marks here too.

Unlike most phones, there are no ungainly plastic antenna bars evident. Samsung has followed the S8 design cues by placing the main antenna in the lower bezel. Build and materials quality are top class and it has a nice feel in the hands.

The camera is a reasonable all-around performer, but a little lacking if compared to the brilliant GS6 and GS7. That is not meant to be too critical – most users will be very happy with it, but if you want better photography look around for a bargain on a superseded Galaxy S6.

In daylight to early evening, it took competent, colourful shots, but manual HDR, lack of optical image stabilisation, slower autofocus, and smaller pixels (than the GS6/7) meant low light shots were not to the Galaxy standard I expect.

HDR is manual. It must be turned on – swipe left - and turned off by swiping left again and selecting auto. It will not work if flash is set to on, or auto. Pro mode is limited and there is no RAW option. Again, not as intuitive as the GS6/GS7.

The focus is a little slower – it uses a Samsung GH96-10461A CMOS sensor (not a BSI) and contrast detection system (not PADF). Still, it is acceptable.

All reference shots were set to Auto. Manual HDR was selected for second comparative shots.

Outdoors, early evening: Creditable shots, especially as I tested during a very overcast day with thin sunlight. HDR did enhance shadows and give better sky definition but at the expense of exposure time.

Selfies: Excellent potential with auto screen flash, but the lack of OIS and autofocus means take care to get better results.

AMOLED is the class leader and it uses a diamond pentile (RGBG - 1 x full-sized red and blue and two x half-sized green) for maximum brightness. In fact, side by side with the S7 Edge it is a tad whiter/brighter/cleaner but that could be the new Grace UX that we first briefly saw on the Note 7.

It has black blacks, infinite contrast, and good colour with a choice of cinema, photo, adaptive and basic modes as well as colour balance – as good as it gets for an HD screen.

Sunlight readability is a given for AMOLED and its adaptive mode is great for night use too. It has a blue light mode for night use.

The Exynos 7880 with eight x 1.9GHz cores is roughly equivalent to a Qualcomm Snapdragon 625. It is no powerhouse with performance coming in the midrange of similarly equipped phones.

Do you need the power? It is not aimed at game players but at those who want a great AMOLED screen, and up to two days’ battery life, and in everyday use there is no lag.

It has a fingerprint reader and a Web sign-in feature that remembers passwords that can be completed with a fingerprint – time-saving.

Samsung supply Knox as a way of securing and customising its Galaxy smartphones. This manifests as a secure folder (secure container or workspace) to encrypt and protect data, pictures, apps and more. Once you enter the secure folder and take a photo it goes there – not the gallery. Knox is not a substitute for paid anti-malware apps, but it is very good for privacy and app security.

I have started to use it for storing passwords and personally identifiable information – all secured with my fingerprint.

The Samsung phone app is one of the better ones that picks up caller ID from contacts, MS Outlook, the Telco and other contact managers. In tests around Sydney on the Telstra 4GX network, it was bit-for-bit the with the Galaxy S7 Edge – that is more of a measure of the network speed than the phone.

It has the Direct call feature to make and receive make a voice call by picking up and holding the device near your ear while viewing call, message, or contact details.

The ringtone was loud enough but it's mono, side-firing speaker was, at best, shrill. Hands-free was clear on both ends and the two active noise-cancelling mics (one top and bottom) did a great job. Calls were clear.

Ironically, there is a 7-band equaliser and UHQ up-scaler but it makes little difference to the tiny, tinny speaker.

Pure audio output is excellent. I hooked it up to a Pioneer AV amp and ramped up the volume to test if the audio input is up to scratch – it was. In Bluetooth tests using a Sennheiser PXC-550 headset (for my reference sound), it was excellent.

It will do VoLTE but there is no mention of Wi-Fi calling.

The A5/A7 has a 3000/3600mAH battery that powers an always-on-display except when it is in your pocket. The theoretical endurance test is 95 hours. I found that in heavy testing use (first couple of days) there was at least 60% left before bed time. It would stretch to two days of average use.

As an affordable flagship, it is not too far off the mark. As a midrange, it would score 4.5 out of 5 and as flagship 7 out 10 (maybe more with Android 7 and some camera tweaks).

If I could not afford the Galaxy S7, sure! Some 84% of the population purchase mid-range or lower cost handsets. But then I would look seriously at the Galaxy S6 that is selling from $499 to $699 (provided it is the genuine Australian model SM-G920IZKEXSA).

That is not to take away from the A5/A7 – there is a lot to recommend. IP68, battery life and AMOLED screen for starters. Perhaps I expected too much from the camera — after all a Galaxy class should have the best camera — but it is fine for average happy snaps.

Make sure you buy the 2017 Australian model – there are A5 and A7 grey imports and earlier models selling from around $400, and while they are decent phones, they are not a patch on this model. 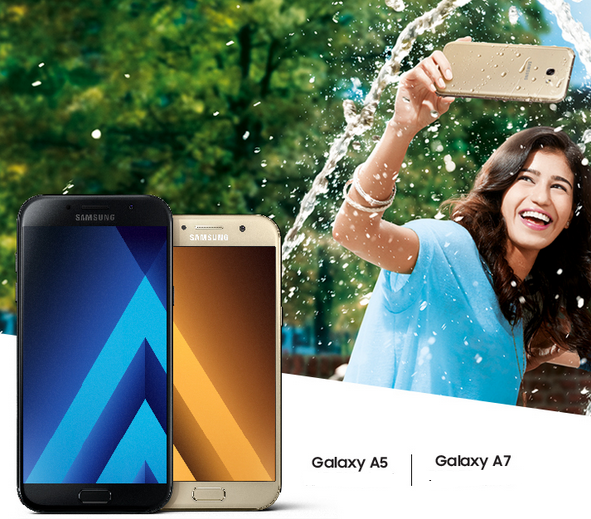 More in this category: « ZTE Axon 7 – budget buster packs everything including Dolby Atmos (review) Huawei Mate 9 delivers a whole lot of phone (review) »
BACK TO HOME PAGE
back to top