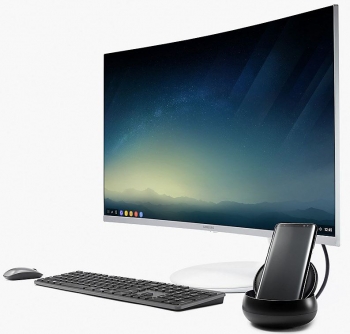 Samsung’s DeX allows a Galaxy S8/S8+ (and presumably a Note 8) to support many Android apps on a 16:9 screen and use a keyboard and mouse. It does this very well.

Reviewing DeX (Desktop Experience) is not as simple as reviewing say, a Windows 10 computer connected to an external screen. You must remember that DeX is a hardware dock for an Android device (presumably only Samsung devices) that allows you to connect a 16:9, 1920 x 1080p monitor, Ethernet connection (Wi-Fi is supported too), USB keyboard/mouse/dongle and USB-C power.

It is idiot proof – the first time you connect all the items together it will check for DeX software, update it, and access the screen – it is that easy.

All you get is the DeX dock and a quick start guide in 26 languages in a type font so small you need not read it. 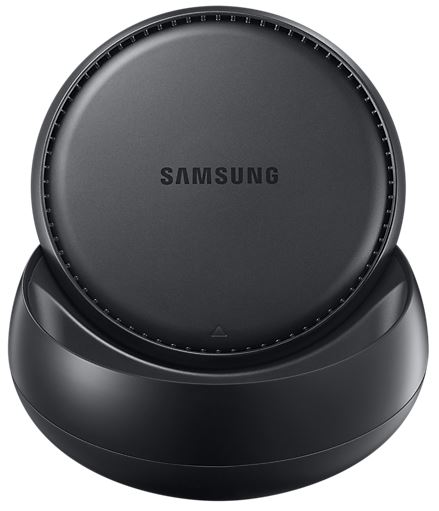 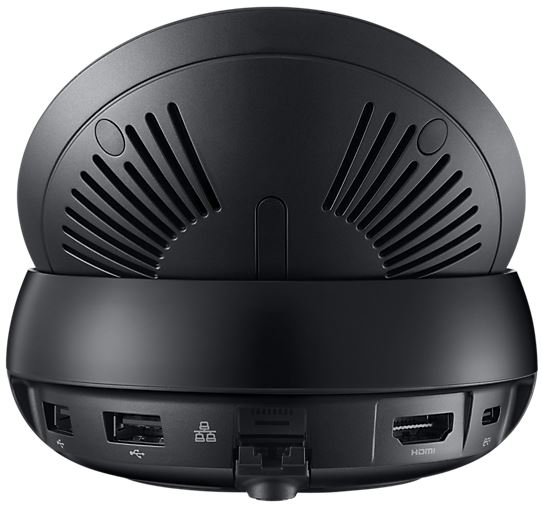 Note that most USB cables are not long enough to make it from the charger plugged into a wall power socket to the dock – buy a longer USB-A to USB-C cable or have a power board nearby.

You can connect a USB keyboard and mouse, or a Logitech USB receiver/dongle style of keyboard, or connect via Bluetooth as well. I tested all and each worked equally well. 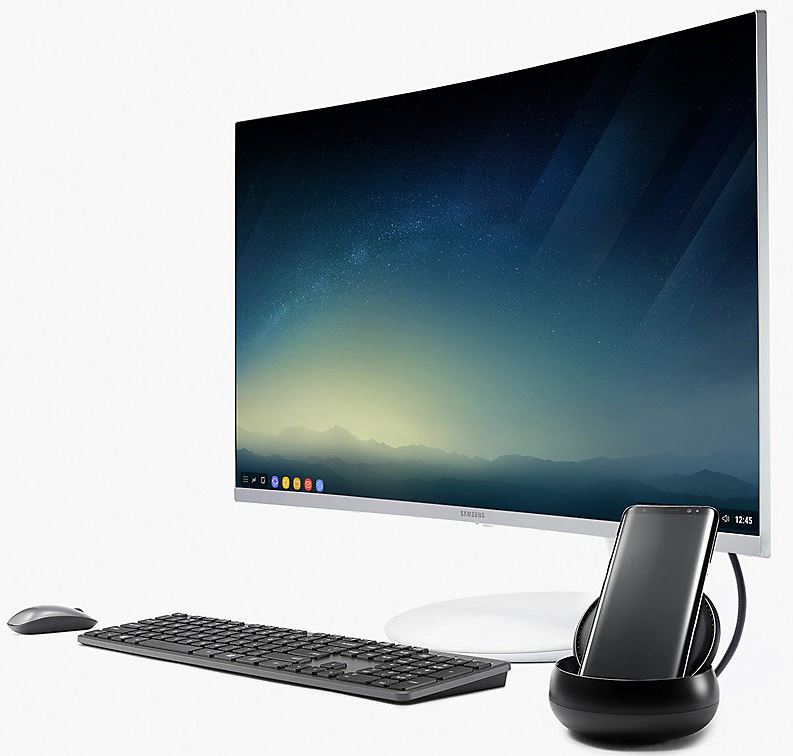 The test used a Samsung 27”, Quantum Dot monitor and it was perfect – crisp text and vivid colours. The choice of monitor is not critical, but it must at least support 1920 x 1080. I tried older HDMI Benq, Acer and ASUS monitors and text clarity suffered a little. It has something to do with the screen being optimised for PC or AV and once that was sorted in the screen set-ups, the text was more than acceptable.

It presents a menu bar along the bottom right of the screen that is more akin to the menu bar on the top of the handset allowing access to Android notifications. On the bottom left is a pop-up of apps installed on the S8.

Most will allow you to open and use a keyboard and mouse to navigate, click and execute. I could not find any that did not support a mouse and very few were not resizeable (that indicates poorly written apps that specify pixel width instead of percentage).

My only gripe here is that the Apps are listed alphabetically and cannot be rearranged as on the phone screen. To be useful, you need to drag a shortcut to the desktop or taskbar.

As you select an app, an icon appears in the lower left of “taskbar” and you can swap between these as you would ALT-Tab on a PC. Impressively, DeX allows for multiple resizeable windows to be open so you could have a Word document, email, images and many more etc., up to the memory space available and you can minimise these as well. I tried opening more than 20 apps at once with three on screen. There were no issues. 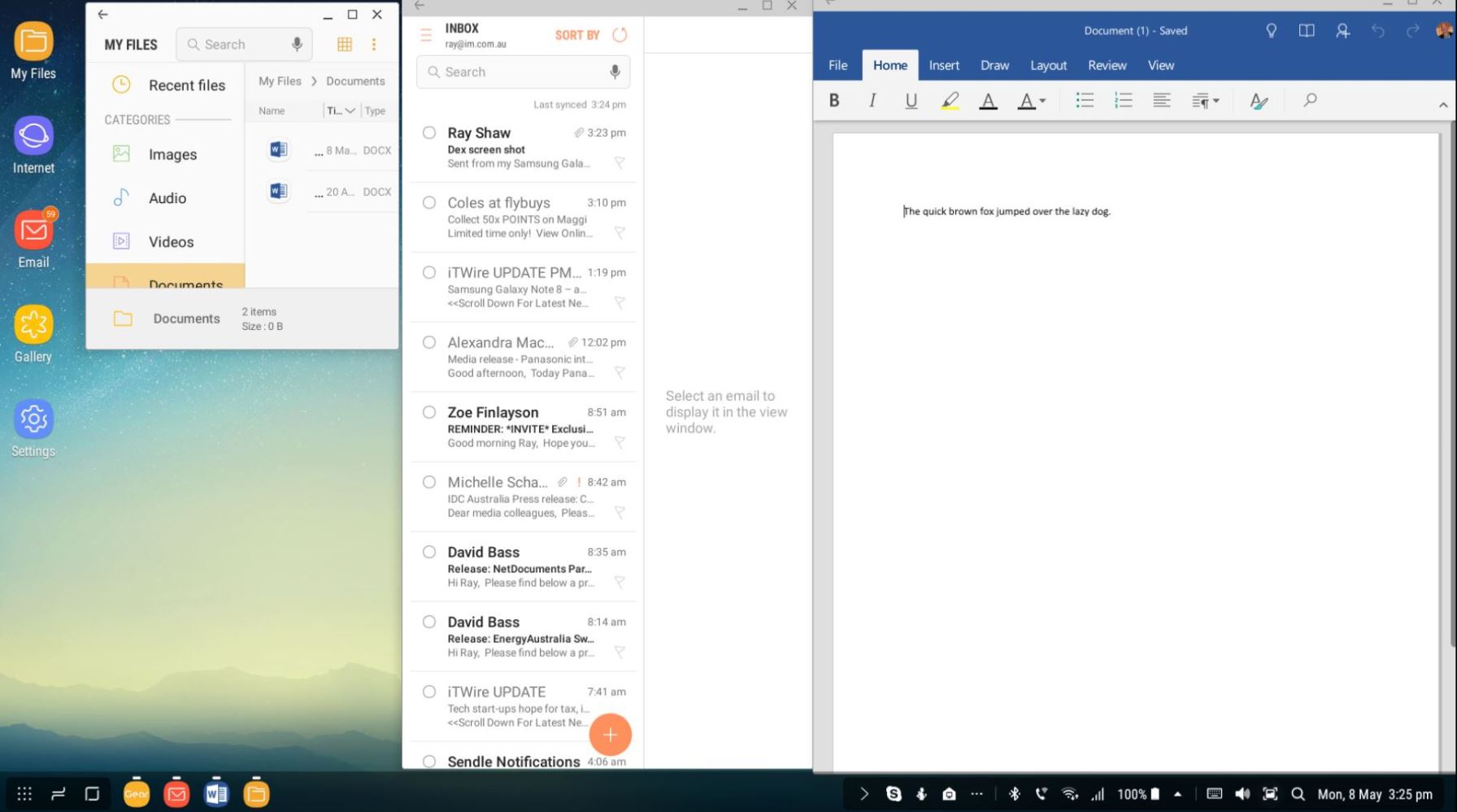 There was no lag, except when the phone rang it delayed a character.

Microsoft has optimised Office 365 (licence needed) apps including Word, PowerPoint, Excel, OneNote, Skype and Outlook for Dex. These are the tablet version of those apps but they can be resized and use Windows keyboard shortcuts.

While you may be used to the comprehensive “ribbon” screen on a PC, this is tablet icon driven. After using it for a few hours I managed to find all the icon shortcuts I needed.

Adobe has announced it will bring Photoshop and Lightroom to DeX.

It defaults to the cloud – in Office 365 it is OneDrive personal and in others it is their cloud. The idea is that you can pick up seamlessly from other devices. But you can save to the S8 memory too.

The next challenge was printing – something most Android smartphone users never really do. I have network connected HP and Canon printers and after selecting a photo from the gallery and pressing print it identified the printers, their IP addresses, asked to install HP Print or the Canon equivalent and printed.

One small snag was that tried to print from the manual paper feed (Tray 1) but that was solved by setting Tray 2 as default. In this regard, Continuum uses the Windows universal driver model out of the box, but once the appropriate print driver was installed DeX equals it.

You can plug in a USB flash drive or SSD (tested to 1TB) and all the files are accessible. You can also plug in a powered hub if you need more USB slots.

Surfing the Web was a breeze with the Samsung Internet Browser (Mozilla based) offering multiple tabs (I opened more than 30 at one time) and speed was great (I was using Wi-Fi).

I was impressed that its browser presented full desktop experiences – not mobile sites. Early international tests have stated that some sites simply don’t know what to do when they identify Samsung S8 as a mobile device. It does not support Flash content.

Chrome is not yet optimised and displayed mobile sites, but frequently locked up.

The Samsung email client worked well offering similar functionality to the phone app. So too did contacts and calendar (I hook the Samsung app into Office 365 mail, not that it makes any difference).

Everything you get on the phone will also show up on the screen – fleetingly in the bottom right corner and then in the pop-up notifications section.

At a predetermined time on no use, DeX locks the phone and monitor and it can be unlocked by iris, fingerprint or pin via the keyboard.

The basic difference between DeX and Microsoft Continuum is that former runs most, if not all well behaved, Android apps in resizeable windows whereas Continuum only runs Universal Windows Platform (UWP) apps – well behaved Win32 apps in full screen. From that perspective, DeX eats Continuum.

I did not have the ability to test the new Citrix, VMWare and Amazon versions of the virtualised Windows 10 desktop and apps. I did see it on HP’s x3 and I see no reason why these virtualised environments would behave any differently. It is cool to see a full Windows 10 desktop running off an Android handset – if you are into that kind of thing. I understand RDP support is avaialable as well.

After a few hours' use

A proper review takes time – usually over a week or more and this exploratory run was over a few hours. I am impressed but I need to remind myself that it is Android, not Windows 10, that you are using.

Still, it is very impressive and may be very useful for the right user. DeX shows a lot of promise and Samsung’s volume of handsets may be the key to getting widespread adoption.

Its Microsoft Office support is brilliant – but I don't know the extent of other support for other apps.

In earlier articles, I mentioned that you can use Screencasting (Miracast) and a Bluetooth keyboard/trackpad, but that only provides the Samsung S8 screen (in portrait or landscape), and no keyboard shortcuts etc.

I also don’t know why the S8 screen is blacked out – it may have been nice to see the phone screen at the same time or use it like a mouse. I suspect that is in order to avoid too much stress on the USB-C connector. Having said that the dock will accommodate the third-party cases I tried.

At $199 it is not a wallet breaker and even if you use it as a dock just to play media or movies or as a lightweight PC then that it is not bad value.

I think DeX is a game changer for pocket computing and I hope it encourages other to do the same.

More in this category: « OPPO A57 half the price for twice the features (first look) Huawei P10 and P10 Plus – the next evolution (first look) »
BACK TO HOME PAGE
back to top