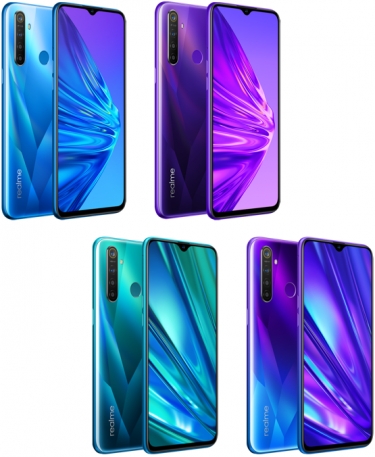 Following the original announcement of the release of 4 new realme smartphones, the realme 5 ($299) and realme 5 Pro ($399) versions were reviewed.

Rather than immediately dive into all manner of features and statistics, I instead dropped each of the phones into the eager hands of a 17-year-old, who used them for a week or two each.

Here are the (relatively) unbiased opinions.

He noted that both units felt good in the hand, and he was thankful for the clear soft plastic bumper case that came with each of them.

He also observed that although the realme 5 was physically larger than the realme 5 Pro and had a larger screen, the resolution was noticeably poorer than the 5 Pro (please, from now on, we will simply refer to them as the '5' and the 'Pro').

Both the 5 and Pro sometimes showed a reluctance to detect touches when operating close to the sides of the display - this may be an annoyance when playing many of the full-screen games available for any Android device.

The general opinion was that the cameras in both phones both felt great to use and both offered easy-to-use and effective editing tools - in particular, the auto edit feature allowed photos to look much better in just 1 press. "The additional offering of a wide angle and macro lens was really helpful as well."

Although the Pro's camera was 48Mpx compared to 12Mpx in the 5, the overall impression was that the difference wasn't as great as the pixel difference suggested. Obviously, the greater the number of pixels, the easier it is to retain a high-resolution cropped version of any image.

The notch was barely noticeable on either phones (it's the cut-out from the screen for the front facing camera, allowing the screen to extend closer to the physical edge of the device).

Both the fingerprint and face reader security access tools were extremely accurate and quick, "in the time it take for me to grab my phone from my pocket with my finger on the sensor I'm already logged in." However, he smaller fingerprint reader on the Pro can make it feel uncomfortable to use for larger fingers.

The side buttons felt very "clicky," and were not considered to be "mushy" at all.

The pop-out SIM drawer had space for two SIMs (permitting dual-SIM operation) along with a slot for a micro-SD card up to 256GB capacity. The dual-SIM option is very rare in a phone at this price-point.

One minor annoyance, neither phone was able to detect the magnetic button in a Google cardboard VR headset. For those not familiar, the vast majority of smartphones have a magnetic field detector to determine that they have been mounted in a cardboard VR cradle. Neither phone worked even though a magnetic sensor is supposed to be present in both phones.

The realme 5 has been available for sale since 25 October for $299. Specifications are as follows:

The realme 5 Pro has been available since 30 October for $399. Features:

Both phones use the same OS: OPPO's Color OS 6, based on Android P Hyper Boost 2.0

More in this category: « Review: OPPO's 5G phone is great, but it's tough to find 5G in Melbourne
back to top