Review: OPPO A94 5G is the big brother of budget 5G phones 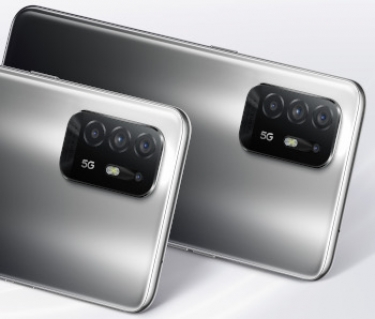 The rear camera on the OPPO A94 5G. Supplied

The OPPO A94 5G is the third low-budget model from this Chinese vendor released this year, and also the most expensive of the lot, the others being the A54 5G and A74 5G.

But then this is a marketing strategy to ensure that if someone is fixated on buying an OPPO 5G, then they will pick up one of the three, using their own reasoning to convince themselves that they have got the best of the bunch.

No matter what they pick up, the cash registers at the same parent company — B.B.K. Electronics, which also owns vivo and OnePlus, and has an interest in realme — will ring when the purchase is made.

The A94 5G is, like all its compatriots, a black brick, weighing in at 173 grammes, and thus is quite light in the hand. It is slim, being 8mm thick and fits quite well into one's hand. You'll find the words "acceptable" and adquate a few times within this review and that's what the A94 is: adequate and acceptable for the price.

Unlike some earlier models — I have been using the A91, a 4G model, since May 2020 — the volume buttons on the left are encased in a single sleeve, though they are separate on the phone itself. Personally, I would have preferred if they were separate in the sleeve as well. 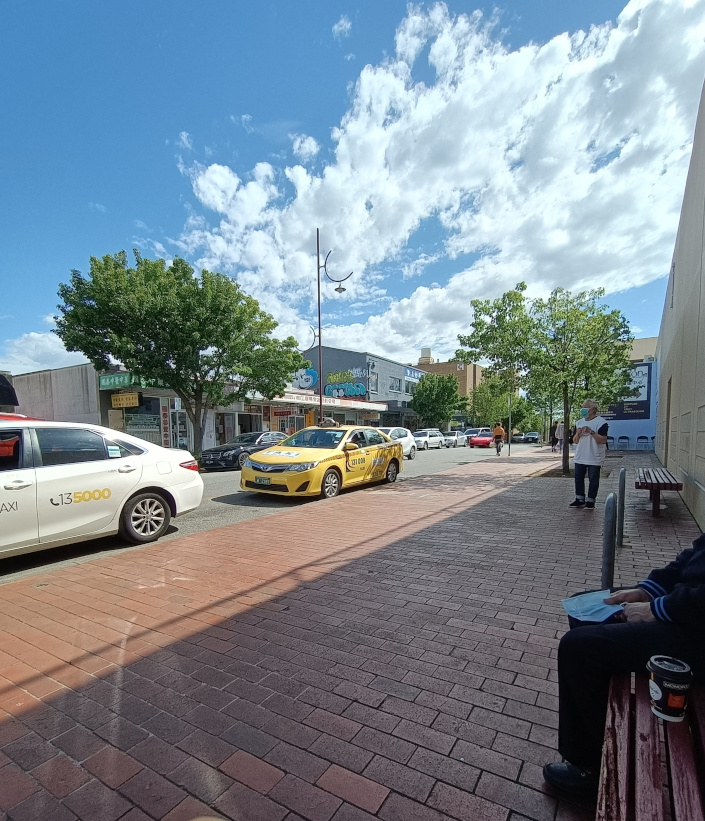 The A94 takes clear, detailed pictures in daylight conditions.

The rear cameras make a noticeable bump, sitting well above the case that comes along with the device. Within that bump are 48MP f/1.7 main, 8MP f/2.2 ultra-wide, 2MP f/2.4 macro and 2MP f/2.4 depth-sensing cameras. In the front, there’s a 16MP f/2.4 camera. This setup is the same as its two cousins.

The pictures are good, especially those taken in daylight. Those taken at night are acceptable, but in saying that one has said it all.

One point of difference between the A94 5G and the other two models is that the A94 has only the bog standard refresh rate of 60Hz. The other two offer the option of 90Hz as well and this is one area in which some may pick them, rather than the A94.

But when you look at storage and memory, the A94 scores, with 128GB of storage space and 8GB of LPDDR4X RAM.

Gaming is a bit of a drag at 60Hz. Supplied

The battery is adequate at 4310mAh and took 46 minutes to charge from 5% to 100%. As the phone can support 5G, perhaps the battery should have been a bit bigger; when one is connected to 5G, the battery does tend to run down pretty soon. The supplied charger supports 30W charging, which is kind of mid-range.

The AMOLED display is bright and clean with a screen ratio of 90.8%. Scrolling is smooth, though, as with many Mitek processors, there is the occasional stutter.

And one thing that was noticeable is that the connection, be it Wi-Fi, Bluetooth or mobile, occasionally tends to drop out. And one bug that still remains in the messaging setup is that the occasional text tends to come in rather late.

The A94 runs ColorOS 11 laid over Android 11. It does not come with a whole load of crapware like some other brands. 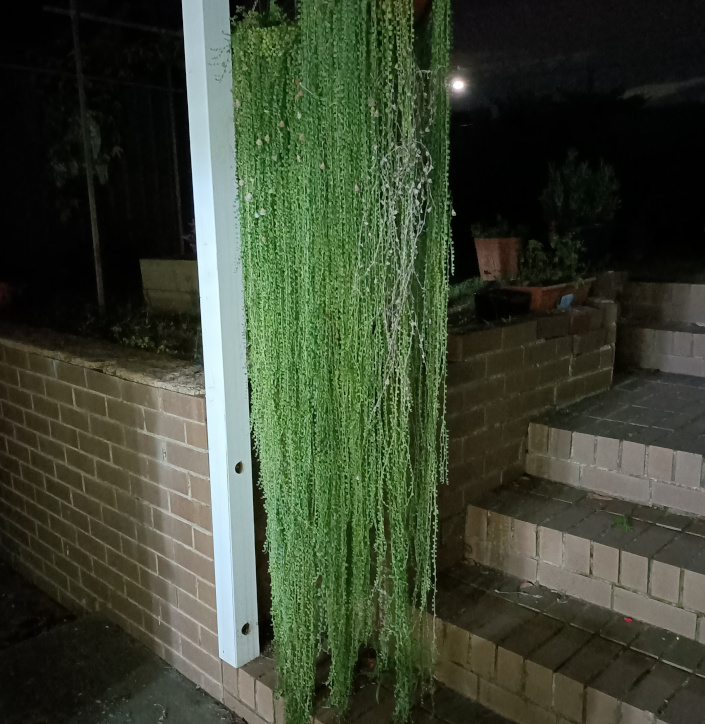 Pictures taken at night are acceptable.

The device is built on a MediaTek Dimensity 800U which promises to provide 5G that's always on. In practice, there is the occasional drop out. There is a single SIM slot and an SD-card slot as well.

Given that this SoC can support refresh rates of up to 120Hz, it is somewhat surprising that the device is restricted to 60Hz.

The sound is surprisingly good when one uses the supplied headphones.

One downside of the device in Australia is that it is tied to the Telstra network. The 5G offered by Australia's biggest telco is erratic to say the least and also quite expensive, with the cheapest plan offering only 80GB a month for $65.

But then if one has no objection to being tied to this provider, then the A94 can be bought here outright or on a plan that runs from one year to three. 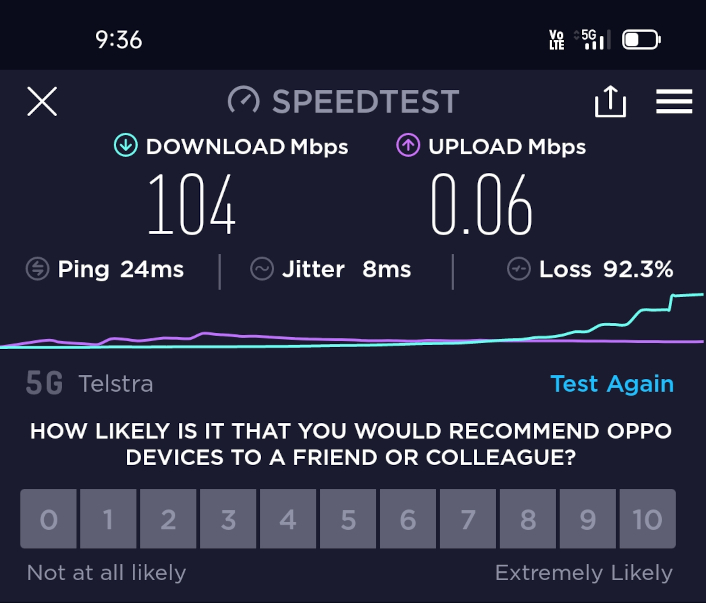 Yes, this is 5G, courtesy Telstra.

Personally, I would opt for a 4G plan and wait until there are really good reasons to go in for 5G. Australia has a more than adequate 4G network and the speeds are pretty good for the moment.

The other two 5G networks that are being built, Vodafone and TPG, will, hopefully increase the competition and bring down prices. At the moment, all four providers - Optus is the fourth - appear to have plans that are around the same cost. 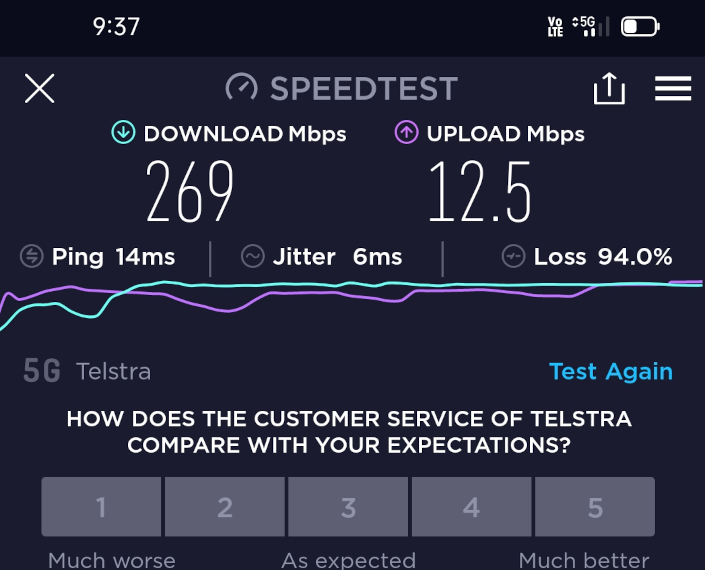 A moment after the reading taken above, the speed seems to have doubled. Again, Telstra. 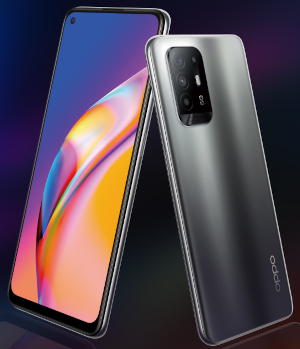 More in this category: « Review: vivo Y52 5G joins the mob jostling for sales in Australia Review: the time is just right for the OPPO A16s to emerge »
Share News tips for the iTWire Journalists? Your tip will be anonymous