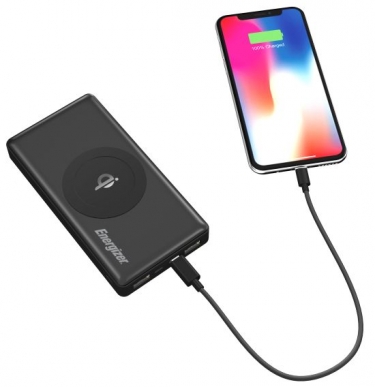 What's in the box?

The device, a short Micro-USB cable (data and power) and a simple user guide. 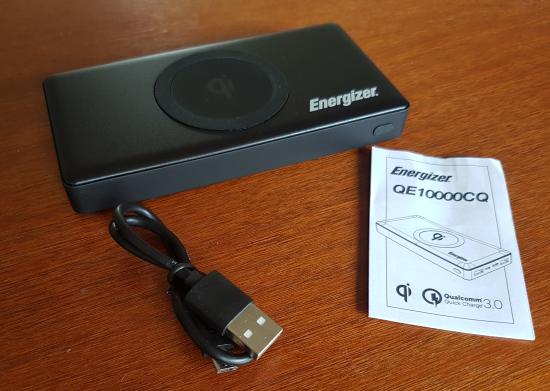 Specifications (according to the company)

Ports and other connections

There are four ports at one end of the QE10000CQ. From left to right…

Quick Charge 3.0: Being a Qualcomm Quick Charge 3.0 port, this will fast-charge Android devices. This port is coloured 'apricot' (everything else on the device is black).

Micro USB IN: This port is used only to charge the power bank (probably using the provided cable, although any cable will work).

USB-C IN/OUT: Typically used to fast charge an Apple device. This is also a PD port. In addition, for users who have only Apple-style cables and power packs, this port will be used to charge the power bank.

USB OUT: This is the general-purpose charging port for any 'less intelligent' device that cannot use (or negotiate) fast charging. However, it is still capable of delivering 5V / 2.4A, which is effectively 'fast' charging in many cases.

In addition, there is the Wireless fast charge pad on the top of the pack. There is a small power button which must be pressed in order to activate the wireless pad (we didn't see this for a moment - we should have noted the instruction in the small instruction sheet!).

Finally, there is a small row of LEDs on the side opposite the power button which indicate the state of the device. Press the power button to activate them. Four white lights indicate a fully charged device, flashing lights indicate the power bank is being charged. A blue light at one end shows that the wireless port is enabled. A power-down will occur if not used within about 30 seconds. Note that this ONLY applies to the wireless system. As a simple battery, it is always available, whether turned on or not.

The main sides of the device are metal with a rubber 'skirt' wrapped around to hold everything together. There was no obvious way to open it and we made no attempt to do so. The power back appears robust and likely to handle the knocks and bumps it would experience with a frequent traveller.

Thoughts on usage and performance

Only one 'fast' port may be used at any one time. If a fast wireless charge is in use, plugging another device into the quick charge port will temporarily disable the wireless port while some kind of reset occurs. After a few seconds, 'slow' wireless charging resumes. After removing the cable, it takes ten or more seconds for the fast mode to resume on the wireless connection.

Similarly, if devices are connected to the Quick Charge and the USB-C ports, all will run 'slow.' However, the system will support three devices charging concurrently (none 'fast' of course), although there is a warning sticker across the ports indicating that no more than two devices should be charged concurrently - with a quick test, we were able to connect three, although we didn't do any more than confirm all three were receiving power. Obviously, the sticker must be removed prior to using the unit.

[edit] The power pack's web page clearly states that using more than two devices will cause the power pack to be disabled.  If this occurs, remove all devices and recharge the power pack to reset it.  We did not see this during testing, but as stated previously, the 3-device test was only for a few seconds. [/edit] 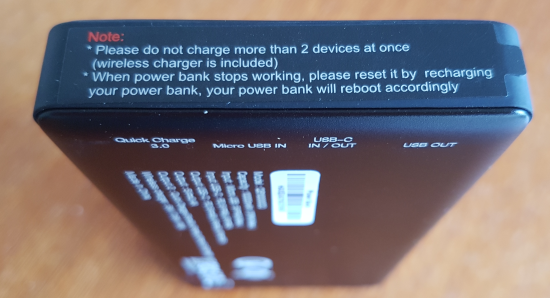 The QE10000CQ is a mouthful of a name, but the device itself efficiently does what is expected of it.

Like any power pack, it is immediately available for charging via a cable, but must be turned on to activate the wireless charging feature.

Based on a casual search of competing devices, the QE10000CQ appears to be only one with all of the features described in this review. There are units with higher capacity, but no wireless, there are units supporting wireless, but no quick charge port, etc.

For users needing the flexibility this device offers, it would be an excellent choice, and in fact even if someone has only Apple or only Android in their possession, they are sure to have a 'friend' with the opposite who needs a charge. Urgently!

We performed a simple search and noted multiple Australian suppliers offering the QE10000CQ for between $60 and $70. All appear to have stock at the time of writing.

More in this category: « OPPO A91: premium features mean it is in a class of its own Review: Gamer? Then the realme 6 may be a good sub-$500 choice »
BACK TO HOME PAGE
back to top