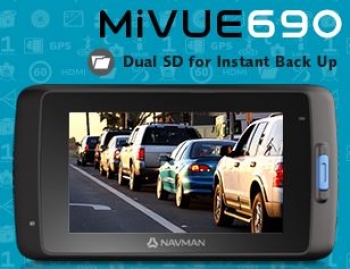 Dashcams are the next hot item in car safety. Although not legally admissible evidence in court – yet – it can be the difference between being blamed or exonerated in an accident, or fighting a speeding ticket.

What better way to road test a dash camera than a trip up the Hunter Valley? Navman provided the A$329 MiVUE 690 SAFE – the top of the range 2K HD dash cam with some very nice extras like GPS, ADAS safety features, two microSD slots, safety camera alerts, and over speed warnings.

It’s bigger brother, the MiVUE 698 DUAL CAM adds a second rear facing camera (mounted on the rear glass) but in most other respects it is the same. There is a scaled back version with 2K record, but no ADAS called the MiVUE 680.

So, we set off on a 400km round trip traversing the suburban nightmare of Sydney’s old Pacific Highway then the M1 to Cessnock – plus a bit of interesting scenery along the way.

The box contains the unit, a windscreen suction vehicle mount, a mini-USB to cigarette lighter charger, and some 3M cable mounting pads.

I mounted it mid-windscreen beside the GPS unit and found that the bottom third of the image was just the dashboard. You need to mount it high enough to get a clear front view – no big issue but it is best just under the rear vision mirror. The wide-angle lens does not overly distort the edges of the image.

Video use and memory storage

It does not come with a microSD card – you need to buy two (for this model), and I suggest that you buy as large as you can afford. It supports up to 128GB per slot and can be found for as low as A$60 each.

It auto starts and stops. It can do continuous loop record or in one, three or five-minute clips.

Every “event” typically creates a 20-second 35-40MB file. Events are things like lane changes, being too close to the car in front, front car departure, swerving, braking hard, parking, over speed, etc. It is all very useful.

It also creates a video, typically in 3 to 5 minute, 300-500MB files. The result is a severe use of storage. Once it is full, it can overwrite the oldest files. The second SD is for manual event backup – it won’t overwrite events.

The unit uses a three-axis G-sensor, so in effect, ADAS is related to what it measures – up/down, left/right, forward/reverse.

It also uses the camera lens to check the approximate distance to the car in front or headlights left on etc.

It has a driver fatigue alert timer.

The 2K, 2304 x 1296, lens produces clear images, well beyond what I have seen in other dash cams. You can read number plates on surrounding cars.

It is very good in daylight and lower light, say a parking station with fluorescent lights but it is not great at night. When I say that please consider that most roads are reasonably well lit and you have headlights – but on dark country roads, there is not a lot of detail.

Any footage taken is timestamped and has GPS coordinates. You can trigger manual recordings or still photos. It has a parking mode to record front parking incidents.

While the manual says, you can review images on a Windows or Mac computer using MiVue Manager the software does not yet support the new 6XX series.

You can do almost everything on the 2.7” screen – it is not touch and relies on four buttons on the side. Out of the box, you should not have to calibrate or change any settings, but if so you will need someone else in the car to do it while you concentrate on driving.

There will come a time when dashcams are mandatory – at present, the technology has advanced enough to be a good idea.

I am going to rate it seven out of ten – the 6xx series are a great improvement over the 5xx series, and the 2K image is the best of any Navman MiVUE I have seen, but I think the technology has a way to go to make it mandatory.

My parting advice – don’t buy a cheap dashcam and consider the MiVUE 6xx series the benchmark.

More in this category: « Google Pixel XL - good but it could be great (review) Sony is tantalisingly close to right – Xperia XZ (review) »
Share News tips for the iTWire Journalists? Your tip will be anonymous