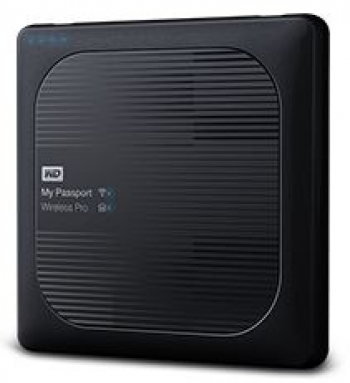 WD’s latest My Passport Wireless Pro external hard disk can cut the cable. It allows you to use either USB 3.0, or Wi-Fi AC, or plug in an SD card, or attach an OTG device. It runs on battery for much of the day, and you can even use it as a power bank.

Its main use is as a portable media server and back-up device when on the road. For example; the Plex media server can (in theory) stream 720p/HD content to four/two Wi-Fi connected devices, and it can back up from Wi-Fi-equipped cameras, smartphones, tablets, etc.

The My Passport Wireless Pro comes in 2TB or 3TB for $389/$449 and like most things from WD it is easy to set up and pretty bulletproof in operation. It supports Windows, macOS and has an inbuilt DLNA/UPnP/Townky or download the free Plex for media streaming.

Summary: Does what it promises, good battery life, and reasonable data transfer rates. Read on for the review.

The My Passport Wireless Pro is reminiscent of an old external CD/DVD player and just as simple to use. You charge it via USB-A to Micro B USB-3 cable (this has two segments comprising a standard micro-USB for power and an add-on for data). It has four LEDs to denote power (in 25% increments) and two more to denote Wi-Fi and hard disk activity.

Download WD My Cloud app (iOS, Android, Window or macOS) and then join the 2.4 or 5GHz SSID that it transmits. The software is well laid out and functional.

You can set up a wireless bridge to your normal Wi-Fi network, so you don’t lose Internet connectivity. The My Passport Wireless Pro can act as an access point for up to eight Wi-Fi devices.

You need to know that as a bridge it is retransmitting your Internet signal – whereas I usually get over 100Mbps, it gave me about 60MBps. That’s not a big issue unless you are downloading files.

On the 5GHz Wi-Fi SSID in tests with a 229MB file, it both copied to and from my Surface Book at 20MBps – about 10 seconds. Using the 2.4GHz connections, it was much slower – around 2-5MBps.

As direct attached storage (via USB 3.0) it achieves around 100MBps download and 80MBps upload.

You can connect an OTG compatible device — like an Android smartphone or tablet — using its USB2.0 port. It got 30-50MBps download – upload speeds are poor on any OTG device.

Transfer of data to an SD Card took place at about 50-60MBps download and 20-30MBPs upload.

The My Passport Wireless Pro is not quite there yet. Using one 5GHz Wi-Fi tablet was fine – it streamed HD MP4 movies easily. With two devices it spluttered a little too often. My conclusion is that a) you need a 5GHz device/connection and b) a 720p playback is all you can reasonably expect from two concurrent devices. That is a generalisation as it may depend on what devices you use.

It has a 6400mAH battery for a claimed 10 hours. I conducted two tests. In streaming movies to two devices, it lasted for just under 7 hours. As a Wi-Fi bridge and using it as a hard disk, I got a little more than nine hours.

Recharge time using a USB 3.0 x 1A feed from a SurfaceBook was more than six hours. The 2.4A charger did it in about three hours.

As a power bank, I recharged a 3000mAh smartphone in three hours so it will deliver 1A from the socket but that halved the remaing battery life.

More in this category: « OPPO F1s – a good all-round phablet (review) Fitbit Surge – fitness tracker with GPS (review) »
Share News tips for the iTWire Journalists? Your tip will be anonymous