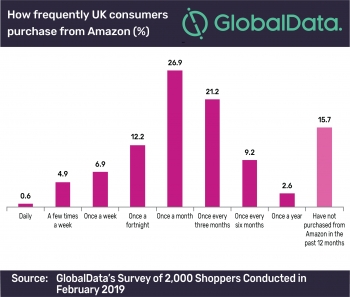 Shoppers in the UK purchase from Amazon at least once a month, according to one global analyst firm which says that Amazon continued to steal share from competitors across the board in 2018 and remains a major threat in all retail sectors.

According to analyst GlobalData, Amazon’s FY2018 results show the online behemoth is not slowing down, with UK revenue rising 23.3% against strong comparatives.

And GlobalData estimates Amazon’s share of UK retail spend — including third-party sales — increased by 0.7 percentage points to reach 4.9% in 2018, with rapid growth forecast over the next five years and the retailer set to account for 8% of spend by 2023.

“Amazon’s enviable order frequency figures, alongside its admirable UK revenue growth in 2018, are evidence of how the online giant is gradually ingraining its ecosystem into the lives of UK consumers – 84.3% of UK shoppers have purchased from Amazon in the past 12 months with almost a quarter of these consumers purchasing more frequently than a year ago,” GlobalData says.

“Amazon’s Prime delivery saver scheme locks in loyalty and has bolstered growth in recent years, but despite being renowned it still presents an opportunity for the retailer with 38.1% of Amazon shoppers currently signed up; therefore there are many more potential subscribers,” said Sofie Wilmott, senior retail analyst at GlobalData.

“Although other retailers — primarily online pureplays — have implemented delivery saver schemes; few match up to Amazon’s well-rounded offer with the bonus of a high-quality entertainment service and its broad product range, making signing up to its delivery scheme more worthwhile.

“At a time when there is little growth in the UK retail market as consumer confidence remains low, hindered by economic uncertainty, Amazon has continued to far outperform and as it sets its sights on growth in sectors it has previously not prioritised, retailers of all kinds are under threat. In order to compete with the online leader.

"UK retailers must focus on their unique selling points whether that might be product specialisms or excellent customer service, and additionally consider if they can work with Amazon to piggyback on its growth, namely selling products via its site."