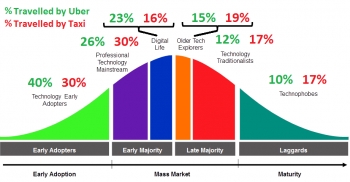 According to research undertaken by Roy Morgan, over 4.4 million Australians (21.5% of the population) are now using Uber in an average three months since launching here over six years ago.

Roy Morgan says Uber is “now within touching distance” of the almost 4.5 million Australians (21.7%) that use taxis in an average three months.

“Uber has really taken off over the last three years as the service has established itself in Australia’s main population centres. Patronage of Uber has grown from 6.6% in mid-2016 to 21.5% now, an increase of 14.9ppts in under three years,” Roy Morgan notes.

According to Roy Morgan, during the same time period fewer Australians are using taxis “but the decline has been far gentler” down from 24.4% in mid-2016 to 21.7% now, a drop of only 2.7ppts.

Roy Morgan chief executive Michele Levine says Uber has been a “phenomenal success story in Australia with the ride-sharing app now on the verge of overtaking taxis as Australians’ preferred mode of private transportation service”.

“Now 21.5% of Australians travel by Uber in an average three months an increase of 14.9ppts in under three years and on the verge of overtaking taxis used by 21.7% of Australians.

“Uber is also used at a more frequent rate by those who use the service. Uber customers take an average of over 4.1 trips in an average three months compared to fewer than 3.8 trips taken by Australians who use taxis.

“As we’ve previously explored, Uber is more popular with certain age groups and in certain areas of Australia. Earlier this year we noted that Uber had already overtaken taxis in three Australian States including Victoria, Queensland and Western Australia and today’s research reveals that it is the ‘Early Adopters’ that have really driven uptake of the ride-sharing app.”

According to Roy Morgan, unsurprisingly Uber has been a big hit for “Technology Early Adopters” with 40% travelling by Uber in an average three months compared to 30% that have travelled by taxi.

And Roy Morgan says the research shows that those in the “Digital Life” segment are also more likely to have travelled by Uber (23%) than by taxi (16%).

However taxis (30%) still hold a marginal advantage amongst the “Professional Technology Mainstream” ahead of Uber (26%), Roy Morgan says.

“Taxis are also the preferred personal transportation vehicle of choice for the ‘Laggards’ known as “Technophobes”, and nearly twice as many “Technophobes” travel by taxis (17%) than travel by Uber (10%), the report says.