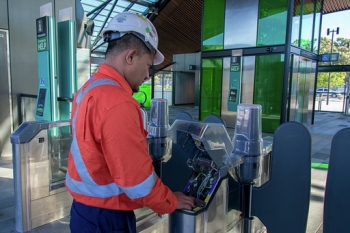 Advanced ticketing technology to cater for driverless trains has been installed on Sydney’s metro train system which opens on 26 May.

Cubic says operators in the Metro’s Operations Control Centre will use “eyes on” technology to open and close individual gates to speed up commuter flow during peak periods.

Tom Walker, CTS senior vice-president and managing director, Asia-Pacific, said, “We need to ensure customers get on board as quickly and conveniently as possible.”

“This is a global issue. As train passenger numbers increase in major cities, one of the dilemmas is how to get more commuters through stations more quickly, without just adding more gates.”

Walker said Cubic’s engineers have “cracked the puzzle” by using remote monitoring to get more use out of existing hardware.

“When the Sydney Metro opens for business, it will be one of the most modern automated passenger train networks in the world. Cubic is honoured to have been involved in this landmark project,” he added.

Walker said the launch of the Metro marks the culmination of a year’s hard work by a team of Cubic engineers in Sydney and Perth who installed the RSDM system and the London-style ticketing gates, featuring a flat floor design for easy access with prams and wheelchairs, and new paddle-style gates to deter fare evasion.

More in this category: « NZ businesses have less than 2 years before digital disruption hits: report ‘Network nasties’ number one frustration for Australian IT managers: survey »
back to top