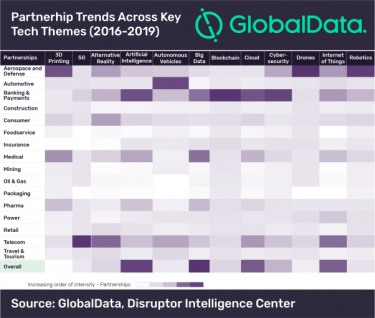 The advent of new technologies is rapidly disrupting the value chain of all sectors, and companies are increasingly forming partnerships with start-ups to better serve their customers, according to one global research and analyst firm.

Against this backdrop, the banking and payments sector led the disruptive tech partnership landscape between 2016 and 2019, according to analyst firm GlobalData, which also says that driven by artificial intelligence (AI), banking and payments edged past other sectors in terms of the usage of technologies across various themes.

Manish Dixit, Disruptive Tech Analyst at GlobalData, says: “With technology disrupting the traditional business models, it has become imperative for businesses to partner with technology innovators to stay relevant.”

GlobalData says an analysis of its Disruptor Database reveals that among the various tech themes, big data, AI, cloud, Internet of Things (IoT) and cybersecurity were the most prominent across sectors, while partnership activity across 3D printing, drones, and autonomous vehicles remains low, largely because they are relevant only to the sectors where there is a unique application.

According to GlobalData, interestingly, several companies across the sectors are forging tech partnerships to address some of their long-standing issues.

However, the scale and pace of digital transformation underway in the banking and payments sector indicates it will outpace virtually all other sectors in terms of technology partnerships.

“The single most important criterion when selecting vendor partners is industry expertise. This is a testament to the unique regulatory environment of the sector and the need for partners that truly understand the risks and opportunities that present,” Dixit added.

Similarly, Visa has partnered with Canadian conversational banking technology provider Finn AI to serve the needs of digital banking customers with a virtual assistant - and Novartis and Microsoft have recently partnered to leverage data and AI to transform how medicines are discovered, developed and commercialised.

And in other examples GlobalData says that:

“Each of these initiatives demonstrates the underlying fact that partnerships are necessary for enterprises as they are under tremendous pressure not only to gain competitive advantage but also to sustain,” Dixit concludes.

More in this category: « Independent Reserve launches AutoTrader cryptocurrency trading platform Blockchain cross-border payments surging to US$4.4 trillion by 2024 »
back to top