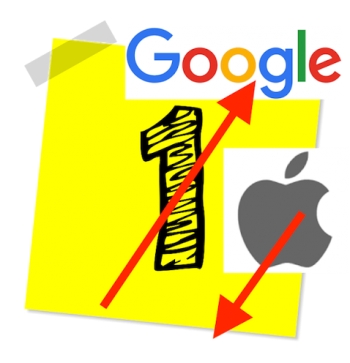 Apple has been shunted to second behind Google in the rankings for the top 100 most valuable brands in the world this year released on Wednesday by WPP and Milward Brown.

The two giants of the Internet and technology world swapped positions. Google jumped back to the number 1 spot from 2nd last year with a brand value for 2016 of US$229.1 billion while Apple — number 1 in 2015 — relinquished its position to Google, with a drop in brand value to US$228.4 billion.

Google’s climb back to the top of the rankings represented an increase of 32% in brand value — its best ever — with Apple down by 8%.

By contrast, Cheung says Apple tends to follow a trend of bi-annual surges of innovation along with keeping this pipeline secret. “This, combined with the lost momentum in sales for the Apple Watch as well as the lack of a new market-defining handset, is reflected in the 2016 valuation for last year’s no.1.”

These latest brand value rankings for this year reveal that for the second consecutive year, Facebook was the technology brand that rose the fastest in the BrandZ Top 100, growing 44% to US$102.6 billion, a value that Cheung says pushed the social network into the top 10 for the first time.

“This was thanks to adding new features such as Friends’ Day, Disaster Alert and live video broadcast to its community platform, as well as attracting new publisher content. It is also proving highly successfully in monetising the move to mobile, attracting significant spend via its mobile ad platforms.”

But, on a not so positive note, overall it’s been a less than triumphant year for the tech sector.

According to Cheung, as a rule, hardware companies have performed less well with new areas such as wearables, watches and the Internet of Things (IoT) yet to deliver either financial or brand benefits.

But, one company that Cheung notes has defied the hardware-service divide is Huawei, the “low-cost smartphone manufacturer”, which first entered the tech Top 20 last year. It has shown 22% growth to US$18.7 billion following its emergence as the leading Chinese smartphone maker in China, and becoming a key rival for Apple in the rest of the world.

Another success story revealed in the report, that Cheung says is indicative of future trends, is streaming TV service Netflix, which has been listed in the tech Top 20 for the first time with a brand value of US$9.2 billion.

Cheung also stresses that the consumer perception that the B2B brands are less innovative — “even if that isn’t always the case” — has seen the proportion of total value in the technology Top 20 that is contributed by B2B brands decline from 56% in 2006 to just 26% in this year’s listing.

“There is a clear imperative for tech brands to showcase their innovation pipeline both in order to convince consumers that they are working hard to change their consumers’ lives but also to allow investors to anticipate future growth more accurately. With complex supply chains, secrecy is no longer possible and Google has benefitted from its corporate restructure which allows it to better showcase the innovations beyond its core search business,” Cheung said.

More in this category: « AEEMA aims to build ICT bridges with Japan Wyse drives thin clients to fat year »
Share News tips for the iTWire Journalists? Your tip will be anonymous