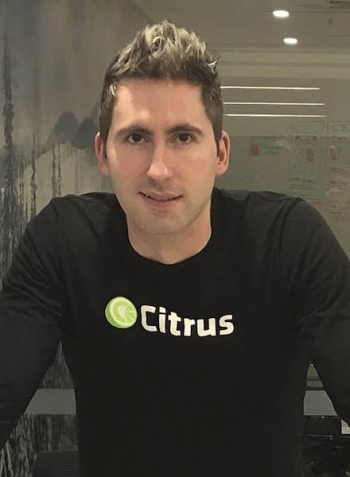 According to Citrus chief executive and founder Brad Moran — an ex-AFL footballer with North Melbourne and the Adelaide Crows — Citrus has signed up some of Australia’s largest online retailers in groceries, homeware, electronics and pharmaceuticals, such as Dan Murphy's.

Citrus provides online retailers and their suppliers with a digital advertising tool which it says is similar in nature to Amazon’s advertising network that increases product sales from websites, while retaining advertising revenues within the Australian retail ecosystem, rather than losing it offshore.

Moran says Citrus is also launching with global retailers based in the US, UK, Europe and Latin America, through its offices in those regions, and has completed two rounds of financing – most recently in February this year, based on a valuation of $35 million.

According to Citrus, one national retailer has reported that since it started using the Citrus system earlier this year, brands on its website have received an average 1000% return on their ad spend and, in some cases, as much as 19,000%.

“This year we’ve launched with some of the world’s leading retailers in Australia and overseas,” he said.

“Citrus provides retailers with the technology to bring into their business a share of the huge digital advertising and global search dollars largely monopolised by the likes of Amazon’s Ad Network, Google and Facebook.

“The platform is delivering well above digital advertising industry return-on-ad-spend averages. One brand generated more than $1 million in retail sales in six weeks after a $30,000 investment in Citrus.

“We deliver these results by placing the ads at the point of purchase after running products through our real-time relevancy engine, a unique algorithm that uses individual relevancy factors to score them against customer preferences. It shortlists products based on customer relevance before they reach the bidding engine, a process that uses machine learning to refine its accuracy.”

According to Moran, Citrus has created a micro-advertising opportunity for online retailers, similar to what Google and Facebook have done by giving small brands the ability to target customers in real-time at the point of purchase “with affordable click prices and small daily budgets, all without a huge up-front cost and risk”.

More in this category: « Superloop reports good year with profit of $7.1m Artificial intelligence set to change lease management processes »
Share News tips for the iTWire Journalists? Your tip will be anonymous