Call for renewal of 'innovation culture' at ethernet's 40th celebration 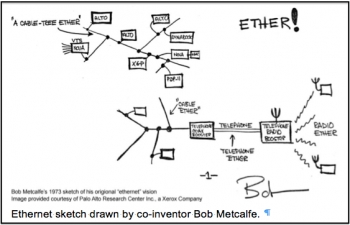 The organiser of a celebration next month of the 40th anniversary of the invention of ethernet is using the occasion to highlight the need for economies in the western world to maintain the culture of innovation that spawned the creation of ethernet.

UK based NetEvents says: "The birth of Ethernet – and so of modern networking – can be traced back to [The Xerox PARC research facility] and May 22nd 1973 when Bob Metcalfe drew a diagram and sent a memo outlining the Ethernet concept for the very first time."

According to NetEvents, "As the core of the world's economy shifts to the East it becomes even more vital for the West to maintain its culture of innovation to stay in the race... A key element of the 40th birthday celebrations will be discussion around the need to foster and maintain this dynamic spirit of innovation in today's globally competitive environment. This goes beyond purely business concern, innovation is vital to national pride and prosperity – even to survival. It is, therefore a concern for governments too."

PARC, now a wholly-owned subsidiary of Xerox, that operates independently, has a long tradition of innovation - it was famously where Steve Jobs got his inspiration for the Mac's pull down menus and mouse interface. Its current CEO, Steve Hoover, is calling for greater government involvement to maintain innovation in the face of greatly increased competition from developing nations in the East.

"If you look back at the history of the Internet, Arpanet was government-initiated. The tremendous commercial impact I don't believe would have occurred without their foresight in investing in those fundamental capabilities," he said.

"The government does identify fundamental research areas to work in and is willing to invest. That partnership – of government investing in core capabilities, in new areas, taking some of the higher risk, plus industry's ability to capitalise and leverage it – that partnership is really important."

The celebration will comprise linked events: a conference organised by PARC to explore the history of the innovation process and culture that created ethernet on 22 May, to be followed on 23 May by "a NetEvents-style day of discussions, hot debates and industry briefings, where the leaders of the ethernet industry – now a $100 billion a year market – can sit down with the world's IT press and industry analysts from more than 35 countries across the globe."

Both events will be broadcast live over the Internet, here.

Metcalfe, and his colleague David Boggs might have conceived ethernet in 1973, but it was several years before it made its way out of Xerox and into the wider world. According to Metcalfe, "The first ethernet was a one-node ethernet, which isn't very interesting... Then we had two nodes – which incidentally we called Michelson and Morley who happened to be the two physicists who disproved the existence of the Ether, so we thought that was ironic – then eventually the cable got strung all over the building....

"In those days our big innovation was putting a computer on every desk – I know that's hard to believe! We put one on every desk then ran this co-ax down the middle of the corridor and everybody tapped into it from their PCs. So it grew to fill this building. The benefits were immediate, and so other departments wanted in on the network. The labs wanted to be connected so, with an Internet protocol, we built an Internet that spanned the research laboratories of Xerox. It wasn't until the late seventies that we began leaving Xerox and installing ethernets elsewhere."

More in this category: « Digital post no big deal The billion dollar startup – from the former VMware boss »
Share News tips for the iTWire Journalists? Your tip will be anonymous