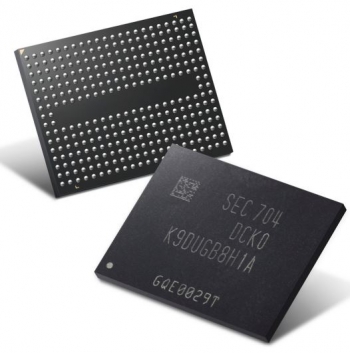 The key to this is Samsung’s 4th generation, 64-layer, triple-level-cell V-NAND flash memory that increases its single die density to 256Gb and IO speed to 1Gbps. Samsung has led in V-NAND, introducing 24 layers in August 2013 and now 64 layers.

The new 64-layer 256Gb V-NAND provides more than a 30% productivity gain, compared to predecessor 48-layer 256Gb V-NAND. It also has a 2.5V input voltage for its circuits, which gives up to 30% greater energy efficiency than the 3.3 volts perviously used. Reliability is increased by about 20%.

Young-Hyun Jun, president of memory business, Samsung, said, “With our 4th generation V-NAND technology, we can provide differentiated values in high-capacity, high-performance, and compact product dimensions, which together will contribute to our customers achieving better TCO results. We will continue to introduce more advanced V-NAND solutions and expand our flash business initiatives in maximizing an unbeatable combination of performance and value."

Kye Hyun Kyung, executive vice-president of the Flash Product and Technology team, Memory Business at Samsung Electronics, said, “Following a long commitment to innovative technology, we will continuously push the limits of generations of industry-first V-NAND production, in moving the industry closer to the advent of the terabit V-NAND era [90-layer]. We will keep developing next-generation V-NAND products in sync with the global IT industry so that we can contribute to the timeliest launches of new systems and services, in bringing a higher level of satisfaction to consumers.”

Samsung enabled these improvements by tackling a diversity of challenges with the advanced V-NAND manufacturing process. Chief among them was perfecting multi-billion channel holes that penetrate several dozen layers of cell arrays and minimising the loss of electrons from about 85.3 billion cells.

As the layers of cell arrays increase, the level of technical difficulty also increases, especially in making the channel holes homogeneous in their shape from the top to the bottom layer, and in properly dispersing the weight of all the layers to improve the stability of the channel holes.

Another challenge that Samsung overcame was to realise 64 layers of cell arrays based on 3D CTF (charge trap flash) structure and uniformly cover the inner side of each channel hole with an atomically thin, non-conductive substance. This led to the creation of smaller cells with improved performance and reliability.

Based on 15 years of research into its proprietary V-NAND 3D structure, Samsung has formed the basis for more than 500 patents related to essential technological findings.

Published in Manufacturing Technology
Tagged under

More in this category: « Epson releases low-TCO industrial robot range Intel Skylake and Kaby Lake have hyper-threading bugs – turn it off! »
back to top