‘Unlimited’ data comes back to US telco plans, with limits 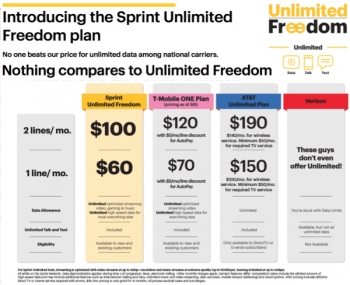 Unlimited isn’t truly unlimited with the limitations of 4G networks not yet being 5G capable, but within limits, two major US telcos have introduced unlimited voice, text and data plans.

Yes, you read that right – unlimited data, although as already mentioned, with limits.

Well, very easily, it turns out.

The two major US telcos to turn on "truly" unlimited voice, text and data plans, with true limits, are T-Mobile and Sprint.

T-Mobile is first to proclaim that from 6 September, it would be introducing its new T-Mobile One plan, and says that for US$70 per month, which doesn’t include taxes and fees, you get "unlimited talk and text and unlimited 4G LTE smartphone data while on our blazing-fast network".

Now, it’s important to note that videos will be streamed at a maximum of 480P, although if you pay an extra $25 per month, per line, you can get HD video streaming – something I didn't see Sprint below offering, although I might have missed it.

The download limit is 26GB of data. Once you do that, you get put into the highest 3% of users, and those users "may see their data traffic prioritised behind other users once they cross that threshold during their billing month".

As a result, we’re told, these users "may notice relatively slower speeds but only at specific times and places that may experience high network demand or congestion".

Mobile hotspot data is limited to 2G speeds, too, but if surfing the Web and doing stuff on your phone, you get 4G speeds.

You can also get additional lines with the same benefits for a family of users, see T-Mobile’s link for pricing.

Then there’s Sprint, which is undercutting T-Mobile by $10, not including those additional taxes and fees.

However, instead of a hard 26GB data limit, Sprint’s limit is 3GB less, at 23GB of data.

You can use some data at 4G speeds when your phone is a mobile hotspot, but once that’s used you revert to 2G speeds.

Sprint is even going one better with its Boost Mobile subsidiary, no longer having any connection with Boost Mobile Australia, which is offering an "unlimited voice, text and data" plan for $50 per month, $20 cheaper than T-Mobile.

More detail on both Sprint plans here – both are available now, rather than the wait until September that T-Mobile is subjecting its users to.

That said, especially with the other benefits T-Mobile is spruiking, it does sound like you're getting a better deal for your $10 extra per month than with Sprint or the $20 more than Boost, but as always, your mileage will vary, so best of luck in making the right decision – one which, in the US at least, will likely come down to who offers you the best reception in the places you work, rest and play.

Something like $59.95 per month for 50GB of data without a voice plan (and no speed limitations), but as a SIM that can be used in any fully mobile device, or Vivid Wireless' $89 per month plan for unlimited 4G fixed wireless in your home (or anywhere in the coverage area you take your powered SIM-equipped router) limited to 10 Mbps down and 1 Mbps up speeds — but obviously no voice or text with Vivid — is the closest we're going to get  for the time being.

Indeed, those two deals are pretty damn good for the Australian market for 4G network access in 2016.

However, when it comes to a voice, text and data plan to be called "unlimited", with those necessary limits, we might have to wait for someone like Kogan Mobile to be bold enough to find a way to emulate the T-Mobile, Sprint and US Boost Mobile plans, but that’s unlikely to happen in the near future. Or Ovo Mobile, or even Vaya or amaysim.

If it were to happen Down Under, unlimited data could be restricted to the 3G network and throttled to 2G speeds, but even so, it wouldn’t be much of too much use considering how slow 2G really is.

You want to be shaped to 2.75G speeds at the very least — EDGE — but even that is deathly slow these days. You'd really want a minimum 256kbps connection, if not 500kbps, but it's unlikely the carriers would be that generous.

It appears the whole unlimited data deal is a very clever piece of marketing, but if all of your users start streaming music and video every day, without caring how much data they use, your network had better be able to cope with it or you’ll be facing screaming customers.

On top of that, 20GB per month, before you get to Sprint’s 23GB limit and 26GB for T-Mobile before 2G throttling, is still much better value for the money than you’re getting from Australian telcos at the moment.

So there’s hope that the present in the US represents Australia’s future, I just happen to think it’ll still take a least a couple of years yet before we see anything similar in Australia – unless Kogan Mobile, OVO Mobile, Vaya or Amaysim find a way to beat everyone else to it first.

Here's Sprint's comparison chart to the rest of the US telco industry: 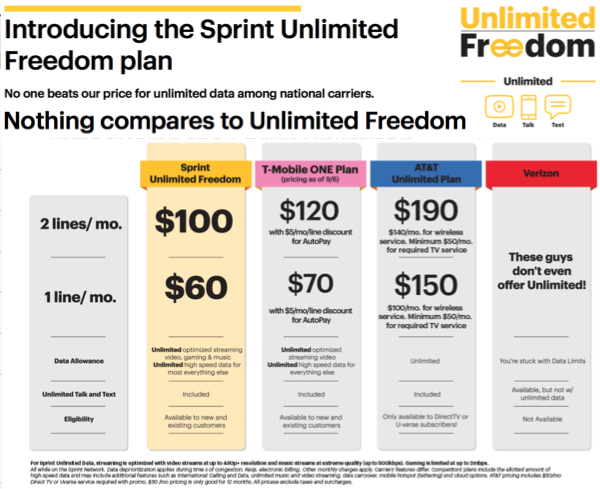