The D-Link G415 AX1500 4G smart router opens your home, office, or Winnebago to the world

The D-Link G415 was announced earlier this year with an exciting list of features - Wi-Fi 6, 3G/4G LTE, Gigabit Ethernet, mesh Wi-Fi, AI-powered smarts to always find you the strongest signal, and more. However, a list of features is one thing. This router really has to be experienced to truly appreciate it.

First things first; why a 4G router? I've long been a huge fan of a dedicated cellular router like this. Back years ago when I worked for companies on the merger and acquisition spree we had the choice of dealing with disconnected offices while waiting for our telco to spend three months designing and building MPLS network links to the new office … or I could set up a cellular router that connected to our private network and they were online and secure, with complete end-to-end visibility of private resources within minutes. I could set up site offices on client locations like a coal mine out in the Bowen Basin without needing to tap into the client’s network.

Of course, there are so many other uses. Road warriors can use a cellular router to get online anywhere, anytime - whether on the side of the road, in a hotel, or wherever they might be working. While a mobile phone hotspot serves in a pinch it’s less effective than a device literally designed to take mobile data and convert it into Wi-Fi. Also, for many business folks, their key application is voice - even if can’t connect to the Intranet or email it’s imperative they’re still able to make and receive phone calls. So, do yourself a favour, don’t use your phone as a hotspot - preserve your battery and work from a 4G router and get better connectivity.

And, not to mention, today's cord-cutter generations don’t see the need for a fixed-line broadband connection. It may seem unusual to those of us stuck in mortgage-land, but I’ve had 20-somethings staff members who literally use 4G broadband as their home Internet and are rapidly making that the new normal.

There are loads of reasons to use a cellular router - grey nomads being yet another - and you deserve it to yourself to have the best.

With the G415, D-Link has surpassed its previous standards; this is a unit that packs so much into something so small and simple.

As you'd expect, it lets you share your 3G or 4G connection with multiple devices. D-Link’s testing says it can handle up to 128 devices. In my home, there are multiple desktops, laptops, smart devices, phones, watches, tablets, games consoles, and so many other things. Last time I tried to count it was over 50 items that connect to the Internet in some way - even the Thermomix.

I doubt I'm unusual. Think about your own home - how many family members have a laptop, phone, tablet, and smartwatch? How many smart TVs and game consoles might you have? How about IoT devices like Philips Hue bulbs and Sensibo air-conditioner controllers? Today’s home truly has an explosion of connectivity.

The D-Link G415 helps you out; it has two external 4G LTE antennas that handle up to 150Mbps down and up to 50Mbps up. This then connects to all your devices via Wi-Fi 6 802.11ax. The Wi-Fi 6 standard provides faster speeds, greater capacity, and less network congestion - in short, it supports more people doing more things all at one time.

This Wi-Fi signal is distributed over the usual 2.4Ghz and 5Ghz frequencies but merges together in dual-band Wi-Fi to allow your users to simply connect to your SSID and automatically receive the best connection available. They can stream in 4K, game, and video chat with ease. What’s more, the smart AI will help you mesh more and more compatible Wi-Fi access points and transparently move your connection among them as you wander about the house. 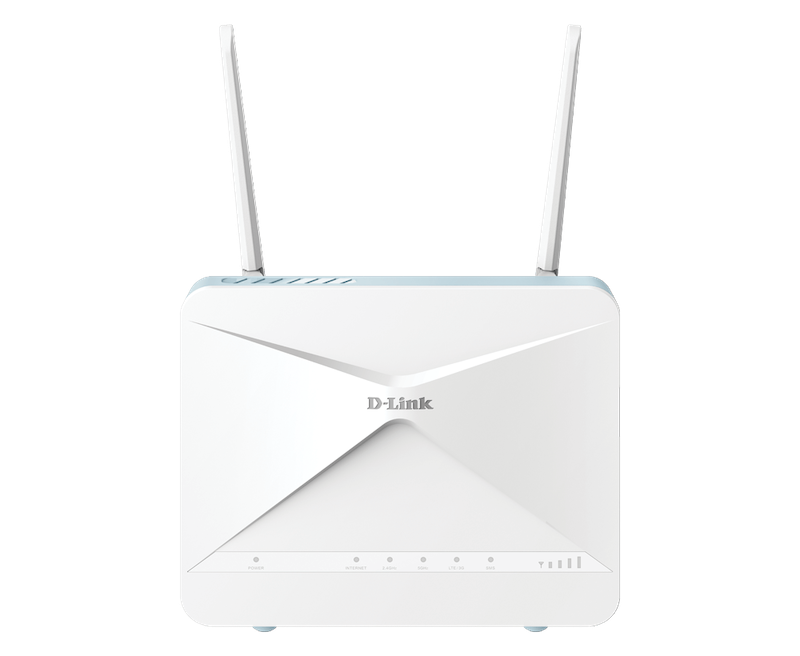 You also get 3x Gigabit Ethernet sockets on the back of the G415. So, in my case, I connected these up to three switches - all in different locations, but terminating in a central location in my lounge room. One is off to my office with my computers and Synology DS1621+ NAS, one to the nearby TV, Apple TV, Philips Hue hub, and another off to the so-dubbed “geek room” where my teenagers hang out with their PCs. Then the plethora of laptops and tablets and general things join in the action via Wi-Fi.

Everything worked; it worked terrifically. I enjoyed high cellular connectivity speeds - more than I can get on my NBN FTTN fixed-line - and I enjoyed responsive performance and connectivity on all the devices. The family didn’t notice I’d sneakily pushed them over to 4G while the children played games and my wife streamed Bridgerton series two.

However, even with this 4G connectivity, the G415 still has another trick up its virtual sleeve. You aren’t constrained to only cellular connectivity - it has a Gigabit Ethernet WAN port tool. Plug your fixed-line broadband into that, and now the router is relaying that via Wi-Fi 6 too. In my view, it’s truly a smart router that has 4G capability more than it is a 4G router. It happily merges your Internet together, delivering maximum performance and uptime and stability to your users. While you might (I did) find your cellular performance better than your fixed-line performance, we still live in a world where fixed-line data comes with unlimited quota options while cellular data has a cap. Thus, use the D-Link G415 here to turn your normal home Internet into a Wi-Fi 6 powerhouse with a 4G backup.

There is more; you can have your family and guest Wi-Fi channels, you get AI-based QoS, or quality of service, to auto-prioritise bandwidth intense applications like 4K media, and you have a rich set of parental controls where you can individually set schedules on devices and hours for family members. It’s even Amazon Alexa and Google Assistant compatible so you can literally speak “Ok Google, enable Guest Wi-Fi” or utter other commands. Imagine telling Google to kill the Wi-Fi at dinner time with only your voice. That’s what you can do now.

I began by speaking about my own experiences with cellular routers to connect new offices or remote worksites. The D-Link G415 takes that experience to an entirely unanticipated new level where it literally is the powerhouse that bridges your home to the world of information, education, productivity and entertainment. It’s no mere cellular router; make no mistake - this is a smart router that converges 4G LTE, Wi-Fi 6, Ethernet, mesh networking, voice assistant, and more, for the modern device-laden household or office or Winnebago.

More in this category: « Review: D-Link Eagle Pro AI M15
Share News tips for the iTWire Journalists? Your tip will be anonymous