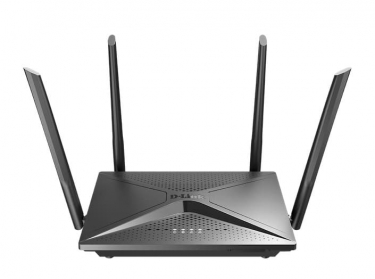 The D-Link DIR-2150 is an AC2100 Wi-Fi Gigabit router that the company says is suitable for medium-sized homes.

Let's start with the basic specs: 802.11ac Wi-Fi with WPA3 and guest zone support, four Gigabit Ethernet LAN ports plus another for the WAN port,

The AC2100 designation reflects speeds of up to 300Mbps on 2.4GHz and up to 1733 on 5GHz, and the Smart Connect feature balances connections across the two bands to make the best use of available capacity.

Setting up D-Link routers is usually simple, especially if you use the company's mobile app. The process is the same with the DIR-2150 as it is for other models, but for some reason our sample was initially reluctant to connect to the internet. We went through the steps several times, and neither the app-based nor web-based setup would complete, even after we tried the old "turn the modem off and wait 15 minutes" trick. But perseverance paid off, and – even though we didn't do anything differently – the connection eventually sprang into life. We have no idea what might have caused this difficulty, and neither had our D-Link contact.

In the small hours of the following morning the connection dropped out, and restoring it turned out to be a similarly drawn-out affair. But once it was back online, the router ran without a glitch for a month. This review would normally have been published after a shorter test period, but we wanted to be sure we could put those initial difficulties down to a fluke.

There were a couple of other issues we noticed during installation. Firstly, the power supply is the sort that hangs down from the mains plug, and consequently may not fit into sockets that are particularly close to the floor or skirting board. Furthermore, the plug itself is interchangeable (to allow one SKU to be sold in multiple countries), and it has 'fins' on each side, which tend to foul whatever's plugged into the adjacent outlet(s) on a powerboard. On the other hand, the router itself has a relatively compact footprint of approximately 20x13cm.

Secondly, the DIR-2150's firewall is switched off by default.

Quality of service support is important in households where the instantaneous demand for bandwidth sometimes exceeds what's available from the internet connection. The DIR-2150 uses D-Link's now familiar drag-and-drop approach: the various devices connected to the network are represented by 'cards' that can be dropped into available priority slots.

The QoS engine allows one device with highest priority, two with high priority, and eight medium priority. Anything else goes in the bottom tier. For this arrangement to work properly, the router has to know how fast the internet connection is, so an Ookla Speedtest client is built in and the results can be automatically transferred to the QoS settings.

Device priorities should reflect your priorities. What works for us is giving VoIP handsets top priority, followed by streaming video devices such as Apple TV, but gamers may have other ideas.

If you buy multiple services (internet, IPTV, VoIP) from a single provider that supports VLANs, the three classes of services can be prioritised by the router, and you can tell it the traffic type associated with each of the LAN ports.

Parental controls are available, but are device-based and so could be challenging where devices are shared by children of differing ages. The manual describes firmware version 1.00 and mentions a website filter, but we upgraded the firmware to version 1.10 during setup and this feature did not appear.

For situations where port forwarding is necessary, up to 24 rules can be created. Dynamic DNS services can be used with the DIR-2150, and the router supports VPN access from the outside world.

Support for Amazon Alexa and Google Assistant is available, but limited to five tasks: enable or disable the guest zone, read out the guest zone credentials, reboot the router and upgrade the router. There's no sign that Siri or HomeKit support will be added.

Once we had the DIR-2150 working properly, we didn't have occasion to reboot it. But some people like to reboot their routers regularly, and the router allows that task to be done automatically either daily or once a week.

You can also schedule a daily check for new firmware, and the update process saves a copy of the old firmware so there is less risk of the device being bricked if something goes wrong (eg, a power failure) during an update.

One of the most common home networking complaints we see is that a Wi-Fi router (often the one provided by the RSP) doesn't have enough range to cover the house. The location of the NBN wall outlet is often a limiting factor, as it can prevent the router being positioned in the middle of the house unless additional wiring is installed at the customer's expense.

D-Link says the DIR-2150 is suitable for a "medium home." The average free-standing Australian home has a floor area of around 230 square metres, but if you include apartments and other none standalone buildings that falls to approximately 190 square metres. The house we tested in was between those figures, so "medium home" seems a reasonable description, although the long and narrow two-storey design presents Wi-Fi challenges because the NBN cable modem is located in a corner of the building.

Most people are primarily concerned about internet access speeds rather than communication between different devices in the building, so Ookla Speedtest results are as meaningful as any.

The built-in client reported 48/18Mbps on a nominal 50/20 connection, and similar speeds where obtained from a phone a couple of metres from the router. Moving as far away as possible from the router while staying inside the house (with a floor and a few walls intervening) saw this drop to 25/16Mbps – not speedy, but fast enough to stream 1080p video (and possibly 4K depending on the codec, though we weren't able to test that).

That's respectable, but falls short of the D-Link Cobra router that we use as a yardstick. Since the Cobra costs more than three times more, we think the $249.95 DIR-2150 provides a good balance of price and Wi-Fi performance.

More in this category: « The Net Works When SolarWinds Network Performance Monitor Is on the Job Review: D-Link Covr-X1873 wireless mesh router »
Share News tips for the iTWire Journalists? Your tip will be anonymous