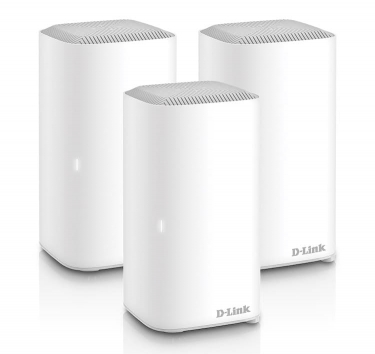 D-Link's latest Covr AX Wi-Fi mesh system is a force to be reckoned with.

The sample D-Link provided for testing was a Covr-X1873 – the 3 at the end denoting a three-pack of COVR-X1870 devices – but single units (X1870) and twin (X1872) packs are also available. The X1870 can be used standalone in a small home, or added to an existing installation to increase or improve the coverage.

The D-Link mobile app means the usual easy setup: scan the QR code on the enclosed card, answer a couple of questions, and the rest is pretty much automatic.

It's a similar process for setting up additional units, but you're prompted to connect them to the first node via Ethernet. It takes several minutes for them to sync up, but you can get on with another job while it's in progress. Once complete, you can move the device to the required location.

During previous tests of mesh systems, we've found that nodes haven't always worked well in convenient places. Remember that you need a nearby mains socket - the cable on the plugpack is typically only 1m or so long - as well as a suitable surface for the node such as a side table or bookcase.

But this wasn't a problem with the Covr-X1873. Presumably as a result of the improvements made in Wi-Fi 6 (802.11ax) and perhaps also to D-Link's designs, we were able to place the nodes next to spare wall sockets around the house and were immediately rewarded with a white light indicating a strong interconnecting signal.

Each unit has a WAN port. The first must be connected to your CPE (modem), and then you can use Ethernet rather than Wi-Fi to connect additional nodes if the premises are suitably cabled.

There are also four Gigabit LAN ports, so you're less likely to need to add an Ethernet switch to connect devices that don't have Wi-Fi interfaces or that you'd prefer to use on a wired network to free up wireless bandwidth. This does make for a relatively large piece of kit. The footprint is 10cm square, which isn't bad, but a height of more than 19cm makes it quite prominent.

Talking of Ethernet, I'm pleased to say that the WAN port is easily distinguished – it's the usual yellow colour, and it is separated slightly from the LAN ports. So we didn't make the connection mistake that we did with the Covr-1102.

One annoyance was that 'fins' on the sides of the plugpack were just wide enough to prevent some other plugs or plugpacks fitting into the adjacent socket. Another reason to suspect that D-Link might have read our review of the Covr-1102 is that the Covr-X1870 series comes with all-white plugpacks to match the main units.

Once setup was complete, we upgraded the firmware in all three units to version 1.01 before testing began in earnest.

Using Speedtest.net on an iPhone 12 mini (the only Wi-Fi 6 device we had on hand), the variation we saw as we moved around the house was slight – between 47/11Mbps and 43/10Mbps. For comparison, using our 'daily driver' router speeds went down as far as 26/10Mbps in the most challenging part of the house.

To put this in context, the speed measured at the router by the Covr-X1870's built-in Speedtest client was around 48/16Mbps at the times we measured the Wi-Fi speed.

For those comparing the numbers with those reported in our Covr-1102 review, Wi-Fi congestion has increased since the middle of last year with many more SSIDs being visible, and our daytime NBN speeds aren't quite as good as they were at that time.

Using a recent Dell Inspiron notebook with a built-in 802.11ac (Wi-Fi 5) adaptor was a different story. Initially, upload speeds were extremely slow, in the region of 1-3Mbps, and download speeds were in the 20s and 30s depending on the room.

After some investigation, we realised this was because the Dell had connected to the 2.4GHz band rather than 5GHz, despite - or possibly because of - the router's 'smart steering' feature. Changing Windows' settings to favour 5GHz gave better results, with peak speeds matching those of the iPhone but dropping to 40/10Mbps in the difficult spots. That's still respectable, but there was more variation from room to room than we saw with the iPhone.

Both devices switched smoothly from node to node as we moved between rooms.

We do realise that measuring internet speed isn't the be-all and end-all. But the ever-growing use of streaming rather than locally-stored media – not to mention ongoing working and studying at home – means it is typically far more important to people than the speeds that can be achieved within the house.

The next test was to use the Dell's Ethernet interface to measure the speeds available with a wired connection to each node in turn. With the node connected directly to the modem, we saw 47/12Mbps. That fell slightly to 47/11Mbps and 46/10Mbps as we moved along the chain. D-Link's software reported that the second node was connected to the first, and the third to the second, so that's not a surprising result.

Using Blackmagic Speed Test to transfer data between two devices in the same room as the first Covr-X1870 revealed peak speeds well in excess of 400Mbps over 802.11ac Wi-Fi, which was comparable with that achieved with an all-Ethernet connection between those same devices.

The Covr-X1870 includes the usual set of D-Link features, including a guest Wi-Fi network (beware: the default password is the same as that for the main network!), device-based QoS, firewall, port forwarding, virtual servers, VPN, support for dynamic DNS servers, quick VPN (with profile export for iOS and macOS), parental controls, scheduled rebooting (daily or weekly), manual or automatic firmware updates, and (limited) voice control via Alexa or Google Assistant.

Our experience was that the shape of the building and the location of the CPE may also be considerations. For example, a long and thin two-storey, three-bed townhouse may benefit from three X1870s rather than two, especially if the CPE is close to one end of the building.

We tested the Covr-X1870 over a period of several weeks, and it proved to be rock solid in operation.

When using new products, we sometimes find ourself wondering whether they are merely different as opposed to better. But that wasn't the case with the Covr AX, which represents a clear step forward for D-Link's wireless mesh networking range.

More in this category: « Review: D-Link DIR-2150 Uncommitted network changes are a thing of the past with SolarWinds NCM »
Share News tips for the iTWire Journalists? Your tip will be anonymous