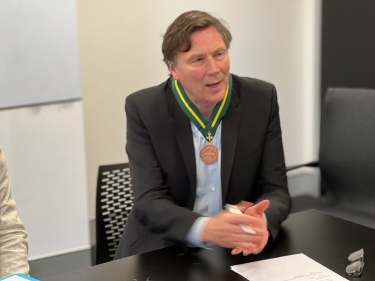 The Pearcey Foundation names the recipients of its 2021 National Awards as part of the virtual panel discussion Predictions for 2022 and Beyond.

The 2021 Pearcey Medal was presented to Tyro Payments and Xero chair David Thodey AO, who was also the former CSIRO chair and Telstra CEO.

“David Thodey has consistently demonstrated sincere and sustained interest in supporting many organisations in the ICT industry, including the Pearcey Foundation, especially where the focus is on attracting the next generation into our industry,” explains Pearcey Foundation’s chairman Wayne Fitzsimmons.

Born in Perth, Thodey’s family moved to New Zealand where he finished his secondary education at Nelson College and completed a Bachelor of Arts in Anthropology and English from Victoria University in Wellington. He first joined IBM in New Zealand in 1978 working in sales and marketing roles in New Zealand, Australia, Japan and the US, where he attended the Kellogg School of Management postgraduate general management program at Northwestern University in Chicago.

He returned to Australia permanently in the late 1990s with IBM, holding the position of managing director for IBM Australia-New Zealand between 1999 and 2001.

Since retiring from Telstra, Thodey has taken on several high-profile roles for state and federal governments including CSIRO board chair from November 2015 to October 2021, and Independent Review of the Australian Public Service (APS) chair.

The review’s purpose was to produce “an ambitious program of transformational reforms to ensure the APS is fit-for-purpose for the coming decades, and to guide and accelerate future reform activities,” with the final report released in December 2019.

In 2019, the NSW Government asked Thodey to chair an independent review of the state’s revenue system as it relates to federal funding and its interactions with the State tax system. Most recently, in March 2020, he was appointed by the Prime Minister as National COVID-19 Coordination Commission deputy chair, set up to coordinate advice to the government about the social and economic impact of the coronavirus pandemic.

In 2017, Thodey was appointed an Officer of the Order of Australia (AO) for distinguished service to business, notably to the telecommunications and information technology sectors, to the promotion of ethical leadership and workplace diversity, and to basketball.

He is currently Tyro Payments and Xero chair and an independent non-executive director of Ramsay Health Care.

Judy Hammond has been a major contributor to the ICT community, both in Australia and internationally, as a leader in the fields of human computer interaction, usability, and the social implications of information technology.

Hammond was born in New Zealand and graduated in Pure Mathematics from Victoria University in Wellington. She spent several years teaching in primary and secondary schools in New Zealand, UK, and Australia before completing a Master of Science and Society at UNSW.

After working as a programmer and systems analyst, Judy returned to the academia and joined the newly established Higher Education Research Unit at Monash University, and then the School of Computing Sciences at the University of Technology, Sydney.

There she developed and taught courses in programming, information systems, and social implications of computers. From 1978 to 1979, she was a visiting scholar at The Open University in the UK, developing course materials for the first distance-education course on computer-based information systems.

Hammond has contributed to several major state and federal government projects, concerning information technology and education. From 1984 to 1986, she participated in the National Computer Education Program to introduce computers into Australian schools and was director of the Information Technology in the curriculum program at the Curriculum Development Centre in Canberra.

She was one of the earliest members of the Australian Computer Society (ACS). Judy was Community Affairs Board director (responsible for Computer Education, Community Engagement, Young IT and Women in IT), ACS National Education Committee chair, and ACS representative on the Federation of Australian Scientific and Technological Societies, where she was vice president.

As part of her ACS effort, she produced films and videos about information technology and social change—with an emphasis on education—for two years, produced an interview series, The Computer Programme, which was broadcast on Sydney radio station 2SER. Hammond also contributed a chapter on ACS and Computer Education for Computing in Australia: The Development of a Profession, published by the ACS in 1994, whose editors included Trevor Pearcey. She was the second woman in the ACS to be elected to the rank of Fellow, and was made an honorary life member and inducted into the ACS Hall of Fame in 2003.

Hammond was conference chair for Interact ’97, bringing the IFIP’s international bi-annual conference on human-computer interaction (HCI) to Australia for the first time. She has published widely in the areas of social implications and HCI, and has been awarded many honours in Australia and internationally.

Alan Noble grew up in Adelaide, graduating in 1982 with first class honours in Electrical and Electronic Engineering from the University of Adelaide. Since that time, Alan has spent his entire career working in the ICT industry, both in California and Australia, collaborating across the commercial sector, academia, and government.

In 1988, he obtained an MSc from Stanford University in California, majoring in Computer Science and Artificial Intelligence. That same year he joined Schlumberger, honing his engineering and management skills, before co-founding his first startup, NetMind Technologies, in 1996.

There he focussed on change detection and notification (CDN) at a time when most companies were still focused on Internet search. NetMind was the first company to develop so-called persistent search for automatically notifying users of changed search results, a capability developed only much later in products such as Google Alerts.

While at NetMind, Noble also resumed a part-time lecturing role at University of California, specialising on delivering courses around distributed object programming and languages such as C++ and Java.

Noble returned home with his family in Adelaide, co-founded networking company Foursticks, then staged a management buyout with two former executives as NetPriva.

Although he sold the company in 2007, it was Noble’s encouragement of his fellow entrepreneurs at Foursticks, his resilience under pressure, and his ability to celebrate failure, that allowed them to move on to successful careers.

At this point, Noble was lured to join Google as Google Australia engineering director, responsible for Google's research and development operations, overseeing the growth of Google's Sydney Engineering Centre from 20 engineers to over 650.

In 2008, Noble was appointed an adjunct professor to the Adelaide University's School of Computer Science. He was an advisor to chief scientist professor Ian Chubb from 2013-2015 on strategies and priorities regarding STEM education and skills; and he served as South Australian Museum director for seven years from 2014-2021.

He mentored young budding entrepreneurs and engineers while at Foursticks, NetPriva and Google, and took on many extra-curricular activities during that period. He co-founded StartupAUS in 2013, a not-for-profit venture fostering and building the community of technology entrepreneurship in Australia, and AusOcean in 2017, a not-for-profit organisation developing and applying technology to learn more about our oceans.

“The great thing about our Pearcey Medallist and our Hall of Famer inductees is they are chosen by their industry peers in a nationwide vote. These are the very best in our industry based on a lifetime of achievement, and their contribution to the Australian ICT industry is permanently recorded in our Hall of Fame,” comments Pearcey Foundation national chair Wayne Fitzsimmons.

Commenting on Koo’s award, Pearcey Foundation chief judge Rick Harvey concludes: “Mohan’s achievement in building a global cybersecurity company is nothing short of amazing. DTEX Systems is widely recognised as one of the most trusted brands in the global cybersecurity arena, relied upon to protect the workforce, data and systems of the world’s most critical infrastructure entities, businesses and government agencies. Mohan’s remarkable story covers 20 years of perseverance and resilience, and is a testament to his passion and advocacy for technology, and the expertise and innovation of Australian entrepreneurs behind it.”

More in this category: « Dtex Systems' Koo named SA Pearcey Entrepreneur of the Year
Share News tips for the iTWire Journalists? Your tip will be anonymous