0
Shares
By University of Wollongong 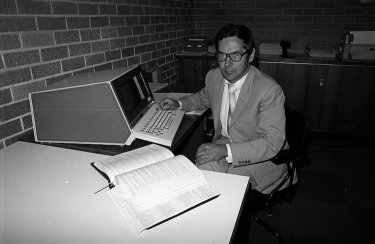 The funeral was held yesterday (24 January 2022) for Professor Juris Reinfelds, one of the landmark pioneers of computer science and the last survivor of a team that made Wollongong a global brand.

He was the Foundation Chair of Computer Science in the Department of Mathematics, but his impact was felt far beyond UOW.

Reinfelds helped establish an international reputation in the field of computer science for the University of Wollongong, with colleagues Ross Nealon and Richard Miller.

While at UOW, the three academics are credited with the first port of the operating system, Unix, to Interdata in 1977 – the first successful port of any operating computer system.

This enabled Unix to run on cheaper and more widely available computers than just mainframe super computers. In the process, they helped democratise the operating system.

He created the first Apple Macintosh lab in the world in 1984, achieving a six-month jump on North America, located in ‘Skylab’ (a re-purposed portable teaching building), thereby proving all first-year Computer Science students with access to a personal computer.

He also pioneered computer summer schools for primary and secondary students, again driven by a vision of providing access to computers for all students.

“As a result of his work, many people in the US know the name ‘Wollongong’ not from the University, but from the Wollongong Group, Inc., the company he helped set up in California to commercialise the research,” he said.

He worked at a number of institutions in Europe, Australia and the United States, including stints at the NASA Marshall Space Flight Centre in 1965-1966 and CERN, the European Organisation for Nuclear Research in Geneva Switzerland from 1973-1975.

Following his work at UOW, he spent many years working in the United States, holding professorial roles at New Mexico State University, Las Cruces and a visiting fellowship at the University of Texas, El Paso.

His ongoing support for student achievements at UOW are marked by the establishment of the Ross Nealon prize for second-year students in the Bachelor of Computer Science degree.

He moved back to Wollongong in 2006 to spend more time with his children and grandchildren, and is survived by his wife Lauma, sister Gundega, sons Peter and Ivars, and five grandchildren.

More in this category: « Good appointment for government New national reseller manager at Intel »
Share News tips for the iTWire Journalists? Your tip will be anonymous