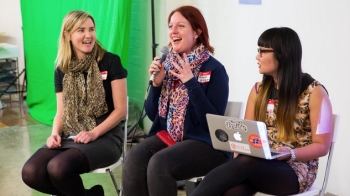 Five young Australian women have launched Girl Geek Academy, a new startup aiming to teach one million women how to build apps and create startups by 2025.

The startup, launched at a vibrant launch party last night at Melbourne's Pozible HQ, follows in the footsteps of Girl Geek Dinners and events like She Hacks, Melbourne's first all-female hackathon, and describes itself as "the first female-founded global learning academy for girl geek hackers, hustlers and hipsters,"

The Girl Geek Academy website went online yesterday and explains "Our mission is to increase the number of women with technology skills. The current internet was primarily built by men and we want to know what the internet would look like if there were more women building it.

"Only 12% of engineers are women and we believe we can help to change the ratio. We create educational experiences that bring female hackers, hustlers, hipsters and startup enthusiasts together to learn, teach, share, form teams and build the internet."

The team will use workshops, intensive weekends, online courses, hacakthons and makerfests so women can both learn and teach, and most importantly get more involved in technology and what it has to offer.

"We aren't about being unhealthy, burnt out and undervalued," the startup says.

Following the success of Girl Geek Dinners Melbourne and events like She Hacks, co-founder Tammy Butow said she wanted to take it to the next level.

“She Hacks was the first all women hackathon run in Melbourne, I wanted to create a platform to foster learning and teaching for us girl geeks,” Butow, who is a Senior Digital Strategist at the National Australia Bank, said.

The movement has its sights set on becoming global - launch events are already in the works for Brisbane and New York.

As we reported last week Google has invested $50 million to encourage more women to get into tech, teaching girls how to code and putting funding towards changing computer scientist stereotypes in the media, among other initiatives.

With one year of workshops already planned on their calendar, the Girl Geek Academy website is online now at https://www.girlgeekacademy.com

Last night's event also saw the announcement of That Startup Show, an upcoming live TV show focussing on the Australian startup scene, hosted by Hungry Beast's Dan Ilic.  The launch will be held at Melbourne's Savoy Tavern on 31 July.

More in this category: « Slipping Australian education under threat from reduced ICT spending Training needs are changing »
Share News tips for the iTWire Journalists? Your tip will be anonymous