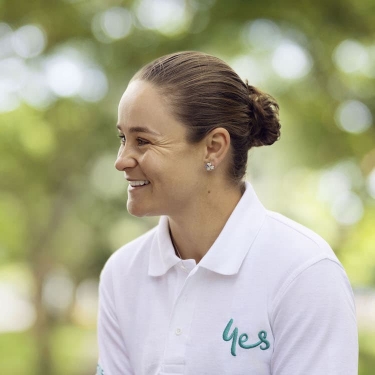 "Ash is a true Australian icon and role model – her performance on the courts epitomised a challenger spirit, determination and strength, while her community work has demonstrated the power of optimism in action," Optus CEO Kelly Bayer Rosmarin.

"We're thrilled to bring this partnership to life and inspire more Australians to enable their tech futures and unlock the power of 'yes'.

The role appears to go beyond that of a brand ambassador (a common arrangement between companies and well-known individuals), because according to Optus, Barty will "feature in a mix of content initiatives, employee engagement programs and community-focused campaigns aimed at connecting Australians together and inspiring them to say 'yes' to their dreams, goals, and ambitions."

Barty said "I decided to prioritise Ash Barty the person, over Ash Barty the tennis player, and in doing so I've realised I can help so many more people through my charity work, my role as the (Tennis Australia) national indigenous tennis ambassador, and now with Optus as their chief of inspiration."

Barty was the number one ranked women's singles player when she retired from tennis in March 2022.

During her professional career she won the women's singles competitions at the Australian Open (2022), Wimbledon (2021) and the French Open (2019). She also won the women's doubles at the US Open in 2018.

More in this category: « Sandeep Garg joins InMoment as chief product officer Raos runs NZ region for Commvault »
Share News tips for the iTWire Journalists? Your tip will be anonymous