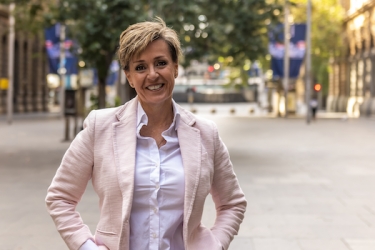 GitHub announced today there's a new hubber on deck. Sharryn Napier joins as VP of sales, APAC and has her eyes firmly fixed on how to help enterprise and government clients use GitHub to get to market sooner.

Sharryn Napier is no stranger to running the APAC region. She describes herself as a builder and an architect and loves the challenge set before her - a challenge to explode GitHub’s reach in the region as well as the depth of how customers can leverage the platform’s capabilities to maximise their efficiency.

Napier is based in Sydney, is a member of the Australian Institute of Company Directors and sits on the National Board of the AIIA. Strategically, she is charged with accelerating GitHub’s go-to-market for APAC, providing the overall strategic direction across the region, driving business growth, and capturing the region's enormous opportunity by embracing direct and indirect channels to market.

GitHub's San Francisco HQ has an impressive library, in which every new Hubber is asked to contribute a title that is meaningful to them. Napier’s recommendation is Radical Candour, by Kim Scott, a book on building strong teams through meaningful dialogue.

Previously Napier ran the APAC region for Computer Associates for nearly nine years as well as for Serena Software for a further three years. She moved sideways into more local roles while her son was growing up, but that son is now a young man of 26 years of age and so when the GitHub opportunity presented itself to once again run the helm of building and developing the APAC region she embraced it with both hands.

Of course, it wasn't purely the role itself that appealed to Napier; she explains it was the right role at the right company with the GitHub culture and developer-first mentality striking the right chord.

A big part of Napier's focus will be people; "I'm a big people person," she says, also describing herself as “a bit of a mother hen.”

"I like talking to customers," she says. "Why do they use the software? What do they get out of it?” - these are the things Napier is bursting to learn from customers of all sizes and to aid them in solving their own business problems and reaching their customers and citizens.

Napier sees her role at GitHub as being at the heart of this. She explains while GitHub has over 73 million users globally, with over 960,000 developers in Australia alone, the enterprise and government sales in our region is still embryonic. The potential user base is vast, but for Napier, it’s not simply a sales game; it’s about demonstrating to organisations the efficiencies and collaboration GitHub offers to them. “This is the real value they can get from the platform,” she says. “It enables enterprises and governments to get more products to market, or to deliver more features.”

Napier also looks forwards to forging cross-collaboration across countries. "We can see what's going well in India and Japan, for example, and then say let’s explore that in Australia and take it to Singapore or Korea.”

Make no mistake, a lot of hard work has already been invested in the region by GitHub through a solid tactical approach in building out the business. However, the time is ripe for a strategic play, and here is where Napier fits in. “It’s time to put that glue in - and I’m that glue,” Napier jokes.

“We're really on the cusp of something," Napier says.