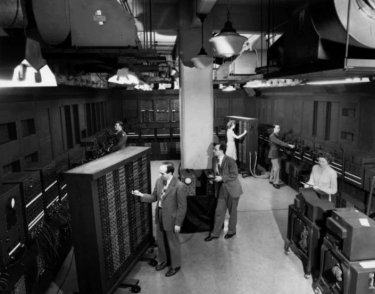 In just a few days time on February 15, it will be 75 years since the deployment of the first all-electronic, programmable computer at the University of Pennsylvania in Philadelphia, called ENIAC, which stands for an "Electronic Numerical Integrator and Computer".

According to Wikipedia, ENIAC was "the first programmable, electronic, general-purpose digital computer. It was Turing-complete, and able to solve "a large class of numerical problems" through reprogramming."

Britannica explains that ENIAC used plugboards for communicating instructions to the machine; this had the advantage that, once the instructions were thus “programmed,” the machine ran at electronic speed. Instructions read from a card reader or other slow mechanical device would not have been able to keep up with the all-electronic ENIAC. The disadvantage was that it took days to rewire the machine for each new problem, which was a liability.

Even so, ENIAC was the most powerful calculating device at the time, and had "conditional branching" which means it could execute different instructions or alter the order of execution of instructions based on the value of some data, which gave ENIAC a lot of flexibility and meant that, while it was built for a specific purpose, it could be used for a wider range of problems.

Although ENIAC was completed in 1945 and first put to work for practical purposes on December 10, 1945, Wikipedia states "ENIAC was formally dedicated at the University of Pennsylvania on February 15, 1946 and was heralded as a "Giant Brain" by the press."

As the ENIAC Day website states, "the impact this machine has had on modern computing is why its creation is still recognised and celebrated today."

The primary sponsor of ENIAC Day is Unisys, which is fitting because the company is the successor to Sperry UNIVAC, the company founded by ENIAC inventors J. Presper Eckert and John Mauchly. These two gentlemen also invented UNIVAC, the first commercial computer, which has its own interesting history and background.

There are several events to celebrate ENIAC Day, and while the official Events page at the ENIAC Day site says the events are worldwide, the ones listed are in the US, so the time zone caveats apply, with some physical events and others you can access via Zoom. Obviously, for us in Australia, the events will be on during Feb 16.

The ENIAC Day site also has some interesting trivia which I'm reprinting below, which compares ENIAC to today's supercomputers.

The first question is: "How many ENIAC computers would be equal to one modern IBM Supercomputer?"

We're told that ENIAC had a clock frequency of 5000 Hz. For the most basic instructions (add/subtract values, load value, save value, etc.), the ENIAC could finish one instruction per clock cycle. More complicated instructions (accumulation, multiplication, division, etc.) would need multiple cycles.

ENIAC was estimated with a performance of 0.00289 MIPS (million instructions per second). You might've heard of flops (floating point operations per second), which is a more reasonable metric for performance, but is not always available for older computers.

The ENIAC was weird in that it directly stored decimal digits instead of binary numbers the way it's done today, so getting a performance number isn't one to one.

However, these were decimal numbers with 10 digits stored, so we can say that the ENIAC would be doing basically one flop per instruction (or 0.00289 megaflops).

But how fast was ENIAC, really?

The ENIAC Day site say this answer was found on Reddit, with details here.

In addition, the CEO of Computer Museum "Compuseum", Jim Scherrer, makes a plea for you to "Shut down your computer for 1 minute in honour of ENIAC".

The Scherrer message is: "I'm requesting that all citizens of the world turn off their computers for one minute at two fifteen o'clock (2:15PM) Eastern Standard Time on February 15th (2/15) as a tribute to the ENIAC, the world's first all electronic, programmable computer.

"ENIAC Day celebrates this great computer's memory and its essential role in the march of the computer age. Similar interruption of web servers, data centres and critical host computers is deemed too dangerous since so many essential services rely on this computer power.

"A one minute shutdown of all non-essential computing devices is a fitting demonstration of the debt owed to the ENIAC and the unique efforts of its founding creators Eckert and Mauchly."

So, there you have it. The first-all purpose computer is 75 years old, showing that for all of our advancements, we're still very much in the black and white TV era of modern technology when you compare what we have to what sci-fi writers and our own imaginations can come up with.

Even so, the creation of ENIAC was done not by maniacs but geniuses, upon whose shoulders the tech world stands today, so a big thanks to J. Presper Eckert and John Mauchly for creating ENIAC and kicking off the digital computing revolution we all take for granted today!

I just to be here with as many people reading as possible for the 100th anniversary in twenty five years to come.

More in this category: Death of Paul Shetler »
Share News tips for the iTWire Journalists? Your tip will be anonymous