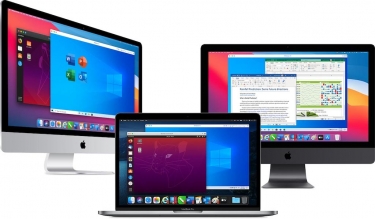 Parallels revolutionised the industry giving Mac users the world's first virtualisation software for Intel-based Macs way back in 2006. 15 years later the product is still going strong, and Parallels is offering a 25% discount to celebrate.

Parallels Desktop for Mac has continued evolving and innovating through its 15 years, helping Mac users run over 200,000 Windows applications on their devices, side-by-side with Mac apps. There’s no need to choose one operating system over the other like with Boot Camp, or a need to constrain virtualised apps all into a single desktop window together.

Virtualisation has long gone from being relegated only to servers with so many good reasons to run virtualised operating systems. You might write cross-platform software, you might need the flexibility of your own computer while still fitting into a corporate Windows-based Active Directory environment, or you might even want to play some games or other apps that only exist on Windows. Whatever the case, Parallels has provided solutions to over seven million customers who rely on the product each day.

Here are some highlights across Parallels Desktop's 15-year history:

The product first launched on June 15, 2006, and unveiled Coherence Mode on February 27, 2007. This gave customers the option to hide the Windows desktop and instead use Windows apps in the Mac environment in just another window as if they were native Mac apps. This remains today as the most popular way for people to use Parallels.

Support for Apple trackpad gestures and keyboard actions was added on November 4, 2009, 64-bit mode on September 14, 2010, and then the business volume-licensing edition in June 2011 allowing Parallels Desktop deployment and activation at scale.

As Parallels enjoys its fifth anniversary, NASA itself was seen to be using Parallels Desktop on its MacBook laptops on November 6, 2011, as part of the project that saw the Curiosity Rover land on Mars.

Direct X 10 and Bluetooth support was added on September 4, 2012, and Parallels Access saw the light of day on August 28, 2013. This provides fast remote access into a Windows or Mac system from iOS and Android devices, as well as through a browser.

August 19, 2015, saw the release of Parallels Desktop for Mac Pro Edition, delivering an advanced version for power users and developers. It also brought the world’s first voice-activated personal assistant on the Mac through Windows 10’s Cortana. It wasn’t until later that Siri itself came to the Mac.

August 13, 2019, brought support for Direct X 9, 10, and 11 on Apple hardware, allowing much more demanding Windows programs like CAD apps and games on a Mac.

Parallels Desktop for ChromeOS was released on October 20, 2020 - the world’s first software to run Windows directly on enterprise Chromebooks. The Chromebook, a light and simple web-browser based operating system now genuinely can execute native Windows apps like Microsoft Office through Parallels.

This year on April 14, 2021, the current release of Parallels Desktop 16.5 for Mac launched with full native support for the Apple M1 chip accelerating performance even further.

That's the history of Parallels Desktop in a nutshell, but the product continues to evolve and innovate and provide users of all capabilities and needs worldwide with the freedom of choice of operating system and application while running on solid Mac hardware with its crisp Retina display and intuitive touchpad.

You can be part of the next chapter in Parallels history: 2021 to the future

To celebrate the 15th birthday Parallels is providing 25% off Parallels Desktop for Mac until 4:59 pm on July 2nd, 2021. The discount is available to new customers or those with a lapsed subscription, or who have not previously had a Parallels subscription and are on an earlier version. The discount applies to the first year for a new subscription. Active subscribers are unable to use it to renew their subscription. The promotion is available for purchases directly from Parallels, and third-party retailers are not included.

More in this category: « Total bitcoin value exceeds cash in UK, Canada, Australia Cryptocurrency being less talked about in social media, according to GlobalData »
Share News tips for the iTWire Journalists? Your tip will be anonymous