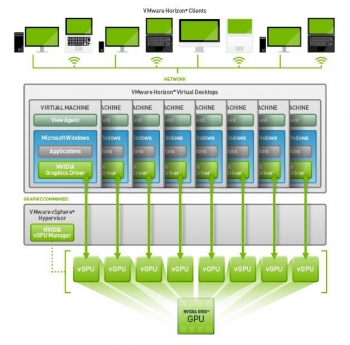 Nvidia's Grid virtualisable GPUs can now be used with virtualised desktops under VMware Horizon and vSphere.

Nvidia Grid shared GPUs have previously been accessible to virtualised desktops using Citrix's XenDesktop software. One example of such a system is HP's DL380z.

At the high end, an approach known as vDGA (virtualised dedicated graphics acceleration) provided a one-to-one matching of users and GPUs - but "one user per GPU is fairly limiting," he said.

The Grid vGPU (virtualised GPU) approach used by Nvidia's Grid cards uses an approach called 'mediated passthrough' that allows multiple users to share a pool of GPUs, making it suitable for a wide range of users whether they are running programs such as AutoCAD, Photoshop or Google Earth, said Wade.

Most enterprises have a desktop virtualisation program, but the lack of vGPU capability meant it wasn't practical to provide virtualisation for all users, even though demanding users such as designers could see the advantages of being able to work anywhere rather than being tied to specific workstations.

vGPU technology lets IT reap the benefits of moving more applications into the data centre, while users get the mobility - and other - advantages of virtualised desktops.

Virtual desktops are now feasible "for any types of users that need it," said Wade.

Grid vGPU presents a virtual GPU to each virtual machine and allows the use of the standard Nvidia driver. It provides a way of sharing the power of GPUs without sacrificing performance, and up to 96 users can share one industry-standard server.

There are no fundamental differences between Grid vGPU Citrix XenDesktop or for VMware Horizon and vSphere, said Wade.

Grid vGPU for VMware has been in use by more than 300 customers - including Airbus and Denso - for around four months.

"This was the last hurdle to offering a complete VDI ecosystem.

"Beyond the traditional arguments for VDI solutions, such as total cost of ownership, security and management, we'll also gain benefits specific to our work."

Wade told iTWire that vendors have yet to announce preconfigured virtual desktop servers incorporating Grid vGPU, but that he expected announcements from multiple vendors and channel partners "soon."

Since Dell already sells servers incorporating Grid and has now announced support for Grid vGPU on its Wyse Datacenter for VMware Horizon View product, it seems likely that it will be one of the first to announce a preconfigured system.

Alongside the general release of vGPU support for VMware, Nvidia announced its customer direct access program which provides customers and partners with direct access to VMware and Nvidia experts, a library of content including deployment guides, and a forum for peer support.

Wade explained that while setting up vGPU is a quick and easy task, IT staff have not yet had an opportunity to acquire experience in configuring VMs for desktop virtualisation with vGPU the way they have with, say, virtual servers running SAP. The program is therefore "more about the optimisation for different user types."

Participation in the program is optional, and is restricted to customers that meet certain requirements.

More in this category: « Citrix brings Android for Work under its EMM umbrella VCE VxRack fills gap between converged blocks and appliances »
Share News tips for the iTWire Journalists? Your tip will be anonymous