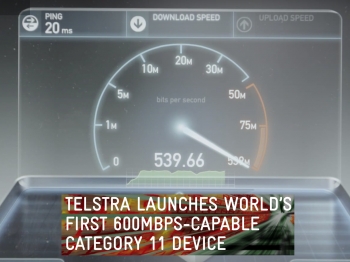 Telstra has made some major announcements, launching VoLTE calling on its network while also launching its claimed world-first Cat 11 Netgear Wi-Fi hotspot.

Below is Telstra’s 1-hour presentation to the media today in full, where Telstra demonstrated not only its Telstra/Netgear branded Wi-Fi 4GX Advanced III hotspot, with the live demo showing download speeds of 600Mbps and upload speeds of 40Mbps, but also VoLTE (voice over LTE) phone calls on Samsung Note 5 and S6 Edge+ devices.

Since the presentation, Telstra has also confirmed that ‘the brand new iPhone 6s and iPhone 6s Plus will be among the first enabled devices, along with Samsung’s Galaxy Note 5 and Galaxy S6 Edge+ and the latest Sony Xperia devices, with others to follow.

Telstra will also have Cat 11 devices in store from 29 September.

Here is today’s 1-hour, detailed presentation in full - the article continues with plenty more (and another Speedtest.net video further below):

VoLTE calls are the ‘next-generation’ of voice calling, keeping calls on the 4G network (so callers don’t drop back to the 3G network when making calls), keeping data when on a call faster and more network efficient, while dramatically speeding up the call-set up time, so waiting between placing the call and the call starting to ring being at least halved.

Mike Wright, Telstra’s GMD of Networks noted at at a Telstra Exchange blog post that, for most of this year, Telstra has been ‘undertaking one of the largest and most complex changes to voice calling in our network for more than 40 years.’

From today, Telstra says it will be ‘progressively enabling the new 4G Calling capability, Voice over LTE (VoLTE) for Telstra Mobile Post-Paid consumer customers with a compatible mobile handset to use 4G Calling.’

Wright continues his Voice over LTE explanation, stating they are ‘the next generation of how voice calls are carried’ over Telstra’s network, whereby in the 4G areas where VoLTE has been enabled, Telstra’s customers with a VoLTE enabled handset can make voice calls which are then ‘integrated into the 4G LTE data stream rather than the previous arrangement of reverting back to 3G.’

As noted above, 4G Calling allows Telstra’s customers ‘to maintain a full 4G experience during a call,’ meaning ‘voice and data stay on the same part of the network, therefore delivering faster data access while using the internet as well as super-fast call set up times.’

Dubbing it a ‘multitasker’s dream’, there is more: HD Voice. HD Voice doesn’t just continue working between HD Voice capable smartphones, it also works when calling a call to a Telstra NBN service customer with a HD handset, or to any of Telstra’s business and enterprise services using HD IP Telephony handsets, where ‘you will also be talking in full HD.’

Calling it ‘seriously exciting because it’s only the beginning,’ Wright points out that ‘we can now link the future for voice to the world of multi-media which will enable new and interesting applications and call flexibility, including a path to native voice calling over WiFi (VoWiFi) allowing a seamless handset experience, video calling over LTE (ViLTE) and even higher definition audio.’

On that note, Wright says ‘we’ve been at the cutting edge of audio solutions for a few years now and have several mature technologies in the market. Telstra was the first carrier in Australia to offer HD Voice calling to our mobile customers back in June 2011 and we continue to have one of the largest mobile HD Voice footprints globally. In fact in Australia, 70% of mobile handsets support HD and over 30% of all mobile calls use HD Voice today.’

Wright advises that the ‘roll out of VoLTE will be staggered, gradually enabling the full HD capability for different types of calls (ie 4G to 4G, 4G to fixed, 4G to 3G etc).’

Initially, Telstra’s post-paid consumer customers will be gradually enabled, and Telstra will ‘later be extending the VoLTE capability to its Business and Enterprise customers, as well as its prepaid customers in the future.’

Telstra says its ‘main priority throughout the VoLTE rollout is to protect and preserve the superior network experience and world class voice quality that Telstra currently offers to its customers while introducing the benefits of the new 4G Calling service.’

As noted above, the new iPhones, the latest Samsungs and the upcoming new Sony Xperia smartphone will all be VoLTE capable, with Telstra saying it will publish a list of devices that are compatible. This should include older VoLTE capable devices such as the Samsung S5 device as was demonstrated in November 2014 when Telstra’s made the first official public VoLTE call - you can see our video of this event here.

So, to be ready for the switch to 4G Calling, you’ll need to make sure your ‘eligible device’ has a software update, which presumably Telstra will be issuing, and ‘some customers may be required to turn on Voice on 4G in their settings as well.’

For those who are fans of Telstra’s ‘Caller Tones or Mobile Protect’ - you will not be compatible with VoLTE to begin with.

In addition, once VoLTE has been activated, you should experience a seamless transition, with the only ‘give away’ being the 4G icon remaining on during voice calls, rather than flicking over to 3G.

Unsurprisingly, Mike Wright states Telstra is ‘proud to continue to lead the industry by again being the first carrier in Australia to offer this very latest calling technology to our customers with a compatible mobile handset in VoLTE enabled areas and to be included in only a select number of carriers worldwide that are currently offering VoLTE technology to their customers.’

Also part of today’s presentation, which actually comes first in the video above, is Telstra’s release of its new ‘up to’ 600Mbps capable Cat 11 device - the Telstra/Netgear 4GX Advanced III, created ‘in collaboration with Netgear, Ericsson and Qualcomm.’

The news comes a month after Telstra announced the launch of the first Cat 9 (up to 450Mbps) devices on Telstra’s network, which iTWire covered here.

Telstra’s 4GX Advanced III hotpost uses ‘3 band Carrier Aggregation technology,’ which means users ‘will have access to significantly faster peak download speeds and added capacity in the network,’ which is something Telstra was testing way back in April, as iTWire covered at the time.

You can see a video of the speeds Telstra has reached, embedded below - article continues thereafter!

What Cat 11 devices also do is boost network capacity, with Telstra’s Executive Director of Mobile, John Chambers, stating his excitement ‘to offer more cutting-edge solutions to customers thanks to strong relationships with the partners involved’ and saying: “This is the world’s first commercially available Cat 11 experience and is a breakthrough addition to our mobile device range thanks to our ongoing partnerships with these leaders in innovation.

“When you combine the power of Qualcomm Technologies’ Qualcomm SnapdragonTM X12 LTE modem with Qualcomm VIVETM 11ac, Ericsson’s LTE-Advanced Carrier Aggregation technology on Telstra’s network, and the NETGEAR AirCard 810S, it really is an unbeatable technology that we are pleased to offer our customers before anyone else in the world.”

Supporting up to 15 devices simultaneously, the with Telstra’s demo video (embedded below) showing connection speeds of up to 600Mbps down and 40Mbps up.

You’ll see those speeds reached ‘live’ in the 1-hour Telstra video embedded above, although in my own tests, I’ve ‘only’ been able to get a maximum speed of 63Mbps down and 35Mbps up using the Speedtest.net website.

Telstra’s Advanced III hotspot was placed in a cradle with special antennas in it, which may have helped it get an even better signal and thus more bandwidth, but either way, it’s an impressive device with impressive speeds, offering up to 11 hours of continuous use or 260 hours on standby.

Telstra explains that ‘the early Cat 11 enabled footprint is concentrated on the CBD’s of Eastern Seaboard capital cities; initially Sydney, Melbourne, Brisbane and Canberra, and in selected popular holiday locations. The network reach supporting these Cat 11 speeds will also continue to expand in line with growing mobile data demand.’

As always, Telstra warns that ‘typical user speeds will be lower and depend on factors such as location and network conditions, and, when customers use a WiFi device, the total number of users connected to the device.’

More in this category: « Most countries not going all fibre says Morrow Boost Mobile gets 4G boost well before Telstra MVNOs »
Share News tips for the iTWire Journalists? Your tip will be anonymous