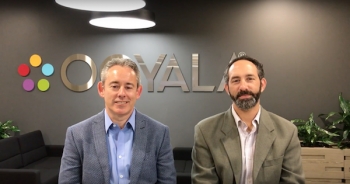 iTWire talks to the new Ooyala chief executive Jonathan Huberman and Ooyala’s GM of the APJ region Steve Davis about the company’s plans going forward and how it is helping business stream — and monetise — its video.

Huberman is in Australia this week, meeting customers, staff and Ooyala’s owner, Telstra, and he, along with the now Sydney-based Davis, took time to sit with iTWire and take part in a video interview.

Ooyala was in the news a lot last year for not performing as well as Telstra or the company itself, presumably, would have wanted, but with a seasoned new CEO in place, the company is naturally looking forward to the future and is clearly bullish on its global prospects.

I started by asking Huberman to briefly introduce himself and tell us about his impressive CEO history, including his time as CEO of Iomega, and his journey to Ooyala, and we then heard some introductory background from Davis and his journey, too.

We covered Ooyala’s current offerings to its global customers, and the fact it is aimed at enterprises, broadcasters, big businesses – and not the SME market or YouTube videographers such as myself.

Huberman gave us an overview of where he saw the Ooyala business going over the next 12 months, and talked about “the capability for broadcasters to build personalised experiences across every screen”, which naturally elicited a mention of the “script-to-screen” capability that Ooyala says it offers, and discussion about OTT video and more.

We talked about automation and workflows, and how the video world had been lagging in this area.

I noted that I received the Ooyala newsletter, and given its July edition spoke of YouTube TV, wondered if they had any inside knowledge of whether it might arrive in Australia anytime soon, but as you’d imagine, they naturally had no knowledge of if or when Google might ever bring that service down under.

It was time to then look at where the industry might evolve to over the next decade, before hearing about great advice both gentlemen had received over the years to help them get where they respectively are today.

We finished with final messages from both gentlemen for iTWire viewers and readers, and for Ooyala’s current and future customers.

Here’s the interview in full:

More in this category: « In context, Aussie telco complaints are up to 9 per 10,000, Apr-June 2017 Pivotel’s pivotal customer service delivers record low telco complaints »
Share News tips for the iTWire Journalists? Your tip will be anonymous