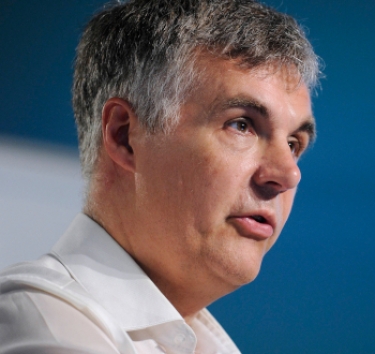 Stephen Rue has again come under fire from the CEPU. Supplied

The union representing workers at the NBN Co has levelled strong criticism at the company over the fact that chief executive Stephen Rue has given himself a $1.2 million bonus while overseeing a cost blowout of $6.7 billion and not taken 300,000 premises into account in the rollout plan.

The cost blowout and the fact that so many premises were missed in the rollout plan were revealed during Senate Estimates.

Communications, Electrical and Plumbing Union national assistant secretary James Perkins said in a statement: "It's unbelievable that Stephen Rue is on a seven-figure, taxpayer-funded salary, and can't get the basics right.

"This really shows how plagued the NBN system is from top to bottom. We've been calling for an overhaul of the system for months, and this news couldn't be any more of a red light that we've got a big problem with our national broadband network.

"It's frankly outrageous that Rue is pocketing $3.1 million of taxpayer funds only to make mistakes like this, not to mention slashing 800 jobs.

"The NBN Co chief left hundreds of Australian workers without a job in the middle of a pandemic and a national unemployment crisis – only to then throw money away like this."

The NBN Co announced in July that it would be cutting 800 jobs, and Perkins said many of these would be people who were responsible for essential network design and construction.

"We need the Federal Government to intervene and get the NBN right. The latest budget is supposedly all about jobs – so why are they not intervening to protect these vital jobs from the chopping block?" Perkins asked

"Instead of throwing money into Rue's exorbitant pay packet and his project blowouts, the reality is that we need to invest this money into an effective employment model. What we have at the moment is a government-endorsed pyramid scheme."

"It's not the workers' fault that they're not being offered the training, pay or hours sufficient to get the job done. Nor is it the customers' fault for being furious about delayed, failed and shonky installations.

"At each stage of the way, the 'delivery partners' get to wipe their hands clean of the mess they've made for customers, all the while pocketing cash and looking the other way. It's a system that is clearly failing customers, it's failing workers and it's failing taxpayers.

"The only winners are these middlemen who sit back and rake in the profit with no accountability for the mess they create.

"We're urging the government to throw the current pyramid model in the bin and replace it with a direct employment model like we have seen at Telstra."

More in this category: « Success of Telstra move will depend on freedom for units: Budde TPG's 'felix' sets the cat amongst the telco pigeons with an endless $35 voice, text and ‘up to’ 5Mbps speed offer »
Share News tips for the iTWire Journalists? Your tip will be anonymous