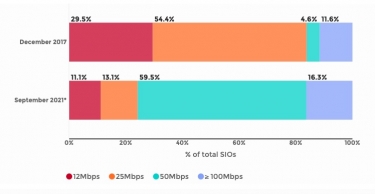 More than 8.5 million residential broadband services are now on the NBN, and over 75% of them are on high speed services of at least 50 Mbps, the ACCC’s latest NBN Wholesale Market Indicators Report reveals.

The report, which looks at the wholesale market for NBN services, shows that in the September 2021 quarter retail service providers bought access to about 450,000 more 50 Mbps and 100 Mbps services for residential and business customers. About 150,000 of these were for customers moving up from the entry level 12 Mbps and 25 Mbps speed tiers.

Very high speed services of over 100 Mbps, however, declined by around 195,000 services. This coincided with the scaling back of NBN Co’s ‘Focus on Fast’ promotion, which saw customers on promotional offers returning to their previous speed tiers, the ACCC concluded.

“The 50 Mbps and 100 Mbps speed tiers have been very popular with consumers recently, which is understandable as extended lockdowns in several states and territories have resulted in millions of people working and learning from home,” ACCC Commissioner Anna Brakey said.

“As temporary promotions wind down and retailers adjust pricing accordingly, we strongly encourage customers to think about their internet needs and pay for a higher speed tier only if their usage demands it.”

Aussie Broadband continued to make strong gains and accounted for almost one third of the wholesale services added in the September quarter, lifting its market share to 5.1%. Superloop also increased its share in the quarter, and after acquiring Exetel in August now has the sixth highest market share with 1.5%, the report shows.

“Smaller niche providers have injected competition into the market for broadband services and they now go some way to constraining the big four of Telstra, TPG, Optus and Vocus. Smaller providers give consumers real choice in the service quality and range of products to meet their needs,” Brakey said.

Retail service providers acquired more Connectivity Virtual Circuit (bandwidth) capacity over the September quarter, with total capacity acquired per user increasing from 2.74 Mbps in the June 2021 quarter to 2.82 Mbps. The amount of bandwidth acquired is one of the key factors that can impact customer experience, the ACCC stated.

“We are pleased to see that retail providers are continuing to acquire additional capacity so they can meet the demand from their customers,” Brakey said.

Wholesale market shares for Telstra, TPG and Vocus remained fairly stable in the September quarter. Optus lost market share (down 1.1%) as a result of Exetel’s customer base shifting to Superloop, the ACCC says.

Retail and wholesale service providers expanded their presence at NBN’s 121 Points of Interconnect (POIs), which are the physical locations where providers can connect to the NBN.

In the September quarter there were 13 or more retail and wholesale providers at 119 of the POIs (up from 99 POIs in the June quarter) and 14 or more at 110 POIs (up from 87 POIs in June). This offers more choice of internet providers to customers in more locations.

The ACCC set the number of POIs at 121 to provide a healthy market for a few transmission providers and incumbents. NBN had proposed just 14 POIs. The cost of connecting to a large number of POIs resulted in significant barriers to entry for possible new entrants. It also may have contributed to consolidation in the market with Vocus and TPG acquiring many of the second tier providers, as the high cost of connecting to large numbers of 121 POIs economically favoured scale providers.

For those interested in further information, including time series data, it is available on the ACCC website at NBN Wholesale Market Indicators Report.

This first appeared in the subscription newsletter CommsWire on 19 November 2021.

More in this category: « Telstra and Quantium to form new data and AI joint venture Gary Smith awarded 2021 Communications Ambassador at ACOMMS »
Share News tips for the iTWire Journalists? Your tip will be anonymous