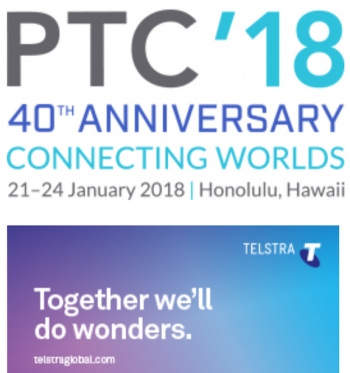 At the PTC conference today in Hawaii, Telstra announced that it "entered into agreements to invest in two new international subsea cable systems that will connect Hong Kong and the west coast of the United States".

Australia's biggest telco says its first investment will see Telstra "partner to build the new Hong Kong Americas (HKA) cable that will connect Hong Kong to the US. Telstra will invest in a half fibre pair."The announcement was made at the Pacific Telecommunications Council's (PTC) annual conference, which this year marks its 40th anniversary.

Telstra tells us that, once completed, the HKA cable "will help meet the increasing demand for connectivity between Greater China, ASEAN and the US', and is expected to be completed in 2020.

However, that's not the only cable Telstra is partnering to build – there's a second announcement that the company "had invested in capacity on the Pacific Light Cable Network (PLCN) that will also connect Hong Kong and the US. The investment will be the equivalent of 6 Terabits per second (Tbps)"."

The PLCN cable is expected to be completed in 2019.

As you can imagine, the two cables "will deliver lower latency due to being more direct routes between the US and Asia than the current Asia-America Gateway on which Telstra operates the most active capacity today".

David Burns, Telstra’s Group managing director of Global Services and International, said 'the investments reinforce Telstra’s network leadership in the Asia Pacific region and represent a significant boost for connectivity between the United States and Asia.'

Burns added: “As economic growth continues in China and South East Asia, so too does the demand for data. Together with the current AAG cable on which Telstra carries the most traffic today, these two investments will provide us with increased capacity across the important Hong Kong to US route, one of the fastest growing routes in the world for capacity demand.

“Our investment in capacity on PLCN and HKA will also provide our customers with greater resiliency due to bypassing areas prone to natural disasters and offering two direct, alternative paths to the AAG cable which connects South East Asia to the US west coast via Hong Kong, Guam and Hawaii.

“We will continue to invest to maintain our network leadership and support our international growth. This includes a commitment to investing in additional capacity on the Australia to US route,” Burns added.

Telstra reminds us these investments "follow the announcement in April last year that Telstra had entered into a consortium to build INDIGO, a new subsea cable system between Australia and South East Asia".