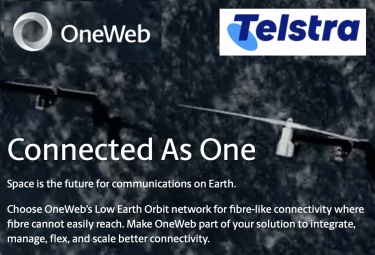 Australia's biggest telco, Telstra, and OneWeb, a low earth orbit (LEO) satellite communications company, have announced the signing of a Memorandum of Understanding (MoU) to explore new solutions for improved digital connectivity across Australia and the Asia Pacific region.

We're told the non-exclusive agreement brings together Telstra’s telecommunications expertise in Australia, and OneWeb’s satellite capability to deliver innovative connectivity in the future.

Telstra said the partnership complements its T25 ambition to grow and extend its network leadership position and boost mobile coverage across the country, in addition to being another key milestone for OneWeb’s path to global coverage later in 2022.

“We see lots of opportunities for our consumer, small business and enterprise customers using LEO satellite connectivity – from backhaul to back-up for resiliency, from IoT to supporting emergency services, from home broadband to supporting agritech.

“It also opens up opportunities in the wider Asia Pacific region alongside our existing and future operations.”

Neil Masterson, Chief Executive Officer at OneWeb said this is great news for communities and businesses across Australia and the Asia Pacific, who can now look forward to high-speed, low latency connectivity from Space.

“Together with Telstra, OneWeb’s global LEO network has the power to connect even the most remote parts of the region, and we look to realising our ambition to bringing connectivity to those hardest to reach.”

Telstra reminds us its mobile network currently reaches 99.5% of the population and covers 1 million square kilometres, more than any other Australian mobile provider.

Meanwhile, we're also reminded OneWeb is making significant progress in building its constellation and currently has 428 satellites in low earth orbit, representing more than two thirds of its planned fleet, delivering connectivity to customers in remote regions of Alaska, Canada, and the North Sea. Launches will continue during 2022 to enable the company to offer commercial connectivity services globally later this year.

OneWeb and Telstra say they will work together "over the coming months" to finalise the detailed scope of the agreement.

More in this category: « Optus offers free calls to Ukraine for two weeks for postpaid and home plan consumer customers Ericsson did not meet terms of deal over Iraq corruption claims: DoJ »
Share News tips for the iTWire Journalists? Your tip will be anonymous