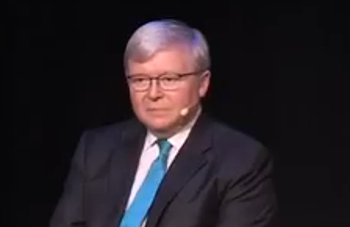 Former Australian prime minister Kevin Rudd claims the Coalition Government changed its NBN policy to ensure "a sub-standard network" due to its "cosy relationship" with the Rupert Murdoch-owned News Corporation.

Rudd told The Saturday Paper in an interview that he was surprised that this had not been more comprehensively debated and inquired about.

Work on the national broadband network was begun in 2009 under the Labor Government that Rudd led, with a policy of having fibre supplied to 93% of premises. The balance was to be made up by fixed wireless and satellite connections, mainly due to accessibility issues.

But in 2013, when the Coalition Government headed by Tony Abbott took power, it changed the technologies. Added were fibre-to-the-node and HFC cable. Additionally, other methods of using fibre with varying lengths of copper forming the lead-in have also been employed.

The Labor plan was said to be too costly. But Rudd rejected this argument, and alleged that it was News Corp's opposition to the plan that was responsible for the changes. A fast network would have boosted subscribers to Netflix and competitors to the Foxtel pay network in which News Corp has a stake, he claimed.

Complaints about the NBN, which is being built by a government-owned entity known as NBN Co, have soared this year, showing a sharp rise.

“If ever there was a case for a royal commission in Australia on the waste of public funds and the unseemly relationship between the Liberal Party on the one hand and the Murdoch party on the other in the destruction of the NBN model for Australia, this is it," Rudd told the paper.

“People need to look very carefully at why they’ve ended up with such a dog of an NBN in Australia, which is a laughing stock of the developed world, whereas when we launched it, we were in a position to lead the world. This is a genuine national disgrace, scandal and tragedy.”

"The only thing he can reflect on is a failed project. The Turnbull Government has turned it around and is delivering the NBN to millions of homes and businesses across the country at $30 billion less cost and six to eight years sooner than Labor. Thanks to our policy, all Australian homes and businesses will have fast broadband by 2020," Fifield said.

And News Corp told the newspaper: “Mr Rudd is entitled to his opinions. It is a role of the media to scrutinise governments, it is what defines a democracy, and we stand by our role in doing that.”

The interview also canvassed Rudd's views on a range of other issues.