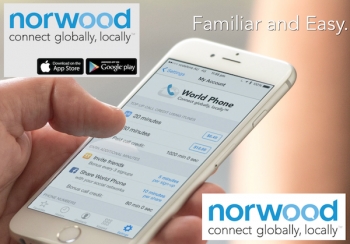 Selected as a finalist for the ‘most disruptive technology’ category, ‘Sharing Economy’ telco Norwood has announced some major updates to its World Phone, Corona and other platforms.

Highlights of these enhancements and developments include:

Now, these additional enhancements have been "fully implemented into the Android version of the World Phone App".

Together with the rollout of these new enhancements, Norwood says it will "implement a number of additional improvements to the cloud-based infrastructure for World Credit to provide the improved support required for the Android platform.’

These updates are planned to be launched in June, which will bring both platform versions of World Phone to the same feature level.

Norwood also advises that "meaningful discussions with a range of mobile operators, and other interested groups, remain underway canvassing the possibility of material carrier licensing or other distribution arrangements for Norwood's platform of Apps including World Phone, World Message and World Wi-Fi.’

While not all of these discussions will ultimately reach a successful outcome, Norwood says it is ‘confident that a number will progress to agreements leading to material revenues for Norwood".

With these potentially material discussions underway, and with World Phone now having proven itself over 4 million plus downloads and tens of millions of calling minutes, Norwood says it has "reduced the level of digital marketing spend on acquiring direct World Phone customers".

The company says this is "in anticipation of potentially opening an additional customer acquisition channel via the mobile operators' customer base, to work alongside direct digital marketing. Total revenue earned per user continues to increase, across the installed base, driven by improvements in monetisation strategies targeting existing downloaders of the World Phone App".

New: CORONA support to be added within World Phone. Work Phone to be deprecated.

Norwood reports that "rollout of the new CORONA Cloud capabilities has been delayed somewhat, in large part due to an earlier internal decision to retire the original CORONA Work Phone App, replacing it with a new, "unified" World Phone App to service corporate CORONA customers, as well as existing consumer end-users.’

Norwood says it has "invested a significant amount of additional development effort to modify World Phone so that it can also support CORONA and CORONA Cloud implementations in a seamless manner. The end result will be a single App, World Phone V1.2, which will be able to operate effortlessly in either a corporate or a personal use case context, supporting an elegant user interface to enable the end-user to switch easily between the two modes. More details World Phone V1.2 will be announced when it is released".

Further, Norwood advises that ‘both of these products, as well as World Phone V1.2, have now entered closed external testing, following demonstrations to potential customers. Feedback to date has been extremely positive and the company is convinced of the merits, having selected this somewhat more complicated and longer development path, of the simpler and more elegant solution that a single App solution represents.’

Praising the reflection of Norwood’s "ambitious scope and vision", Norwood has hailed the selection of its World Wi-Fi app ‘as a finalist in the WAITTA (WA Information Technology and Telecommunications Information Alliance) INCITE awards, under the "Most Disruptive Technology" category.’

Norwood’s shared economy Telco platform, EUROPA, that powers World Phone has also been selected as a finalist in the "Most Effective Platform" category.

Award winners will be announced on 24 June.

WAITTA will also choose the winners and merit recipients who will represent Western Australia in the National iAwards, held in Melbourne in September 2016. Both CORONA and World Phone are previous National iAward winners, which Norwood says reflects ‘the strong external expert validation for Norwood's products.’

The company states that "development of both World Message and World Wi-Fi remains on track for further product details to be announced in the current quarter".

Norwood explains that "World Message combines the best of SMS with the best of traditional App- to-App messaging, with deep World Phone integration, whilst World Wi-Fi lets you seamlessly get online at many millions of Wi-Fi hotspots globally, effortlessly and cost-effectively.

"World Message and World Wi-Fi will also benefit from the corporate use case functionality being delivered with World Phone V1.2, with the Company placing support for both Apps on its CORONA Cloud roadmap as a future upgrade."

Norwood Systems' CEO and Founder, Paul Ostergaard, commented: "Acknowledging the ambitious R&D agenda that we laid out in February this year, our development team's work has been progressing well on planned new features, enhancements and core development for our suite of products, including World Phone, World Message, World Wi-Fi and CORONA, and I am pleased with the progress that this team is making across all these product and service areas.

"Our Over-the-Top Apps and platforms address a number of critical and valuable market opportunities to deliver state-of-the-art communications services to consumers, businesses and Telcos, ultimately backed by our vision of becoming a world leading vendor in 'sharing economy' telecommunications service platforms.

"Discussions with potential mobile operator partners are also progressing well. This is an important key market for Norwood, which we identified last year, and we believe we are so far one of the first vendors to look to provide mobile operators with a full suite of advanced end-user Apps, including World Phone, World Wi-Fi and World Message, as well as the supporting federated EUROPA platform, that they will need to compete effectively with other Over-the-Top players that are eating away at their core revenue base.

"Serving the global mobile carrier community will sit very well alongside our existing direct consumer acquisition channels for World Phone, and our business-oriented offering in CORONA."

More in this category: « Turnbull promises $60 million for blackspot program if re-elected Vocalcom comes to Australia via Quality Connex »
Share News tips for the iTWire Journalists? Your tip will be anonymous