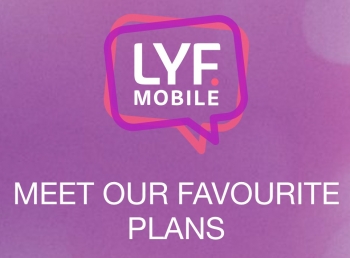 Promising to be "more than just a phone service" thanks to an emphasis on community engagement and giving back, LYF Mobile still promises fast speeds, affordable prices, online simplicity and a millennial focus - is it time to Choose Lyf?

The newest MVNO (mobile virtual network operator) to be brought to life on the Telstra network is LYF Mobile, promising the usual "fast connections at competitive prices" that every MVNO, let alone telco, says they offer.

However, LYF Mobile says it will "target Australia's millennial population", and promises to be "more than just your average telco by placing emphasis on community engagement and giving back".

Proudly boasting that is "running off one of Australia’s most popular networks", it launched yesterday, which was unfortunate given the Telstra mobile network outage, but these things happen.

Hopefully the millennials that would have tried connecting to LYF Mobile yesterday weren't of the snowflake kind and would have understood that outages happen - even in a millennial world.

In any case, with LYF Mobile offering five different 4G plans starting "as low as $20", one has to immediately wonder how serious LYF is at its low cost commitment, and whether cash-strapped millennials would rather cash staying in their pockets instead of being diverted to community engagement and giving back.

That's just a comparison with another MNVO on the Telstra network - I haven't taken the time to compare with Boost, also on Telstra, or MVNOs such as Amaysim, Vaya and OVO on Optus, Kogan Mobile on Vodafone and many others out there, including the new Catch Connect MVNO. I also don't see any data-specific plans on Lyf, unlike Aldi, OVO, Kogan, Amaysim and others.

Has Lyf Mobile introduced a new type of pre-paid lock-in?

There's also something new I've never seen before with a pre-paid provider, and that is a type of lock-in that costs $50. As you'll see in some of the detail below, we're told that Lyf Mobile's "3 month sign up is actually a month-by-month. Customer can leave LYF whenever they feel. There is just a $50 fee involved if they decide to leave before 3 months. Once that period is over they can leave whenever they like at no cost."

Now, it's only fair that we do these kinds of comparisons, and of course we're not the only ones to do so - sites such as Whistleout make this their businesses, while Finder not only does this for telcos but seemingly for every aspect of your life.

And this is where Lyf Mobile will have to become more competitive, because while it is very nice to give back to the community, millennials can just as easily do this directly with the cash saved in their own pockets, rather than letting some other organisation do this for them.

Lyf also proudly boasts that it is a "solely online company, making it easy for consumers to sign up to the service in just a few quick clicks via its website rather than having to physically go in store or wait over the phone" - but plenty of other players can say the same.

OVO is additionally competitive through its media offerings for example, and has a very lean physical operation too, with everything done online. I don't see any physical Amaysim, Vaya or Kogan Mobile stores, either, so being online, in 2018, is no longer a true competitive advantage, but merely table stakes.

And, while Lyf says it enables customers to tailor packages, selecting features like international roaming and extra data depending on their needs, its clear that companies like Aldi just offer some of these "extras" as standard. Why pay more if it's already included?

Note that Aldi does not offer international roaming as standard, and that the most competitive mobile roaming provider is Vodafone.

Starting a business is great - a bold move from its founder, Todd Scott.

Now look, I don't want to be down on Lyf Mobile. Its founder, Todd Scott, is doing something I wish I was doing - running an MVNO and an actual business, rather than "merely" being a writer. I imagine Todd Scott is earning much more money than I am, taking a lot more risk, and has to roll with the punches and brickbats while hoping a few bouquets and actual customers come his way, too.

Of the launch, Scott said: "We developed this MVNO so young Aussies who are time poor and or on a budget can easily stay connected and not break their banks.

“It’s a company run by millennials, for millennials where we listen to our customers’ needs and thoughts on a range of community issues. LYF Mobile is stepping away from standard telco offerings to be a little bit different and offer a little bit more than just a great phone connection and we are thrilled to launch this across the nation.”

And, in a clear nod to wanting to stay different, Lyf says that "over the coming months", it will be "announcing some exciting partnerships with local and national organisations which look to encourage young Aussies to talk about issues affecting their own lives and always stay connected to their family and friends."

The company also promises "an Australian 24/7 support line based in Melbourne to ensure they are connected and happy with their service at all times."

So, what is some more of the background behind Lyf Mobile shared with me by its hardworking PR people?

We're told that founder Todd Scott"saw the gap in the market and more importantly what the 'millennial focused' telco is offering to Aussies", a millennial focused telco run by millennials, as was described above in Scott's own words.

The MVNO was "created in direct response to what millennials look for in a telco after having a discussion with some of his mates a dinner party one night. Not one of his friends was happy with their telco and he thought he could do something to fix it!"

Two years later, after plenty of research and developing business plans, LYF Mobile is ready to launch across the nation, promising "a cheap, fast service with minimal contracts, Australian based customer service and a social conscience. It's a little bit different offering a little bit more."

Here are some claimed key differentiators between LYF Mobile and other 'similar' MVNO offerings in Australia as provided by Lyf Mobile:

More in this category: « Telstra says service 'back to normal levels', but no word on why it happened Software fault triggered Telstra mobile network outage »
Share News tips for the iTWire Journalists? Your tip will be anonymous