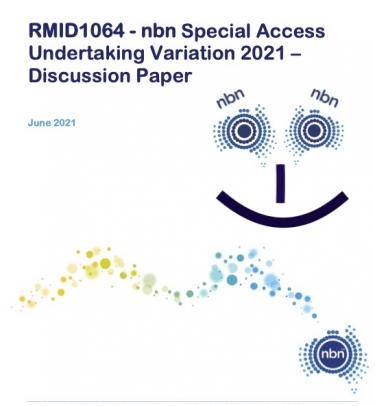 NBN Co has realised a discussion paper to industry on proposed changes to the Special Access Undertaking (SAU) lodged with the ACCC. The SAU sets out the framework that governs the terms on which the company supplies services to the industry. The proposed variation includes options to change to pricing with only the Access Virtual Circuit (AVC)component, dropping the contraversial Connectivity Virtual Circuit (CVC) component. It also adds all the current Governments Multi-Technology Mix access technologies, such as Fibre-to-the-Building, Node, Curb (FTTB, FTTN, FTTC) and Hybrid Fibre Coax (HFC).

NBN Co released its Special Access Undertaking (SAU) Variation 2021 Discussion Paper to commence its engagement with industry and consumer advocacy groups on key changes to the SAU it proposes to submit to the Australian Competition and Consumer Commission (ACCC) later this year.

The proposed changes in the Discussion Paper include updating the SAU to expand its scope to cover the network technologies not launched when the SAU was accepted in 2013, as well as specifying options to evolve wholesale broadband pricing for the future to address feedback from the industry.

The proposals set out in the Discussion Paper and the feedback from internet retailers will inform discussions at the ACCC’s recently announced SAU industry round table forum, which is scheduled for 18 June.

NBN Co Chief Legal and Regulatory Officer, Jane van Beelen, said:“Today marks an important first step in the SAU variation process, with NBN Co interested in working constructively with the telecommunications industry and the ACCC to deliver positive changes to the regulatory and pricing framework for the future.

“We are approaching this discussion with an open mind and look forward to working collaboratively with the industry and regulator to create a framework that addresses the needs of the industry, NBN Co and, importantly, delivers great customer outcomes. Through this SAU process, we also hope to progress long-term pricing reform more quickly”.

Responding to industry feedback for greater cost certainty, simplicity and value, NBN Co is proposing three long term TC-4 pricing options for consideration, of which two involve Access Virtual Circuit (AVC)-only wholesale pricing on some or all fixed-line and fixed wireless speed tiers. One option involves flat rate AVC Only pricing on all speed tiers, while the other proposes the removal of the Connectivity Virtual Circuit (CVC) charges for wholesale speed tiers of 100 Mbps and above. The third option involves a 25 per cent reduction in the CVC overage rate from $8 to $6 per Mbps. Each of these options involves an element of rebalancing of the total charges faced by internet retailers from variable charges to fixed charges.

All three options substantially address many of the concerns that have been expressed by retailers and provide a pathway forward to delivering a sustainable long-term pricing framework that supports the industry and meets the future digital needs of Australians.

While NBN Co are aware of some retailers’ preference for a flat AVC-only construct, NBN Co believes careful consideration needs to be given to the potential impact on affordability of the broadband network for low usage customers, equitable cost recovery between consumer segments, take up of nbn services, retail competition and consumer choice.

To help understand these impacts, NBN Co commissioned Accenture to conduct research on the likely outcomes of a flat AVC-only construct. The research showed approximately 1.4 million customers on low data usage plans will likely face a significant retail price rise of approximately $120 a year, on average, as retailers transition these consumers onto uncapped data plans. NBN Co believes that this research is one input into helping to inform the best pricing approach, and is providing the research to help inform industry and ACCC feedback.

In conjunction with the long-term pricing proposals, NBN Co has proposed approaches to the SAU price controls, acknowledging that pricing options outlined in the Discussion Paper restrict or entirely remove nbn’s ability to recover the increasing costs of higher bandwidth usage, and hence network investment, through usage-based charges. The proposed new long-term SAU price controls would continue to provide pricing predictability for the industry, while still enabling sustainable investment in the network, as usage and customer needs increase.

Following the pricing consultation, NBN Co will seek to include the result of the consultation as a regulated offer under the SAU, potentially replacing the existing ‘Basic’ AVC/CVC product components for TC-4, which would address concerns with nbn’s use of long-term bundles discounts to establish the charges for its TC-4 services.

NBN Co Executive General Manager Commercial, Ken Walliss, https://www.linkedin.com/in/kenwalliss/ said: “We believe the pricing options presented for discussion represent a balanced approach to meeting the objectives set out in this paper. The various pricing options include ones designed to reduce retailers’ commercial risk of exposure to higher than expected usage growth; support the continuation of cheaper data capped retail plans and promote a competitive environment that enables retailers to differentiate their respective offerings from their peers.

“In evaluating a final pricing option, key considerations for NBN Co will be promoting strong outcomes for customers throughout Australia, creating the environment for robust retail competition and opportunities to support all customer groups as much as possible, and maintaining the company’s ability to earn a reasonable return on its investment to enable continued efficient investment in the network.

“We look forward to progressing these important pricing discussions with industry and the ACCC through the SAU process”.

NBN Co’s SAU and pricing consultation process will run in conjunction with the ACCC’s round table forum. NBN Co will continue to engage with the industry and the ACCC after the forum, seeking feedback on their proposals, as well as any other matters retailers wish to raise, with a view to developing a variation to the SAU that could be lodged with the regulator in the fourth quarter of the 2021 calendar year.

It will be interesting to see how the industry reacts to this discussion paper.

More in this category: « Event-driven churn-reduction models can save telcos millions Over the Wire builds SuperCore to enhance data network speeds and capacity »
Share News tips for the iTWire Journalists? Your tip will be anonymous