NBN delivers access to Ultrafast internet to a further 160,000 homes and businesses 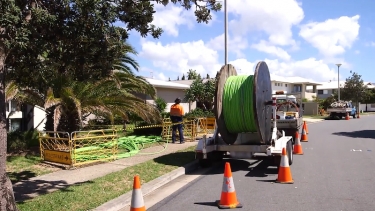 NBN Co is inviting customers living and working in around 160,000 premises currently served by Fibre to the Curb (FTTC) in New South Wales, Victoria and South Australia to upgrade to Fibre to the Premises (FTTP).

This is the first in a series of tranches that will extend eligibility to approximately 115,000 additional premises per month in New South Wales, the Australian Capital Territory, Victoria, South Australia, Queensland and Western Australia, to make almost one million premises currently served by FTTC able to access nbn Home Ultrafast by the end of this year. By the end of next year, approximately 1.5 million customers currently able to access the nbn network via FTTC will be able to upgrade to FTTP and enjoy access to the highest speeds available on the network.

To find out if their premises may be eligible to upgrade from FTTC to FTTP, customers are invited to register for updates at nbn.com.au/fttpupgrade. The website includes links to participating retailers.

Once customers order an nbn Home Superfast or nbn Home Ultrafast speed tier-based plan from a participating retailer, NBN Co will design and construct the fibre lead-ins to the premises at no up-front cost to the retailer. Most premises currently served by FTTC can already attain wholesale download speeds of up to 100 Mbps.

NBN Co chief customer officer Brad Whitcomb said, "Our aim is to deliver access to our highest nbn Home Ultrafast wholesale speed tier with wholesale download speeds of 500 Mbps to close to one Gbps to premises currently served by our FTTC network. This is another step toward extending these speeds to more and more Australians across our fixed-line technologies, including FTTN and HFC."

The first 157,000 FTTC premises in parts of the following suburbs and towns are now eligible to upgrade to FTTP:

More in this category: « TPG says Telstra/TPG network sharing deal will benefit over five million customers overnight Commpete says Telstra and TPG Merger is not in the strategic interests of the Australian Public »
Share News tips for the iTWire Journalists? Your tip will be anonymous