Mobile virtual network operator and Internet provider Mate wants to be your best mate with a high value mobile plan, using the Telstra network, with great inclusions and low prices that will surely be very tempting to a lot of smartphone users.

Mate. The company in an Australian owned Internet, NBN and mobile virrtual network operator of note, and it could very easily become your best Mate for quality, service and pricing!

I previously video interviewed Mate GM Mark Fazio nearly a year ago, and learned what a great Internet and mobile provider the company is, with really competitive pricing, "mates rates" on various goods and services, Australian customer service and more, and I've been happy to follow the company's impressive progress.

Now comes news of Mate's latest date with destiny, with the launch of an excellent value postpaid 5G plan, with no contracts, continuing its track record of providing top-notch service at a fantastic price for its Aussie customers.

Even better still, this is all for the low-cost introductory offer of $40 per month – and when Mate says it’s possibly the best in the market overall, it certainly will be hard to beat. 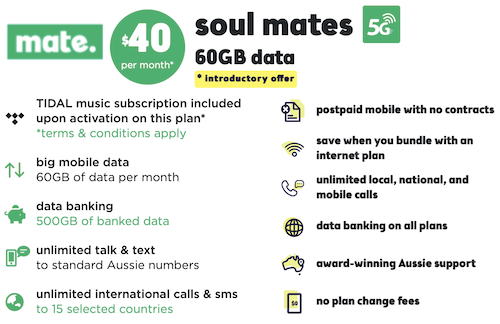 It reminds me of when Amaysim, now owned by Optus, launched what was a game changing plan a decade ago, when it offered unlimited calls and text to Australian numbers, and a then whopping 4GB. There were no included calls to overseas numbers, there were no data bank options, but at the time, it was a great deal.

Fast forward to 2022, and we have the modern equivalent. The Telstra Wholesale cap on 5G speeds is 250Mbps, and while those directly on the Telstra network can get faster 5G speeds, a 250Mbps cap is still much faster than the 4G peak speed of 100Mbps, so those with a 5G-capable phone but who have been stuck on a 4G plan will certainly feel the difference.

Even those on a 5G plan directly with one of the three major carriers is unlikely to notice any differences.

As Mate notes, "5G also provides Aussies with greater bandwidth, so users can look forward to taking advantage of their data. From seamless 4K video calls to being able to download a movie in seconds, the 5G plan offers an exceptionally high-performance experience no matter what your mobile needs are."

Mark Fazio, Co-CEO of MATE, noted his pleasure at Mate being able to continue bringing its unique brand of local telco services at fantastic prices to the community, and stated: "The 5G mobile network gives Australians the speed and performance they’re looking for with even less lag time than ever before. We’re thrilled to be able to offer Aussie consumers this great result at a price that’s more affordable than ever.:

Mate is also proud to note its use of the Telstra Wholesale network, which uses parts of Telstra’s 5G, 4G and 3G mobile networks in providing services to customers.

Mark concludes: "We’ve been apart for too long. Our new soul mates 5G plan will help families and friends stay in touch whether they’re here in Australia or overseas. And it’s not going to cost them an arm and leg to do that. With the current economic situation, we feel good about that."

Now, I had some questions, which included what the time limit was on the introductory pricing, whether the current 100GB 4G plan will move to 5G at some point, and whether Mate's service allowed users to have the same number added to their Apple Watch, which is something that is only reserved for the main carriers themselves.

The answers I received were as follows:

"The introductory price does not currently have an end date and the team doesn't have a set price that it will move to. Any customers on the $40 per month plan will continue to pay $40 even if the offer ends.

"4G and 5G Plans are separate and the 100GB won’t become 5G. They may at some point have a 100GB 5G plan however they have no set date for this. In the future, all plans will be 5G capable.

"The 5G plan is not an eSIM plan. They are looking at plan and bundle options around eSim which would enable devices such as smartwatches and tablets to have a data plan without a physical SIM card. This would also allow eligible handsets to have a second phone number via eSim in addition to a physical SIM."

So, if you have an Apple Watch and want it to have the same number as your iPhone, you'll be forced to stick with Telstra, Optus or Vodafone direct, and you can't connect the Mate 5G service to an eSIM plan.

Hopefully, those are just limitations for now, and will one day be removed, but they're things currently beyond Mate's control.

The plan puts up a great fight against Boost Mobile, another great MVNO on the Telstra network, and the full 4G network at that, which would be greater coverage than Mate, but for most living in the cities, extra regional coverage won't make much of a difference. Boost also doesn't yet offer 5G.

Another difference is that Boost lets you call any country, with a limit of 300 minutes of international calls and texts, as opposed to full unlimited to the 15 countries listed above its Mate.

Boost doesn't offer data banking either, which is certainly a consideration for some.

So, Mate's new 5G mobile plan is definitely competitive, and an excellent deal for those who want access to the Telstra network without having to pay Telstra prices, while data banking up to a whopping 500GB.