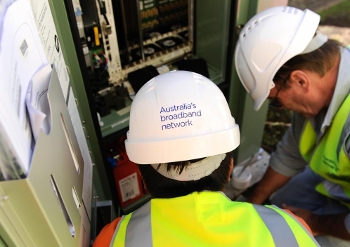 Two members of the Labor Party's shadow cabinet have called on Prime Minister Malcolm Turnbull to provide details about how the anticipated lack of income from the national broadband network will affect the federal budget.

Finance spokesman Jim Chalmers and communications spokesperson Michelle Rowland issued a statement asking Turnbull to "release advice about how his mishandling of the NBN rollout could smash the budget by blowing out deficits and pushing up debt even higher".

The pair cited an article in The Australian newspaper which claimed the Liberal Party had been told officially that the multi-technology mix NBN was exposing the budget to billions in writedowns.

Saying the company was getting $43 per month from RSPs per connection and needed $52 to break even, Morrow added: "We, NBN and the board, are betting that future applications are going to bring more value into homes, that they are going to need more bandwidth or more data and that the retail service providers will pay us more."

Turnbull also criticised the network the same day, calling it a "calamitous train wreck" and blaming the Labor Party for the mess.

"No-one would've wanted to start from where Labor left us, so we have done the best we can getting that project on track," Turnbull said.

But Chalmers and Rowland said it was Turnbull who had "trashed the NBN business model so badly that he risks pushing record debt up even higher on his watch".

They said net debt was predicted to hit record highs over the next two years and gross debt had crashed through the half-a-trillion-dollar mark for the first time.

"Turnbull needs to immediately release the full advice so Australians can see just how bad his NBN bungles have jeopardised the budget," the Labor duo said.

"We also reiterate calls for the government to immediately endorse Recommendation 2 of the NBN Joint Standing Committee, which sought an independent audit of the assumptions underpinning the financial forecasts contained in the 2018 NBN Corporate Plan.

"If Turnbull really stands behind his multi-technology mix, then he needs to show (that) the numbers behind it stack up too."

More in this category: « NBN Co plans to use G.fast technology for rollout in 2018 75% of consumers would buy mobile services from Amazon, Paypal and Netflix: choosing the red pill? »
Share News tips for the iTWire Journalists? Your tip will be anonymous