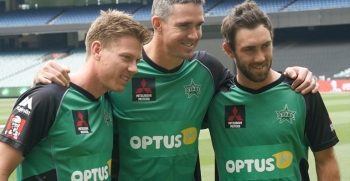 Optus has stepped in to replace troubled electronics retailer Dick Smith as the Melbourne Stars’ Principal Partner and the Club’s Official Mobile Media Partner for the remainder of the Big Bash League (BBL) Twenty20 cricket season.

Under a new sponsorship deal announced just after the Melbourne Stars drew a record breaking 80,883 to the MCG, Optus now retains branding assets including a prominent logo on playing jersey and training gear, signage and activation opportunities at matches plus player appearances to support the partnership.

“The Melbourne Stars is thrilled to announce Optus as our Principal Partner and Official Mobile Media Partner for the next two and a half seasons.

“We see this long term partnership as one of the most significant Club sponsorship deals in BBL history and we thank Optus for actioning this opportunity to allow the organisations to begin leveraging the partnership this season,” Cooper said.

Ben White, Acting Managing Director of Marketing and Product at Optus said, “It’s great to start the year with yet another exciting sports partnership. As the Principal Partner of the Melbourne Stars, Optus remains committed to forming partnerships that align with our business values and deliver unique experiences for our customers.

“Eligible Optus customers will also be able to stream Big Bash League matches live via their Cricket Australia Live Pass, thanks to our existing partnership with Cricket Australia. It’s another way that Optus is bringing premium entertainment closer to our customers.”

Melbourne Stars president Eddie McGuire said: “It is a tribute to the administrations from both organisations that this mutually beneficial partnership was able to be actioned. We look forward to developing this relationship further over the next two seasons for the benefit of Optus customers and Melbourne Stars Members and fans.”
Read 3426 times

More in this category: « Telstra fires up mobile capacity for Victorian fire fighters BT snares cloud services contracts with EU »
Share News tips for the iTWire Journalists? Your tip will be anonymous