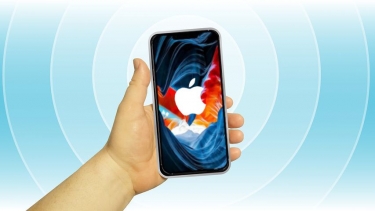 With smartphone shipments in total for Q4 2021 growing by just 1% in an era of supply chain issues and chip shortages, Apple has regained the top spot thanks to the iPhone 13 range, iOS and its unparalleled ecosystem of apps, accessories and hardware companions, such as Apple Watch, AirPods and more.

When it comes to having the most integrated, sophisticated and mature ecosystem of devices, apps, services and accessories, Apple is the No.1 standout digital player.

Samsung has fought hard to be a clear second, and also has an incredible ecosystem of phones, tablets, watches, computers, wireless ear pods, and a rang of connected home appliances that Samsung manufactures across a range of price points that it is promoting and advertising ardently.

Huawei also made great strides with its ecosystem of hardware and apps and also has a well integrated ecosystem, but the company has suffered in Western markets by not having the same Android experience as virtually every other smartphone maker, having been forced to go with its own HarmonyOS - which can run a whole stack of Android apps, but without the effortless simplicity of the Google Play experience.

Apple's strength sees it command the largest individual market share, with what are reported to be the highest margins, giving Apple the profits and capital it needs to keep Apple on its never ending cycle of improvement.

However, during 2021, Samsung was in top spot with Xiaomi at No.2, but the iPhone 13 range has proven formidable, even in the face of Samsung's impressive folding range, the new competition from Google's Pixel 6 range, and models from brands not mentioned, including Motorola, Nokia, Realme and others.

Of course, the supply chain issues, logistics challenges and chip shortages affected all those brands, too, as they affected everyone, but for Apple to regain the top spot in the Q4 timeframe, which saw my iPhone 13 Pro Max from my local carrier delayed by two months, Apple's strength is clear, despite the other 78% of the market belonging to various flavours of Android.

Oppo and Vivo are separate brands but owned by parent company BKK, so at a combined 17% is larger than Xiaomi, but as separate brands, they compete as hard as they can in their respective price points, with Oppo certainly going for high-end phones while hitting mid and upper-mid range pricing, all the way down to the cheapest models.

Canayls states that Apple accounted for 22% of worldwide smartphone shipments in Q4 2021, thanks to strong demand for the iPhone 13.

Overall, however, Canalys notes "shipments for the quarter grew just 1%, as vendors faced supply chain problems and a resurgence in COVID-19 cases. Samsung took second place, down from the top spot in Q3 2021, with a market share of 20%. Xiaomi maintained its third-place position with a 12% share. OPPO and vivo completed the top five with 9% and 8% shares respectively."

Canalys Analyst Sanyam Chaurasia said: "Apple is back at the top of the smartphone market after three quarters, driven by a stellar performance from the iPhone 13.

“Apple saw unprecedented iPhone performance in Mainland China, with aggressive pricing for its flagship devices keeping the value proposition strong. Apple’s supply chain is starting to recover, but it was still forced to cut production in Q4 amid shortages of key components and could not make enough iPhones to meet demand.

"In prioritised markets, it maintained adequate delivery times, but in some markets its customers had to wait to get their hands on the latest iPhones.”

"Smartphone brands are already innovating to make the most of their circumstances, tweaking device specs in response to available materials, approaching emerging chipmakers to secure new sources for ICs, focusing product lines on the best-selling models and staggering new product releases.

"These practices lend an advantage to larger brands, and they are set to stay for the short term, as bottlenecks will not ease until the second half of 2022.” 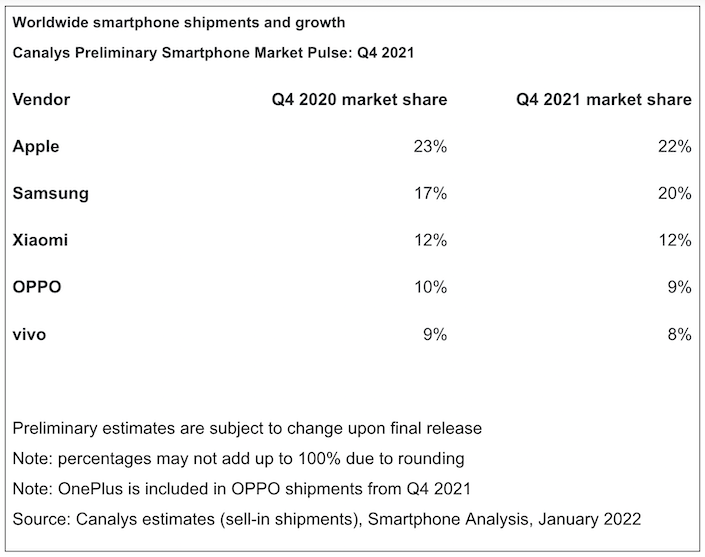