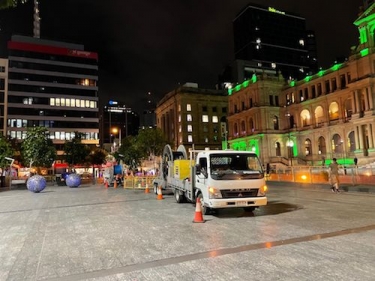 Aussie Broadband says it is on track with the build of its dark fibre network in Queensland, having connected 14 out of 22 NBN Points of Interconnect (POIs) and 4 data centres as part of the Queensland leg of its national fibre project.

Aussie Broadband said that stage 1, which loops around Brisbane’s CBD, and the second loop around Woolloongabba and South Brisbane, is already completed.

Chief technology officer John Reisinger said he was delighted with the build progress in Queensland. “We’re at the tail end of our Queensland fibre build and we’re on track to having that leg of the build completed on schedule and within budget,” said Reisinger.

“Our fibre is in the ground in Gold Coast and Brisbane’s local government areas, and we’re working our way to Ipswich and Petrie.

“We’ve rolled out multiple 100G links to the POIs that we have connected. We also have a 10-gigabit retail option available for businesses on a managed fibre service in the build radius.

“The build has seen us strategically splicing multiple cores towards data centres and customer areas to speed up provisioning when an order is placed. This will significantly reduce delivery time frames, resulting in quicker connections."

The four data centres connected in Brisbane consist of two at NextDC, and one each at Over the Wire and Interactive. The company says it has connected a fully diverse network to these data centres, meaning multiple shorter paths that will reduce latency for customers.

Reisinger said the network is being built using 720 core optic fibre manufactured in Australia by Prysmian.

“We have just over 236km of Aussie fibre already laid and connected to POIs and data centres throughout Queensland. Our fibre is located in strategic CBD locations throughout Brisbane and Gold Coast, which will make it easier to connect to business customers.”

Netcom Fibre Optics director Bryan Cameron said he was delighted to partner with Aussie to provide high-performing connectivity to Queensland.

“It has been an exciting and rewarding experience for us to be a part of this venture, working with Aussie to achieve a new highspeed fibre network. We really feel part of the team and have achieved so much together over the last 12 months,” said Cameron.