The following article was penned by former ABC Technology Editor Nick Ross in the lead up to the 2013 Federal Election. The article was held back from publication by the ABC ostensibly due to political pressure – the background to this can be read here.

There are many issues with the Coalition’s NBN alternative figures, but a prominent erroneous claim that keeps cropping up is that it costs more to connect to the NBN than the Coalition’s alternative. This is misleading and wrong.

On Monday, Malcolm Turnbull published answers to some Frequently Asked Questions. Top of the List was:-

How much will the internet cost under the Coalition?

The Coalition is absolutely committed to affordable broadband and telephone prices. One of our key concerns with Labor’s NBN is that it is too costly. These costs will be recovered from users, which can only mean higher prices. . Under the Coalition, more prudent and efficient investment keeps prices lower, and means the average user will save up to $300 a year on their broadband bills compared to under Labor.

This matches tables, graphs, literature and claims that have appeared on Liberal Party web pages and unchallenged in mainstream media. The following was in the press release that was circulated at the policy’s launch and is also on Tony Abbott’s personal webpage.

The Coalition claims that NBN costs $50 to connect to now and will cost $90 by 2021. But this isn’t the cost of connection. It’s a figure called Average Revenue Per User (ARPU).

The actual wholesale cost of connection to the NBN (the figure that NBNco charges ISPs to connect to the network) for a 12 /1 plan is $24 per month (fixed until 2017). It drops to around $20 by 2021. As such, the lowest actual price people can pay an ISP for an NBN internet plan right now is just $30 per month. (https://nbncompared.com.au/)

That’s not just better value than existing copper-based internet plans, it’s significantly cheaper than the Coalition’s own cheapest projections which start at $50 per month.

Why would people pay more?

The projected revenue per user for NBNco is based upon customers – both public AND business paying for additional services.

For instance, business-grade services naturally cost more because they come with guaranteed Service Level Agreements and support. Small Business plans have already been launched while enterprise-level plans launch in 2015.

Other services also include multiple business phone lines – at present NBNco doesn’t charge any extra for connection to phone services. It provides a small amount of special, priority bandwidth (called “Traffic Class 1”), for free to ensure that voice traffic gets prioritised for smoothness and clarity. The likes of businesses and health-related applications can buy more “Traffic Class 1” abilities as needed.

Multicast services (which revolutionise television distribution) will also be available at an additional cost. But generally it is expected that people will pay more for higher speeds and data allowances as the number of internet-enabled devices in each home increases and file sizes get larger as per global and local forecasts.

An example of an industry already being held back by the copper network is television. All of the current television manufacturers have stated that they are designing televisions which are focused on displaying video from the internet rather than broadcast television. Also, Ultra High Definition televisions will become increasingly common over the coming years and the only practical way to distribute content for them is high-speed, fibre-based broadband. More on that, here.

Ultimately, the only reason anyone might have a higher bill in 2021 is if they choose to pay for these additional services.

Hypothetically, if NBNco raised prices at the maximum level allowed by its Special Access Undertaking – which is mandated by the ACCC – the result is still lower prices in real terms. 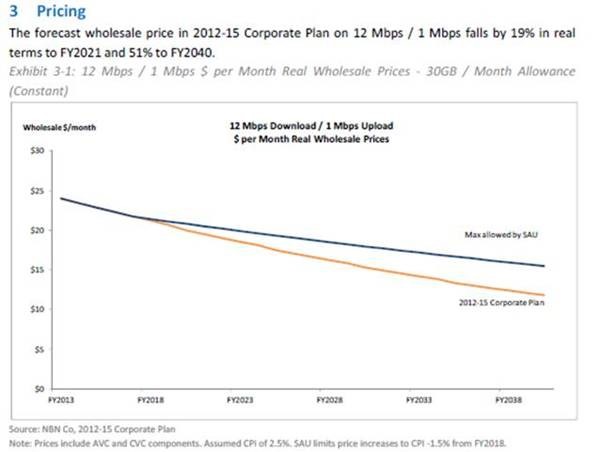 What if the Coalition changes everything?

According to the Coalition’s own documents, the lowest price people will pay each month for connecting to its NBN alternative is $50.

All business-grade services which rely on fibre will be unavailable to those with copper as will features like multicast. You won’t be able to pay for premium Gigabit speeds as they won’t exist for most people. While the Coalition is saying that customers should be able to eventually pay for their own fibre connection (prices mentioned have varied between $2000 and $5000) the take up will be dramatically lower than with an ubiquitous NBN.

Furthermore, provisions will need to be made with regards to the copper PSTN phone network which Telstra is currently decommissioning. The NBN allows you to choose which phone provider to go with (there’s already significant competition), but those left with copper will likely need to stick with the Telstra monopoly. That’s assuming Telstra wants to get back into the telephone business. The Coalition appears to have forgotten all about the nation’s telephone network and the vast costs involved in operating and maintaining it along with the requirement for restructuring the entire industry and hoping Telstra will let the government use its copper and exchanges. We’ll cover these challenges in separate articles. The Register has been chasing answers in this space for some time already.

Either way, the cost of renting a Telstra-like phone line and making calls will need to be added to many users’ monthly bills whereas much cheaper plans are available through the NBN (especially when bundled with internet packages).

This gives cause for concern.

The current NBN plans sees $27bn being invested on behalf of the tax payer but as can be seen, if the average revenue per user is met (and it doesn’t look particularly ambitious – especially with business customers being included in the figures) then the tax payer gets all of that money back plus around seven per cent profit.

However, the Coalition still seeks to spend $20bn of public money on its alternative but it isn’t clear how that will be repaid. According to its own figures, average revenue per user will be $38 per month by 2021 (compared to NBNco’s $62).

Not only is it unclear what services users will be paying premiums for under the Coalition (the lack of ubiquitous fibre is limiting), the Coalition is also inviting companies to install their own competitive networks. History shows us that private companies only target profitable areas (e.g. the Telstra and Optus’ HFC rollouts). But doing this undermines NBNco’s ability to generate income (revenue per user) and repay the public. We’ll be covering this more in future articles.

There are many questions that need answering with regards to the Coalition’s policy. However, for now, we can say that the facts unequivocally show that claims of higher internet costs are misleading and claims that costs will go up over time, are not true.

More in this category: « Telstra buying cloud services company Kloud VIDEO: Nokia can connect rural areas to boosted LTE with ‘FastMile’ »
Share News tips for the iTWire Journalists? Your tip will be anonymous