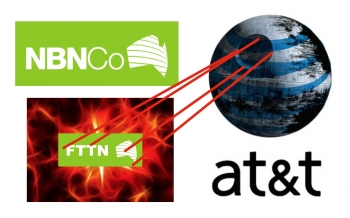 US mega-telco AT&T has decided to deploy FTTP to 2 million US homes over 4 years despite the ‘extraordinary cost’ as FTTN is just too slow.

AT&T will switching to an FTTP rollout for 2 million homes in the US over the next four years, once its acquisition of DirecTV is complete, even though FTTN is much cheaper than the ‘extraordinarily costly’ but vastly faster FTTP alternative.

AT&T quotes figures in its submission to the FCC (PDF link) that its ‘FTTN-based broadband services that in most areas are capacity limited today to 45 Mbps (and nowhere exceed 75 Mbps)’ are just too slow compared to competitive FTTP services that in many places in the US are already offered at 1Gbps speeds.

Google, Cox, Century Link, SuddenLink, Bright House and AT&T itself are the players already offering 1Gbps FTTP services. AT&T’s is called GigaPower 1, but it is only available in 100 markets, while Comcast already offers at least 100Mbps services in all its markets.

Better yet for Comcast it is rolling out 2Gbps connections in Atlanta to be switched on by May 2015, showing just how slow at 45 to 75Mbps FTTN service is - even when compared to now standard 100Mbps FTTP connectivity.

So, AT&T says FTTN is too slow but FTTP is ‘extraordinarily costly’.

With DirecTV under its belt, AT&T says it will have many customers to which it can sell content and services, giving it the customer base and the scale that it needs to justify and pay super-expensive FTTP, which profits from its resulting customers will also help pay for.

AT&T also mentions that using the DirecTV network to deliver video will free up a commercially undisclosed percentage of bandwidth that will make its FTTP products even faster.

However, even though this would be the case on an FTTN connected customer using DirecTV for video delivery as well, it isn’t enough for AT&T to bother with to cling to FTTN technology given FTTP is so much faster and all of AT&T’s major competitors are offering it.

Clearly, OTT video delivered by Netflix, consoles, iTunes or anything else won’t come via DirecTV’s network so would naturally benefit from either a faster FTTN or FTTP connection, but for AT&T, at least, FTTP is preferable - and they’re going to pay to deploy it once DirecTV goes through.

As AT&T’s roll-out of FTTP to 2 million customers will be done over a four year period, it’s clearly on an NBN-style timeframe of years and not weeks or months.

Naturally, it shines a very bright light on Australia’s FTTN deployment, even though FTTP is going into greenfield areas and an expensive FTTP upgrade will be available to FTTN users if they want to pay for it.

It has been widely reported that the Coalition Government’s MTM or multi-technology mix only ends up being a few billion dollars cheaper than an FTTP deployment.

Yes, we’re in deficit and this would only add to it, but why is Australia actively building to become the FTTN laggard in an FTTP world? We will be at a serious connectivity disadvantage to the rest of the world when an FTTN network is already going to cost tens of billions of dollars?

Our Asian neighbours deployed FTTP long ago, and we can see its wide and continuing deployment in the US.

It’s not too late for Australia to re-board the FTTP bandwagon. While wireless technologies such as pCells from Artemis Networks, which has been described as ‘mobile fibre’, and the 5G wireless standard due to launch in 2020, the base stations for these wireless networks still need a fibre connection, and there’s nothing wrong with having a fully wired and wireless world.

We still live in a wired world that needs upgrading to fibre speeds and technologies, because unless we’re going to deploy pCells en-masse across Australia to build the world’s most advanced wireless network, we have to upgrade our wired technologies.

If it’s only going to cost a few billion more than what it will cost to upgrade to FTTN instead, then we’re truly mad if we don’t just drop this whole FTTN deployment completely and get on with finishing the FTTP process.

Salt states in the media release: “Our research identifies a new generation likely to emerge in the 2020s – GenNBN – the first generation of young Australians raised to maturity in a supremely connected world powered by universal access to fast broadband.”

But it seems to me that GenNBN will be arriving very late to Australia, with GenNBN in Asia, the US and elsewhere happening right now thanks to the widespread availability of 100Mbps and growing availability of 1Gbps+ FTTP fibre connections.

In the meantime while millions upon millions of Australians linger on ADSL2+ connections, and even in some cases, 3G/4G wireless due to the lack of even ADSL.

With NBN Co stating in its GenNBN media release “nbn announced earlier this month that work to build the broadband network for more than one-third of Australians would be completed or underway within the next two years. The company aims to provide access to fast broadband for all Australians by 2020”, two thirds of the Australian population will still be without any upgraded connection after two years.

Most of the FTTN network hasn’t even been built yet. It’s not too late to go FTTP by 2020. What a shame we’ll end up with most FTTN by that time, while today’s 2Gbps connections get even faster as millions of Australians end up on a slow hiding to FTTNothing.

More in this category: « Big changes ahead for ‘super-connected’ next generation, says NBN M2 trumps TPG bid for iiNet with $1.85 billion scrip plus cash offer »
Share News tips for the iTWire Journalists? Your tip will be anonymous