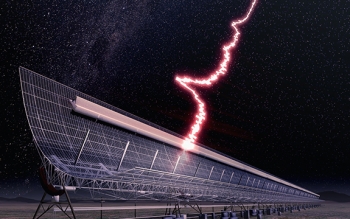 A Swinburne University PhD student has built an automated system that uses artificial intelligence (AI), which the university says revolutionises the ability to detect and capture fast radio bursts (FRBs) in real-time.

Wael Farah, a fourth year PhD student, developed the FRB detection system and is the first person to discover FRBs in real-time with a fully automated, machine learning system.

The Melbourne-based university says Wael Farah’s system has already identified five bursts – including one of the most energetic ever detected, as well as the broadest.

FRBs are mysterious and powerful flashes of radio waves from space, thought to originate billions of light years from the Earth. They last for only a few milliseconds (a thousandth of a second) and their cause is one of astronomy’s biggest puzzles.

Farah’s results have been published in the monthly notices of the Royal Astronomical Society.

He trained the on-site computer at the Molonglo Radio Observatory near Canberra to recognise the signs and signatures of FRBs, and trigger an immediate capture of the finest details seen to date.

Farah says his interest in FRBs comes from the fact they can potentially be used to study matter around and between galaxies that is otherwise almost impossible to see.

“It is fascinating to discover that a signal that travelled halfway through the universe, reaching our telescope after a journey of a few billion years, exhibits complex structure, like peaks separated by less than a millisecond,” he says.

Molonglo project scientist, Dr Chris Flynn says: “Wael has used machine learning on our high-performance computing cluster to detect and save FRBs from amongst millions of other radio events, such as mobile phones, lightning storms, and signals from the Sun and from pulsars.”

The FRBs were found as part of the UTMOST FRB search program - a joint collaboration between Swinburne and the University of Sydney, which owns the Molonglo telescope.

More in this category: « Pivotel makes US double acquisition, flags further acquisitions Activist group launches campaign against Apple censorship in China »
Share News tips for the iTWire Journalists? Your tip will be anonymous