The REA Group, a global online real estate advertising company, has said it will cancel a number of sex-associated domain names which have been acting to redirect traffic to its site.

Founded in 1995, REA Group is a public company listed on the Australian Stock Exchange and majority-owned by News Corp Australia, a subsidiary of News Corp. The company's market value was more than $17 billion as of this writing.

iTWire was told by a reliable industry source that REA owned numerous domain names with sex-related names which redirected traffic to realestate.com.au.

Two of these names are FindNudeDude.com and FindNudeDude.com.au. A third is SexOnline.com.au. As seen from the registration details, they are owned by REA Group. Both were redirecting to realestate.com.au on Tuesday, but the redirects now appear to have been removed. The company, however, contests the fact that the sexonline domain offered a redirect to the realestate.com.au website.

Asked about this, an REA Group spokesperson responded: “The domain names in question were part of the Group’s domain name portfolio as a result of historic activity or acquisitions dating back 10 to 20 years." 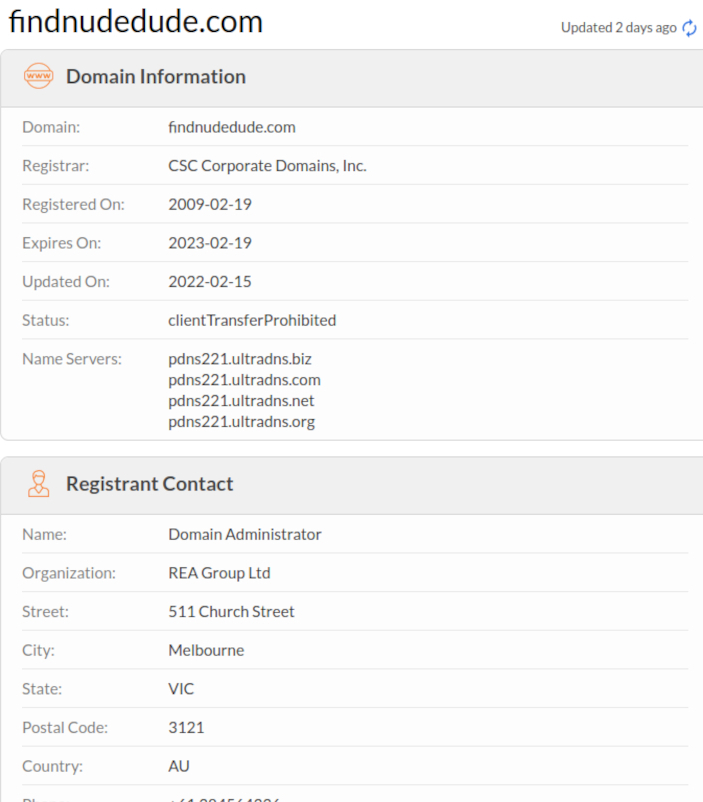 The domain findnudedude.com was registered on 19 February 2009 and expires only next February.

The sexonline.com.au domain was also redirecting to realestate.com.au at the time iTWire looked at it on Tuesday, the redirection had ceased by the time the REA Group reacted.

The spokesperson added: "They [the domain names] are not required and we’ve instructed our domain name registrar to cancel them.”

Both domains were updated two days ago, as can be seen from the two screenshots in this article.

More in this category: « The Big Middle offers SaaS to the mid-market Amazon bid to settle stoush with Indian retail group fails »
Share News tips for the iTWire Journalists? Your tip will be anonymous